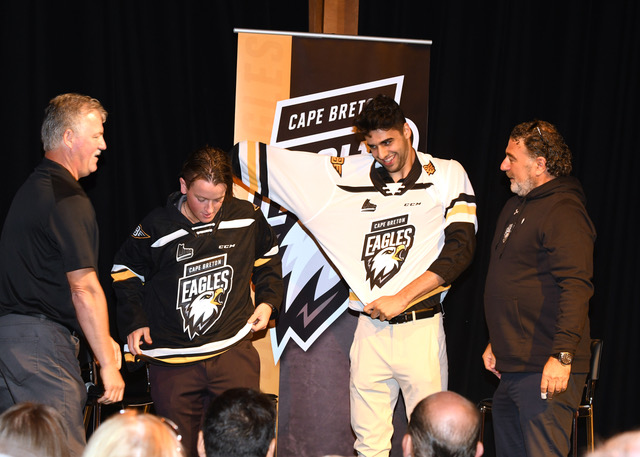 Today, during a standing-room only celebration at Centre 200, Irwin D. Simon,
Eagles Board Chairman, and Gerard Shaw, Eagles President, announced that the Cape Breton
Screaming Eagles will be renamed the Cape Breton Eagles and unveiled the team’s new logo.
Following the announcement, fans were introduced to staff and players and got a sneak peak of
the 2019/2020 merchandise, as well as signage throughout the rink.

“Today is a defining moment for the Cape Breton Eagles. Our new brand reflects who we are as
a team. We’re bold. We’re confident. And we’re aggressive in our pursuit to win,” says Simon.
“Over the past nine months, since I became Chairman of the Board and majority shareholder, we
have listened to the wants of our fans, sponsors and ticket buyers. This feedback has been
instrumental in the changes we have made to the organization. Thank you for your support…this
one’s for you!”

“This is a very exciting time for Eagles fans and myself. As a newcomer to the Eagles
organization, I can feel the enthusiasm and anticipation as we head into this new season,” says
Jake Grimes, Head Coach, Cape Breton Eagles. “Training camp starts this week and our players
have trained hard for this opportunity. They have all expressed their desire to maximize their
seasons and I look forward to watching them compete at training camp. I invite you to be part of
the action and join us for our pre-season games against the Halifax Mooseheads on Tuesday,
August 20th and the Moncton Wildcats on Thursday, August 22nd at 5pm at the Membertou Sport
and Wellness Centre.”

“As we build momentum leading into our new season, I want to thank our fans and supporters.
Many of you have been loyal to us for the past twenty years and, I know, you’ll be with us for
the next twenty years and beyond. Our players and our staff are eager to see you cheering in the
stands and proudly wearing the new Cape Breton Eagles brand,” says Gerard Shaw, President,
Cape Breton Eagles. “I also want to thank our staff. Changes like these don’t happen overnight.
Our staff have been working diligently to make all of this possible. Everyone in our organization
shares a common goal of creating the best fan experience possible.”

The first home game of the Cape Breton Eagles regular season is September 28th, 2019 at 7pm
against the Saint John Sea Dogs.