Sokolov Recognized for an Outstanding Season by the QMJHL 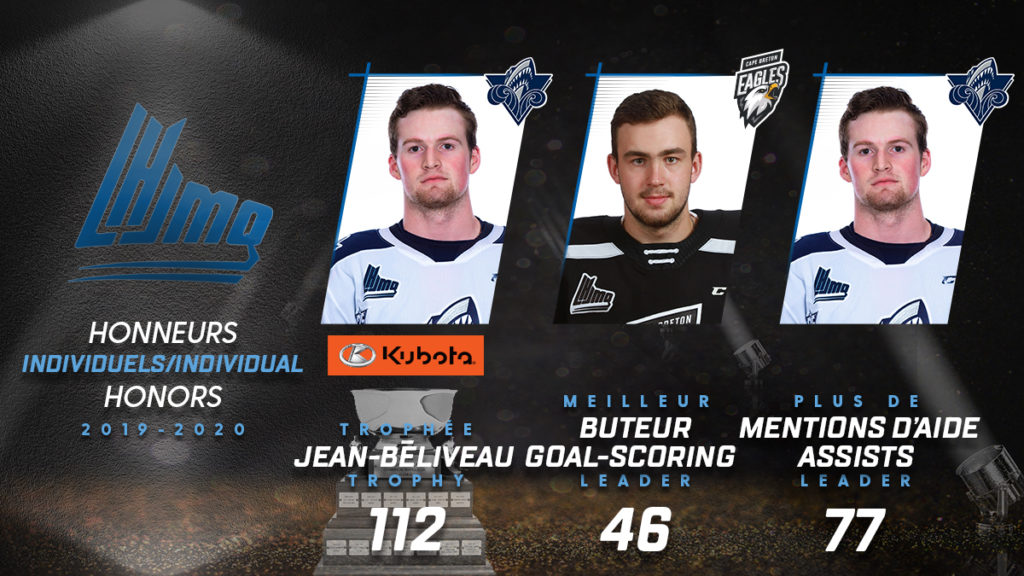 LONGUEUIL, QC – As promised yesterday, the league continues to recognize the top performers of last season. The best offensive seasons are featured today as the Quebec Major Junior Hockey League highlights the players who ended the 2019–2020 campaign in pole positions for points, goals and assists.

The Jean-Béliveau Trophy is handed every year to the top point-getter of the regular season. It’s named after Hockey Hall of Famer and Trois-Rivières native Jean Béliveau, a hockey legend who managed to cumulate more than 1,200 points in the NHL. Past recipients include current NHL stars such as Anthony Mantha, Sean Couturier, Sidney Crosby and Yanni Gourde.

The projected number one pick in the next NHL Entry Draft, Alexis Lafrenière, is the 2019–2020 recipient of the Jean-Béliveau Trophy presented by Kubota. The Rimouski Océanic captain registered 112 points in only 52 games (2.15 points per game), as the young sensation missed a few games to lead Canada to gold at the World Junior Hockey Championship. The St-Eustache, Quebec native also dominated the assist category with 77 helpers throughout the season. At the finish line, Lafrenière finished 13 points and 10 assists ahead of Moncton Wildcats forward Alexander Khovanov, who faced Lafrenière with Team Russia in the World Juniors final.

Another Team Russia member excelled in the past few months with the Cape Breton Eagles. Egor Sokolov, a winger listed at 6’4”, topped the league for the most goals scored in the regular season and outperformed Sherbrooke’s Alex-Olivier Voyer by two goals, despite playing in 11 fewer games. The Yekaterinburg, Russia native registered a league best 10 game-winning goals and scored only eight of his 46 tallies on the power play.