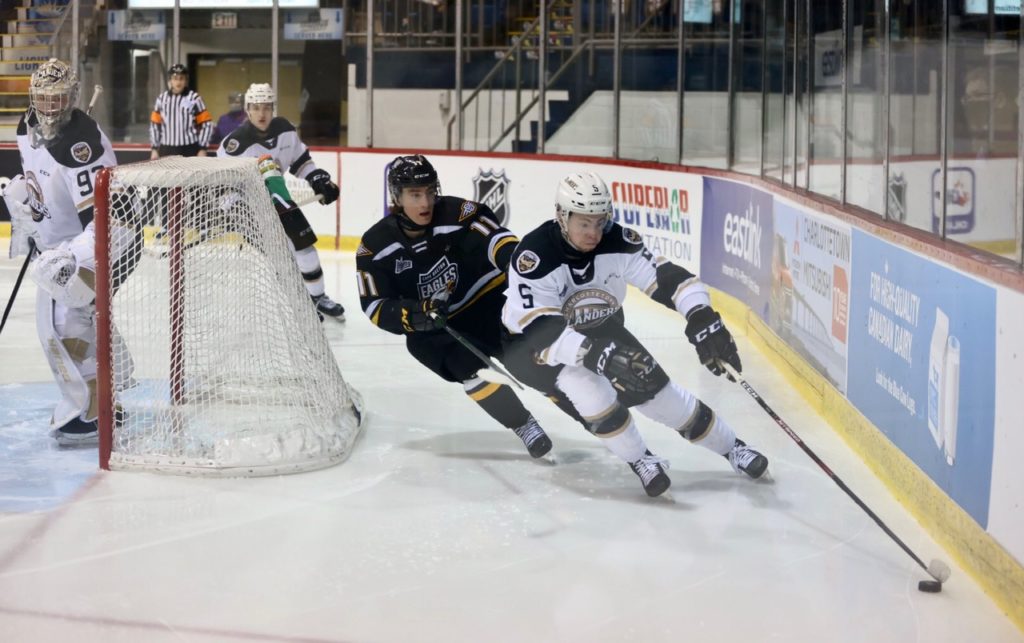 It was a tough night for a short staffed Cape Breton Eagles team in an 8-2 loss to the Islanders in Charlottetown.

Both teams would get opportunity on the man advantage in the opening period. While the Eagles couldn’t score on their first power play, it was a different story when Charlottetown went to the man advantage. 25 seconds into a hooking minor against Jacob Squires, Lukas Cormier fired a shot from the blueline that redirected off of Félix Paré and by Nicolas Ruccia. Charlottetown would take a 2-0 lead to the break when Brendan McCarthy buried a rebound in front of the goal in the final three minutes of the frame.

Special teams would play a factor in the first portion of the middle stanza. Thomas Casey pushed the lead to 3-0 on a tap in pass on the man advantage from Brett Budgell. The Eagles would counter with their own play play marker as Dawson Stairs ripped a shot from the left circle that Colten Ellis couldn’t get across in time to stop.

Unfortunately for the Eagles, Charlottetown would get things done five on five the rest of the period. Cédric Desruisseaux scored a pair of goals just over four minutes apart- first converting a one timer from Casey, and then cutting through the slot to make it 5-1. A Patrick Guay shot found its way by Ruccia not long after and spelled the end of the night for the Eagles netminder as William Grimard came in in relief.

The Eagles showed some pushback in the early part of the third period as Liam Kidney finished a cross-ice pass from Mark Rumsey to get the Eagles second goal of the evening. However, the goal would be countered by Patrick Guay just after the six minute mark, the first goal on Grimard on the evening. The night’s scoring would be finished on a tipped power play shot by McCarthy.

Due to injuries, the Eagles dressed 16 skates including affiliate players Michael McQuaid and Kian Bell. The game also marked the return to the lineup for Nathan Larose, who missed the prior three games to injury- he had an assist, was -2 and registered five shots in his return.

Ellis picked up the win, stopping 24 of 26 shots in the win. Ruccia took the loss, allowing six goals on 23 shots, while Grimard stopped 20 of 22 shots in relief.

The Eagles will finish their weekend road swing tomorrow as they visit the Halifax Mooseheads at 4 PM. The game will be broadcast on Eastlink Television and will also be streamed online, available for purchase at qmjhl.neulion.com/qmjhl. You can also hear all the action beginning with the pre-game show with Patrick McNeil at 3:30 PM on 1270 AM CJCB or online at www.cjcbradio.com

Final Shots On Goal: 45-26 in favour of Charlottetown