Q & A with Loic Leduc

Q1: Tell us about your Minor Hockey career.

A1: I played my minor hockey in Chateauguay, Quebec, in each category (novice to midget). We won championships and tournaments. During my Peewee ‘AA’ year, we went to the biggest International tournament in the world in Quebec City, Quebec. Among 56 teams we made to the final four.

Q2: Where did you play your Midget hockey?

A2: I played my Midget year for the Patriotes Midget Espoir in Beauharnois, Quebec. It is a city 15 minutes from my home. It was quite a journey with this team, winning a championship and one tournament. Five guys from that team have been drafted in the Quebec Major Junior Hockey League. I did not played ‘AAA’ hockey because the following year I made the Screaming Eagles.

Q3: Were you always defensemen? When did you start playing defense? Why?

A3: I started to play defense at the start of Peewee. I made this decision because during  summer ‘AAA’ hockey I played the position and I enjoyed right from the start. My height certainly helped me to be where I am today.

Q4: You were born in Châteauguay, Quebec however your home town is Mercier, Quebec. Tell us a little bit about Mercier.

A4: My home town is Mercier, Quebec. It is a small city suburb of 10,000 people which is on the South Shore of Montréal. We have a lot of farm market garden produces.

Q5: Who is the one person you would like to thank for getting you where you are today with the Cape Breton Screaming Eagles? Why?

A5: I would like to thank my Dad and my Mom who supported me all those years. My dad coached me during my minor hockey and also registered me in numerous hockey school’s or summer hockey. They made a lot of sacrifice and I am very grateful.

Q6: Tell us some interesting facts about your family.

A6: I have a one 20 year old brother (Arnaud), we are very close each other. My mom and dad both have their bachelor degree . My mom is a former nurse, she is now working in the administration side for a hospital. My dad is a national business manager for Agropur Division Natrel which is a cooperative manufacturing milk products. My dad is also involved in all sports. He played on the national Canadian team in Handball.

Q7: During the off-season, How did you prepare for the upcoming season?

A7: I’m very fortunate, one of my former Coaches in the ‘AA’ level built a gym for hockey players in the area. I worked with a personal trainer and a group of players from the Quebec Major Junior Hockey League. We trained together all summer.

Q8: This is your second season with the Screaming Eagles. What do you believe you bring to the hockey club?

A8: I hope I bring some passion and excitement. I am getting more confidence while I am on the ice. The future is looking good in Cape Breton.

Q9: What two cities in the ‘Q’ do you like playing in. (one in the Maritimes and one in Quebec) Why?

A9: In Québec, it would have to be Rimouski. It is great organization and the people are as passionate as Eagles fans and also because my grandfather comes from the area. For the Maritimes there is no place better than Cape Breton.

A10: The people are very kind. I’m very pleased to be playing for the Screaming Eagles. 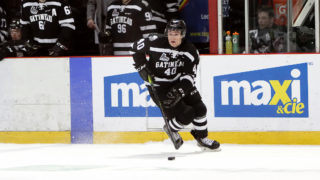 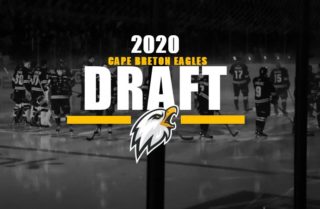