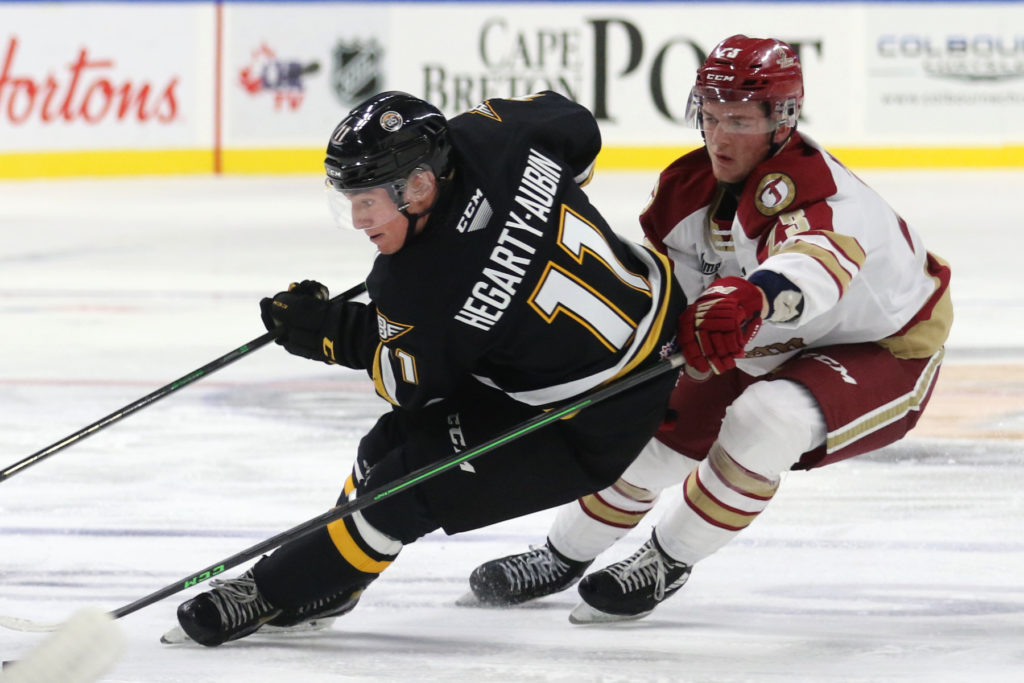 New eras will begin for the Cape Breton Eagles and the Acadie-Bathurst Titan tonight as the clubs begin a rare sequence of three consecutive games against each other. In what is certainly an even rarer occurrence, it’s an in-season matchup between teams with two men making their debut as head coaches.

Hopes were high for the Acadie-Bathurst Titan this season, but the Northern New Brunswick club currently finds itself eighth in the Eastern Conference with a record of 10-10-2 (6-4-2 at home).  Following a 6-2 loss in Charlottetown on November 20th, the axe fell on head coach Mario Durocher.  Assistant coach Greg Leland posted a 1-1 record in the interim, but tonight marks the debut of Jason Clarke as head coach. Prior to the 2021-22 season, Clarke spent 12 years as head coach of the Jr. A  Carleton Place Canadians before making the jump to the QMJHL to become an assistant coach with the Shawinigan Cataractes.

Another “new” face in the Titan lineup is Hendrix Lapierre, who was acquired in the off-season from Chicoutimi.  Lapierre cracked the roster of the Washington Capitals to begin the NHL season, and was still in the US capital during the lone meeting between the Eagles and Titan this season (a 2-1 overtime victory for Bathurst in Sydney on October 11th.)  Lapierre was held goal-less in his five games in Bathurst colours, but lit the lamp and notched two assists in the club’s 8-3 win over Baie-Comeau on Sunday.

(Lapierre is one of four NHL drafted forwards on the club, along with Riley Kidney (Montreal), Cole Huckins (Calgary), and Jacob Melanson (Seattle).  Import goaltender Jan Bednar is also a draft pick of the Detroit Red Wings.)

For the Eagles, the new head coach is a familiar face coming to the helm under unusual circumstances.  Earlier this week Jake Grimes announced his resignation from the job for personal family reasons, and Anthony will serve as the head coach in the interim.  Grimes, Anthony, and assistant coach Chris Culligan all joined the Eagles coaching staff at the beginning of the 2019-20 season.  With Anthony making the jump to head coach, Eagles assistant general manager John Hanna is serving as an interim assistant coach.  Hanna was previously an assistant coach for the Eagles during the 2008-09 & 2009-10 seasons.

The Eagles find themselves at the bottom of the league,with a mark of 6-14-4 (4-6-2 on the road.)  With a very young roster in place, injuries to key veterans have wounded the previously-Grimes coached club.  The Eagles played Sunday’s game against Rouyn-Noranda without a single 20 year old in the lineup.  All three have made the trip to Bathurst, but it’s unsure if any will play.

Lucas Canning is also not on the trip due to an upper body injury, and as a result the team has once again recalled Luke Patterson.  Patterson, who is tied for the league lead in scoring in the New Brunswick/PEI Major Under 18 league, made his QMJHL debut on Sunday.

Tonight’s game is available for purchase online at https://watch.chl.ca. You can also hear all the action beginning with the pre-game show with Patrick McNeil at 6:30 PM on 1270 AM CJCB or online at www.cjcbradio.com