Mooseheads Top Eagles In Wild One In Halifax 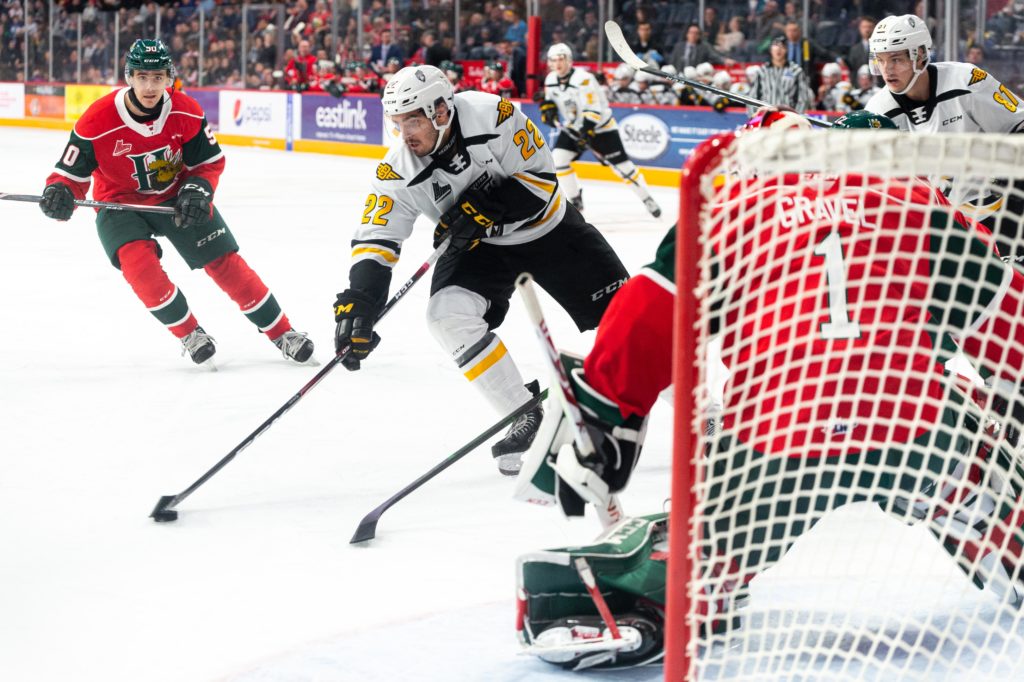 The Halifax Mooseheads finally got the better of the Cape Breton Eagles in a wild 6-5 game at the Scotiabank Centre in Halifax on Friday night.

The first period didn’t give any indications that it would be so high scoring, although one player in particular enjoyed the first 20 minutes. After opening the scoring at the 7:28 mark, Maxim Trépanier found himself on a breakaway and beat Wiliiam Grimard to push the lead to 2-0. They were the only goals in the opening period.

Despite starting the second period short handed, the Eagles had the first big chance of the second period when Derek Gentile was denied on a stellar stick save by Alexis Gravel, and then put the rebound over the net. However the Eagles did strike first in the middle stanza courtesy of Shawn Boudrias. Halifax restored the two goal margin though on a power play goal by Benoit-Oliver Groulx. Groulx was looking to set up Trépanier for the hat trick before the puck hit Kyle Havlena in front of the goal and bounced by Grimard.

Both teams would score again before the end of the middle stanza. Jeffrey Burridge converted a cross-crease pass to give Halifax a three goal edge. Egor Sokolov scored late in the period to pull the Eagles back within two.

The Eagles made a goaltending change to start the third period, as Kevin Mandolese made his first appearance in the Cape Breton net since October 31st. He was welcomed to the game by a one timer by Groulx on the power play, giving Halifax a 5-2 advantage.

Once again the Eagles would push back. Félix Lafrance cashed in on a rebound of a Boudrias shot before the eight minute mark, and with more than nine minutes remaining Brooklyn Kalmikov backhanded a shot that come off the end boards past Gravel to bring Cape Breton within one.

There were still twists and turns yet to come. With 1:34 to play, Eagles coach Jake Grimes lifted Mandolese for an extra attacker. Looking for the hat trick, Groulx fired the puck towards the open cage but Ryan Francis got in front of it. Despite fully blocking the shot though, the puck bounced off the Eagles forward and slowly trickled over the goal line.

A special teams situation created another last gasp for the Eagles. Patrick Kyte was called for delay of game after putting the puck over the glass, and with Mandolese back out the Eagles had a 6 on 4. Sokolov ripped a shot by Gravel with 30 seconds to go and it was a one goal game once more.

Unfortunately for the Eagles though there was no tying goal to be found, despite late pressure, and for the first time in four tries this season Halifax skated away from the Battle of Nova Scotia with the W.

Mandolese was tagged with the loss, stopping seven of eight shots coming on in relief of Grimard, who stopped 27 of 31. Gravel picked up the win, turning aside 34 of 39.

The same two teams will do battle tomorrow night at Centre 200. Puck drop is at 7 PM, and tickets can be purchased at the Centre 200 box office, by phone at 902-564-2200 or online at https://tickets.capebreton.ca/Online/default.asp

Final Shots On Goal: 40-39 in favour of Halifax