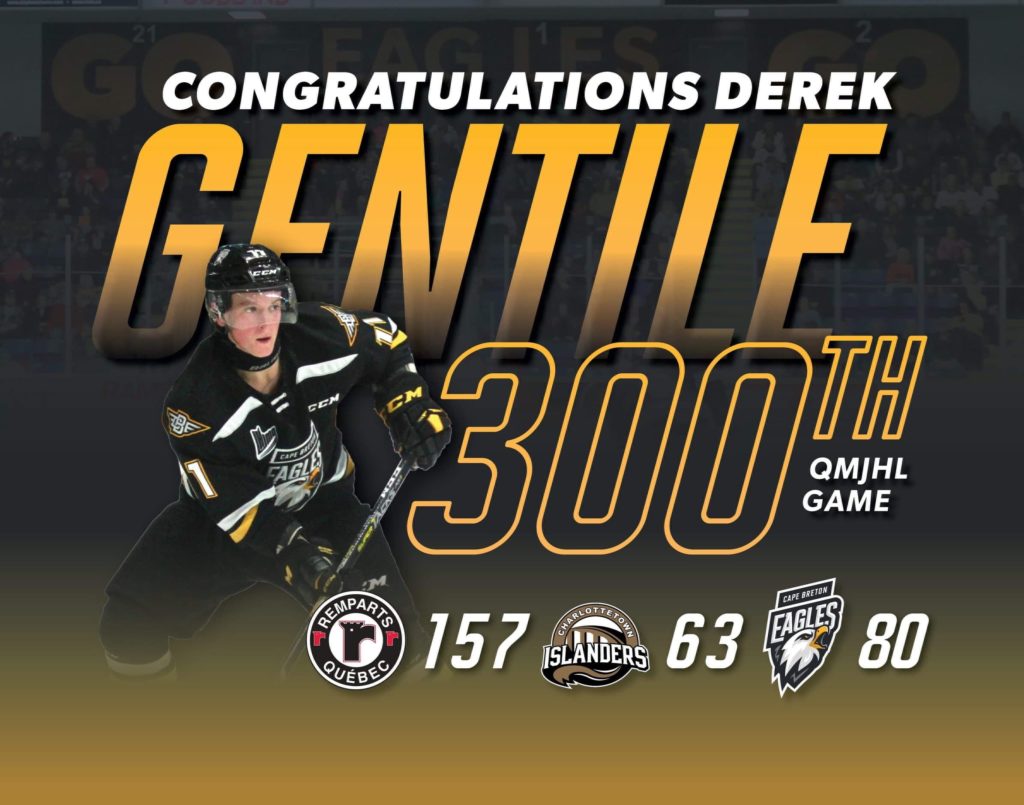 Cape Breton Eagles captain Derek Gentile will skate into history when he hits the ice at the Centre Marcel Dionne in Drummondville. Today will be his 300th regular season game.

Gentile was acquired by the Eagles last year from the Charlottetown Islanders. The forward will be playing in his 80th game with the Eagles. The first 157 matches on his journey came with the Québec Remparts, followed by 63 with Charlottetown before the Sydney native moved to his home town team.

The 20 year old forward will join two other Cape Breton born players who appeared in their 300th QMJHL games as Eagles- Gentile’s childhood friend Mitchell Balmas, and current Eagles assistant coach Chris Culligan. Others to hit the milestone in a Cape Breton uniform are Frédéric Bélanger, Jordan Clendenning, and Kevin Asselin (who is celebrating his 35th birthday today).

In 79 career regular season games thus far with the Eagles, Gentile has 66 points in 79 games (including 44 points in 49 games this season.). He has worn the “C” as team captain for 11 games, having been given the honour on January 10th before a five assist game against the Saint John Sea Dogs.

Gentile and his Eagles teammates are in action today when they visit the Drummondville Voltigeurs. Puck drop is 4 PM Atlantic time, and you can hear all the action beginning with the pre-game show with Patrick McNeil at 3:30 PM on 1270 AM CJCB or online at www.cjcbradio.com. Go Eagles Go!

Eagles Back On Home Ice Tonight Against Titan
5 days ago