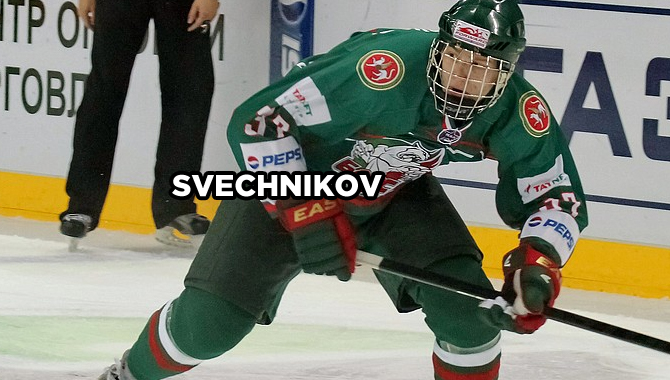 Sydney – The Screaming Eagles second round pick at the 2013 Canadian Hockey League Import Draft, Evgeny Svechnikov, has confirmed he will play in Cape Breton next season.

Svechnikov, who played for AK Bars Kazan organization last season in the Kontinental Hockey League (KHL) and split his time between the top team and the junior team, is a 6’2, 195lb forward born October 31st, 1996. His NHL draft eligibility will be in June 2015.

“I want to thank the AK Bars organization for an excellent experience last season,” said Svechnikov. “It is a great place to play and I am very grateful to the Club President, management, staff and fans. I am thankful to be given the opportunity to move on to Cape Breton.”

Evgeny will join former teammate and Russian Maxim Lazarev with whom he played his entire minor hockey up to the 2012-2013 season. Svechnikov was the 2nd overall pick at the KHL draft in 2013.  “Maxim told me he loved his year in Cape Breton,” said Svechnikov. “He felt the support, teachings and environment were very conductive to learning hockey and life skills”, he added, indicating also that it was a dream come true to be able to play in North America.

“I am excited to be joining the Screaming Eagles and I can’t wait to meet all my new teammates,” said Svechnikov. “I want to help the team win. I am told they are some very good players returning next season and that the team has been growing well in the last 12 months. Based on what I am told, we will be among the best teams next season and I am glad to be able to contribute. My future is in good hands”.

Evgeny Svechnikov will be present in Sherbrooke this weekend as the QMJHL entry draft takes place.