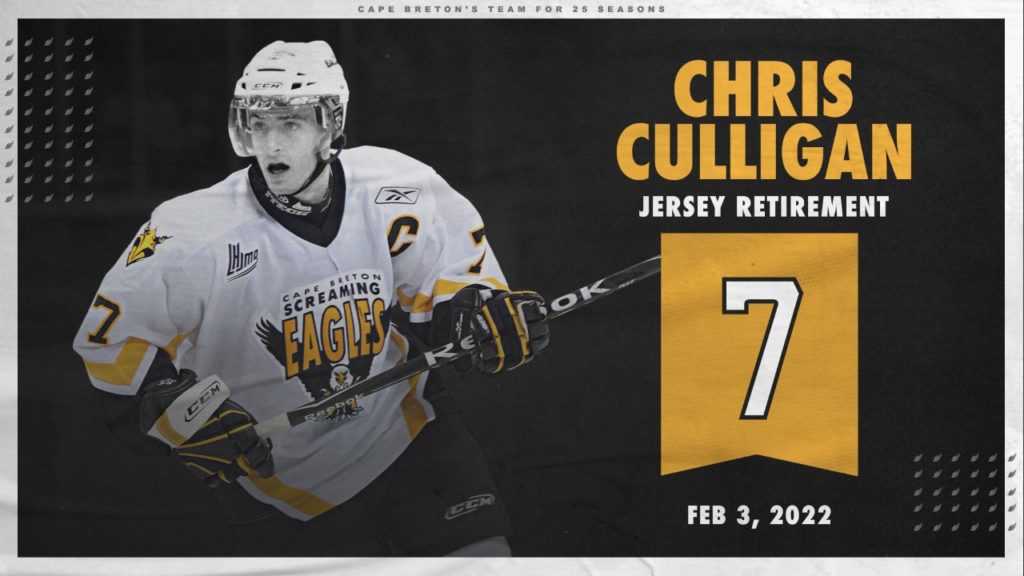 In his five seasons with the Eagles franchise and beyond, Chris Culligan has given everything he has to the club and hockey on Cape Breton Island. And on February 3rd, 2022, against the arch-rival Halifax Mooseheads, his legacy will be cemented as his #7 is  retired at Centre 200, to stand alongside Marc-André Fleury’s #29.

“Honestly I’m still figuring out exactly what this means to me,” said Culligan upon learning about the upcoming jersey retirement.  “There is a pretty remarkable person with their jersey already hanging in the rafters so to share that space with him will be pretty surreal. I can’t imagine getting used to that too quickly.”

It was with Fleury on his way to the pros that Eagles staff prepared for the 2004 draft.  At the time, league rules permitted the selection of 16 year old’s only in the first five rounds. The scouts obviously saw something they liked in Chris Culligan’s game, but they couldn’t imagine what a steal they had on their hands when he was chosen in that fifth round.

“If I wasn’t on the ice, I was at home, laying down resting. I was pretty serious about it and it worked out for me,” described Culligan, in a 2007 interview, about his rookie training camp in 2004.  “It seemed like we always had guys injured so I played a lot for a 16 year old.  I got a lot of experience in a short period of time.”  In addition to stepping up for his new team when they needed him, in January of 2005 Cape Breton’s #7 was a key part of the bronze medal winning Team Atlantic Canada at the World Under 17s.  It was the only time the region would capture a medal at the event against traditional powers like Ontario, Quebec, Russia, Sweden and the USA.

Pressure in big situations would never phase the talented centreman, as was the case in the 2007 President’s Cup semi-finals. The Eagles were tied at one game a piece with the Val-d’Or Foreurs, and knotted at four in overtime in game three at Centre 200. Culligan found a hole in the Foreur defense in the neutral zone, was then promptly taken down and awarded a penalty shot.  He  swung slightly right and then cut back to the middle as he approached the top of the circles- then zipped past the hashmarks and wired the puck over the glove side of Jeremy Duchesne, sending 4000 fans into euphoria after the biggest goal in team history. (Among those in the crowd were future Eagle Derek Gentile, who would wear the “C” during Chris’s first year on the Eagles coaching staff.)

Culligan was team captain himself in 2008-09. “I just try to lead by example,” said the then 20 year old forward in 2009.  He may not have fancied himself as a big talker, but he put his money where his mouth was- showing significant leadership on and off the ice. The “Culligan Cares Campaign” in 2009 was a fundraiser for the Cape Breton Regional Hospital’s Cancer Centre that raised over $22,500.

At the heart of Culligan Cares Campaign was Chris’s pledge to donate a dollar for each point he collected in his QMJHL career. The number 284 was not only the beginning of a successful fundraiser- a number matched by former teammates, fans, and team sponsors- it was also a milestone.  To this date Chris Culligan leads the Eagles in all-time points, games played, and assists in both the regular season and playoffs.  Excelling defensively as well as on offense, his career +/- rating of 71 also is an all-time franchise best.

Ever after the sport pulled him away the island, Cape Breton remained his true home. In 2012, in the midst of a spectacular university hockey career with UNB, Culligan did a 16-week off-season internship with the Eagles as part of his Bachelor of Kinesiology degree.  “To this day still have a lot of passion and pride for the organization” said the then UNB Varisty Red forward in 2012.  “When it came time to complete my internship, the Eagles were an obvious choice.”

Joined by a half-dozen Eagle teammates during his five year stint in Fredericton, Culligan rolled in the accolades: a two year team captain, three times a CIS all-star, three AUS titles, two CIS championships, and a gold medal as captain of Team Canada in the World University Games.  His hometown connections followed him around for three championship seasons of professional hockey in Cardiff- playing and living with Sydney’s Joey Haddad, another former Eagle teammate.

Culligan’s transition to coaching immediately landed him in a familiar location.  Returning to his former U18 team the Cape Breton Tradesmen (now the Sydney Rush), he stressed giving back to the community.  “I’m looking forward to having the opportunity to help some kids in Cape Breton and hopefully give them some chances and opportunities I’ve had in hockey,” said the new Tradesmen assistant coach in 2017.  When he earned a promotion to become the Rush’s director of hockey operations in 2019, the Howie Centre native elaborated,  “I want our players to have better opportunities to succeed than I did- it’s all about continuous improvement.”

Back at Centre 200 behind the bench as Eagles assistant coach, the desire continues to burn to have success as an Eagle for Chris Culligan.  “I think it’s still there in me, trying to that chase that championship with the Eagles,” he said shortly after taking his current job.  And now as he reflects upon his playing days and gets ready to look at his number in the rafters, in trademark Culli fashion, he’s more than willing to share his glory.  “This organization has given me some of the best years of my life and with that comes countless friendships that continue to be a big part of my life today,” says the club’s career leading scorer.  “To me this is a representation of everyone who has helped shape me as a person, in hockey and out. This is a massive credit to those people”.

Those memories will now take the physical form of a banner at Centre 200- cementing the contributions thus far- and still to come- of Chris Culligan to the Cape Breton Eagles franchise.