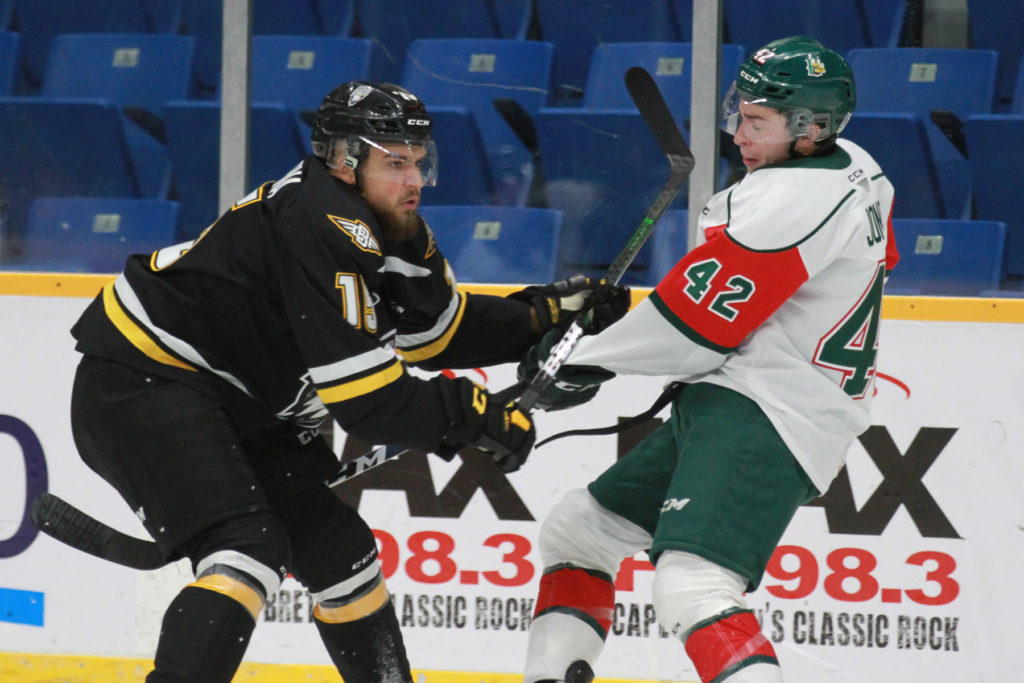 For the fourth time this season, the QMJHL’s battle of Nova Scotia takes the stage. Thus far this fall, the Cape Breton Eagles have had the better of the Halifax Mooseheads this season, and that’s been the difference between the two teams in the QMJHL standings. Tonight’s game is the first half of a home and home as the two sides will play in Sydney on Saturday night.

Coming into this evening’s game, the Eagles are fifth in the Eastern Conference with a record of 16-10-2 (7-4-1 on the road) while Halifax is in sixth place at 13-12-3 (5-6-2 at home). The Eagles are ahead of the Mooseheads by five points as a result of the season series because Cape Breton has defeated Halifax three times this season, all in regulation. Two of the wins have come in Halifax, and were brought routs in favour of the visitors: 8-2 and 7-1 victories.

Halifax has improved since that last meeting, with a 6-4-2 record since the most recent loss to Cape Breton. Three Mooseheads- Raphaël Lavoie, Benoit-Olivier Groulx, and Jared McIssac- recently received good news as the trio were named to Team Canada’s World Junior training camp. McIssac suffered an injury at Detroit Red Wings camp this summer, and just returned to action against Blainville-Boisbriand on Sunday.

Two other Mooseheads were named to this past week’s QMJHL team of the week. Overage forward Maxim Trépanier had seven points over three games, while goaltender Alexis Gravel had a 951 save percentage over two appearances.

While all the potential Team Canada players will be in the lineup for Halifax this weekend, they’ll be without their imports: Senna Peeters is gone to represent Austria at the Division 1A World Juniors, while Marcel Barinka is skating for the Czech Republic at the World Junior A Challenge. The Mooseheads will also miss Justin Barron, a potential first round NHL draft choice this year, as he is out indefinitely with a blood clot.

The Eagles will have their imports in the line-up this weekend, including Egor Sokolov who’s also coming off a team of the week appearance (six points in three games) and having been named to Russia’s training camp for the World Juniors. Sokolov had two assists in Sunday’s victory over Maritime Division leading Moncton.

It was a new look for the Eagles forward group on Sunday, as Shawn Boudrias was taken off the line with Sokolov and Ryan Francis. Gentile took his place on that line, with Boudrias was placed with Mathias Laferrière and Félix Lafrance. It was a big game for Laferrière, who has been limited to nine games due to illness and injury. With a goal and an assist it was his first multi-point game of the season. Last season Laferrière notched 74 points in 68 games.

Puck drop for tonight’s game is at 7:00 PM, and you can catch all the action beginning with the pre-game show at 6:30 with Patrick McNeil on 1270 CJCB (or online at cjcbradio.com). The game will also be broadcast on Eastlink Television. Go Eagles Go!