Eagles Topped 4-2 By Shawinigan At The Nest 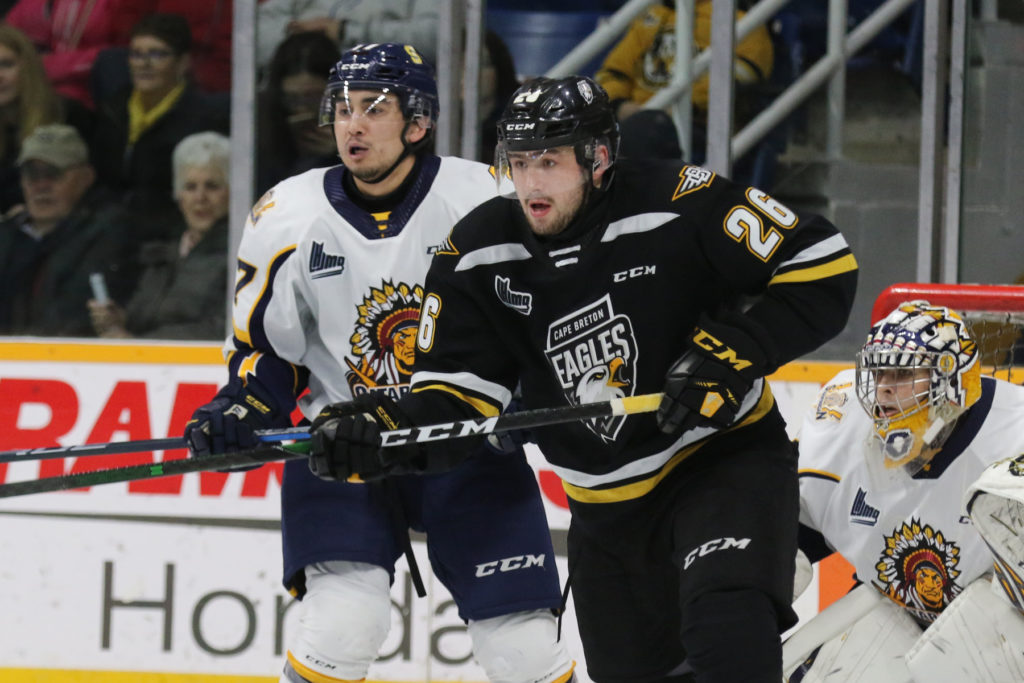 A slow start was a bad omen for the Cape Breton Eagles as the club was topped 4-2 by the Shawinigan Cataractes on Thursday night.

Shawinigan carried the first period of play and would be rewarded with the game’s opening goal. Kirill Nizhnikov saw his shot on goaltender William Grimard hit the post- but it bounced off the back of the Eagles goaltender’s pad and over the goal line.

It was the only blemish on a great period for Grimard as Shawinigan outshot Cape Breton 17-6. The Eagles best chance was not on goal, as Ivan Ivan backhanded a puck off the crossbar- the puck came back to Derek Gentile’s side of the net, but with an open goal in front of him Gentile couldn’t settle the bouncing biscuit and the Eagles trailed 1-0 at the break.

Things would open up in the second period, as Grimard’s fine play continued and the Eagles would earn themselves a number of odd man rushes. Egor Sokolov found himself on a breakaway coming out of the penalty box, but fired wide of the net. Later in the period, Shawn Boudrias would make no such mistake on a breakaway, going with a wide deke on his forehand to beat Antoine Coulombe. It was tied at 1 after 40 minutes.

After neither team was able to connect on their first three power plays, the man advantage would end up providing the last go ahead goal of the game. From the top of the right face-off circle Mavrik Bourque found Xavier Bourgault at the side of the goal, and he tapped it by Grimard to give Shawinigan the lead.

The ice continued to be titled as Shawinigan took the night’s first two goal lead with under eight minutes to play. Kirill Nizhnikov won a battle along the boards, moved the puck down to Gabriel Denis behind the net, who fed Vasily Ponomarev in front for the eventual game winning goal.

With three minutes to play Eagles coach Jake Grimes lifted Grimard for the extra attacker. The Eagles could not score in the next minute but would be given hope with exactly sixty seconds to play following a timeout. A shot by Nathan Larose bounced off Shawn Boudrias and by Coulombe to cut the lead to 3-2. It was reviewed to see if the puck was kicked in, but it proved to be a good goal and it was a 3-2 game.

However the Eagles could not get any closer. With seven seconds left to play and nothing but a hail mary left from the Eagles zone, Derek Gentile tried to wire the puck the length of the ice- but the pass was intercepted by Bourque who put it into the empty net to make a 4-2 final.

Coulombe stopped 20 of 22 shots in the victory. Grimard turned aside 43 of 36 in addition to the empty netter.

The Eagles five game home stand finishes up on Sunday afternoon when they host the Moncton Wildcats. Puck drop is at 4 PM.Tickets can be purchased at the Centre 200 box office, by phone at 902-564-2200 or online at https://tickets.capebreton.ca/Online/default.asp

Final Shots On Goal: 47-22 in favour of Shawinigan