Eagles Topped 2-1 By The Sags At The Nest 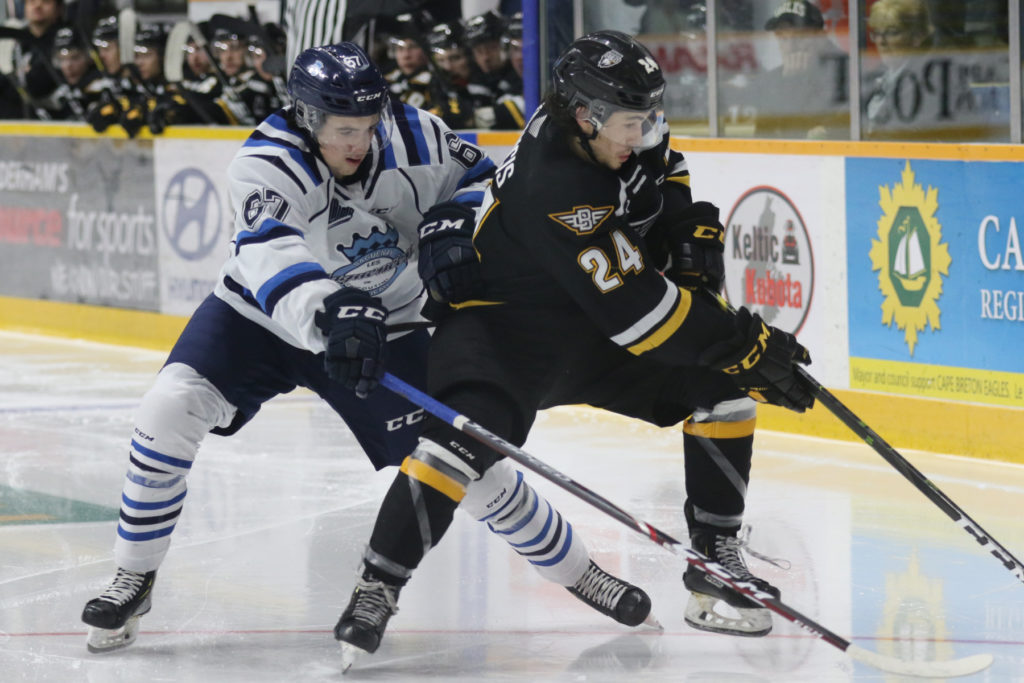 It was the second hard fought 2-1 game in the space of 24 hours at Centre 200, but this time the Eagles fell on the wrong side of the result in a 2-1 defeat to the Chicoutimi Saguenéens.

It was the Chicoutimi power play that struck first, with just over five minutes to play. Ethan Crossman passed the puck down the left side of the ice, behind the net to Samuel Houde. Houde fired the puck to the right face-off circle and Rafaël Harvey-Pinard finished the one timer. Having outshot the Eagles 17-10, Chicoutimi led 1-0 at the first break.

The Eagles would generate the bulk of the shots and chances in the next two periods, but it was the visitors that scored the only goal in a middle frame that would be dominated by special teams. Ryan Francis took at tripping penalty at the 8:45 mark, and for the rest of the period there would only be 42 seconds of 5 on 5 play.

With Francis in the box, Shaun Miller was given a five minute major penalty for slashing and a game misconduct. The bulk of his major was not spent 5 on 4 though. After the Francis penalty expired, Félix-Antoine Marcotty was sent off for interference. However in the late stages of the Marcotty penalty, Francis was whistled again, this time for slashing to create a brief 4 on 3 and then an extended 5 on 3.

Technically the Eagles would kill the 5 on 3 off, but Connor Trenholm (who was serving the Miller major) had just returned to the ice when Christophe Farmer put a shot through traffic and by William Grimard, following an extended series of puck movement. The Eagles had back to back power plays to finish the middle frame but couldn’t convert on either one.

Period three would have a pedestrian beginning, but the Eagles would soon get their chances, all 5 on 5 (the only penalty of the period was a too many men on the ice penalty to Cape Breton). One golden opportunity came when Derek Gentile came in on a breakaway, shot wide, but fired his rebound back to Nathan Larose- who was denied with a stellar glove save by Alexis Shank. Shank and Grimard were sharp all game long, allowing nothing easy.

The home side would get a break to get back into the game with just over four minutes remaining in the third period. Francis took the puck behind the net and flipped it back to the point to Logan Kelly-Murphy. Kelly-Murphy fired the puck towards the goal, and it bounced off a Chicoutimi defenseman and over the head of goaltender Shank. It was Kelly-Murphy’s first goal in the QMJHL and put the pressure on the Sags.

With 2:01 remaining in the third period, Eagles coach Jake Grimes called a timeout and lifted Grimard for an extra attacker. While the Eagles would get more time in the Chicoutimi end, they were unable to find a tying goal and the Saguenéens escaped with the victory.

The Eagles home stand continues on Wednesday night when they play host to the Saint John Sea Dogs. Puck drop is at 7 PM, and tickets can be purchased at the Centre 200 box office, by phone at 902-564-2200 or online at https://tickets.capebreton.ca/Online/default.asp

Final Shots On Goal: 39-35 in favour of Cape Breton