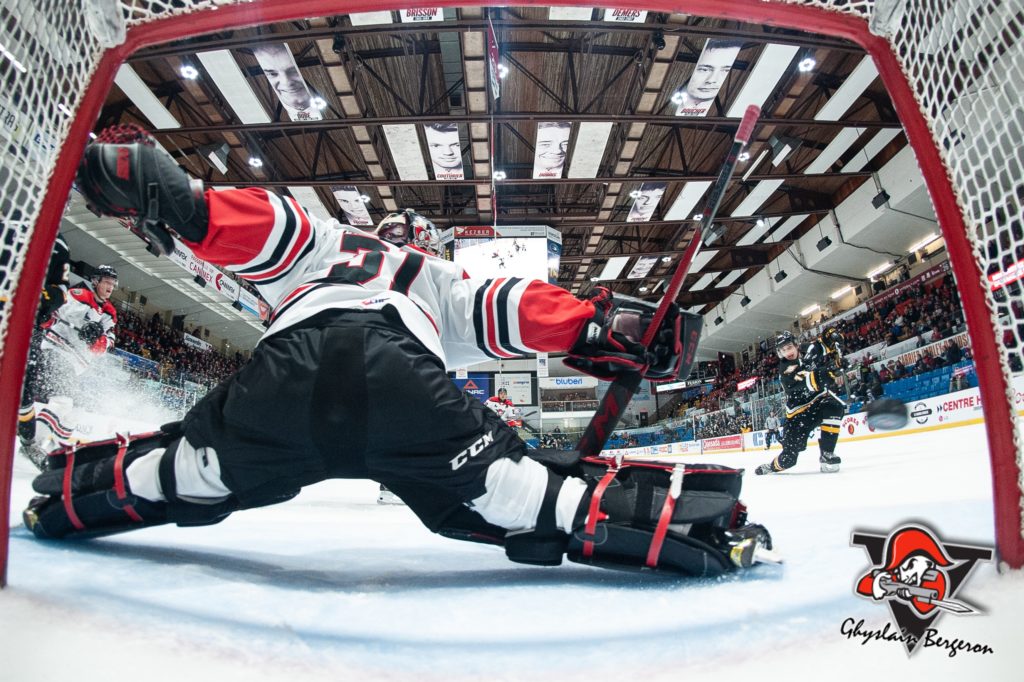 The combination of Egor Sokolov and Mathias Laferrière, along with strong penalty killing led the Cape Breton Eagles to a 6-4 victory over the Voltigeurs on Sunday in Drummondville.

There were no shortage of talking points and the fun started early as Shawn Boudrias raced in on a breakaway to beat Anthony Morrone just 23 seconds into the game. However, after a lengthy review, it was deemed the play was offside and it remained a scoreless game.

It would be a 1-0 lead for the visitors, though- before the halfway mark Laferrière finished a pass from Sokolov on the left side of the net to beat Morrone. Jérémy Lapointe tied the game for the home side and it appeared it would be a 1-1 game heading to intermission.

But with the teams playing the last 17 seconds of the opening frame at 4 on 4, the Eagles took advantage of the open ice. Sokolov dished the puck to Francis on the right side of the ice, who darted in front of the goal to beat Morrone with a backhand to give the Eagles the lead.

Lapointe was at it again early in the second period, tying the game. Then special teams would become a talking point of the night. With Logan Kelly-Muprhy in the box, a rebound bounced out to Xavier Simoneau who beat William Grimard to give Drummondville their first lead of the night.

The Volts would have an extended man advantage later in the period as Eagles forward Derek Gentile, playing his 300th game in the QMJHL, was given a game misconduct for high sticking. But the only goal on the five minute power play was a short handed one- Tyler Hinam setting up Félix Lafrance on a 2 on 1 and it was a tie game going into the final 20 minutes.

To begin the third period the Eagles killed the rest of the major off, and then less than a minute later took control of the game when Egor Sokolov wired a one timer shot just inside the Drummondville net. The goal came 5 on 5 but there would be very little 5 on 5 played in the following ten minutes or so.

With a minor penalty already called on Kelly-Murphy, Shawn Boudrias collided knee on knee with Charles-Antoine Dumont. Boudrias was given a major penalty and the Eagles were faced with a full two minute 5 on 3. This turned into a 4 on 3 when William Dufour was given a tripping minor. Once play returned to 5 on 4, the home side finally had their power play goal on five minute major: former Eagles Isiah Campbell setting up Lapointe for his first career hat trick.

The Eagles killed the rest of the penalty and it was a tie game approaching the 15 minute mark. Once again it was Sokolov setting up Laferrière for a one timer from the slot and the Eagles took their fourth lead of the game.

Morrone was called to the bench in the final minute of the third period for a 6 on 5 situation as Drummondville searched for a tying goal. The Eagles held them at bay, and it was former Voltigeur Jarrett Baker- playing his first game back in Drummondville after spending three seasons with the Volts- who hit the empty netter to secure the victory.

The Eagles will now take a few days off before the road trip resumes in Val-d’Or. The Eagles will visit the Foreurs on Wednesday night and puck drop is at 8 PM. You can hear all the action beginning with the pre-game show with Patrick McNeil at 7:30 PM on 1270 AM CJCB or online at www.cjcbradio.com

Final Shots On Goal: 33-27 in favour of Cape Breton