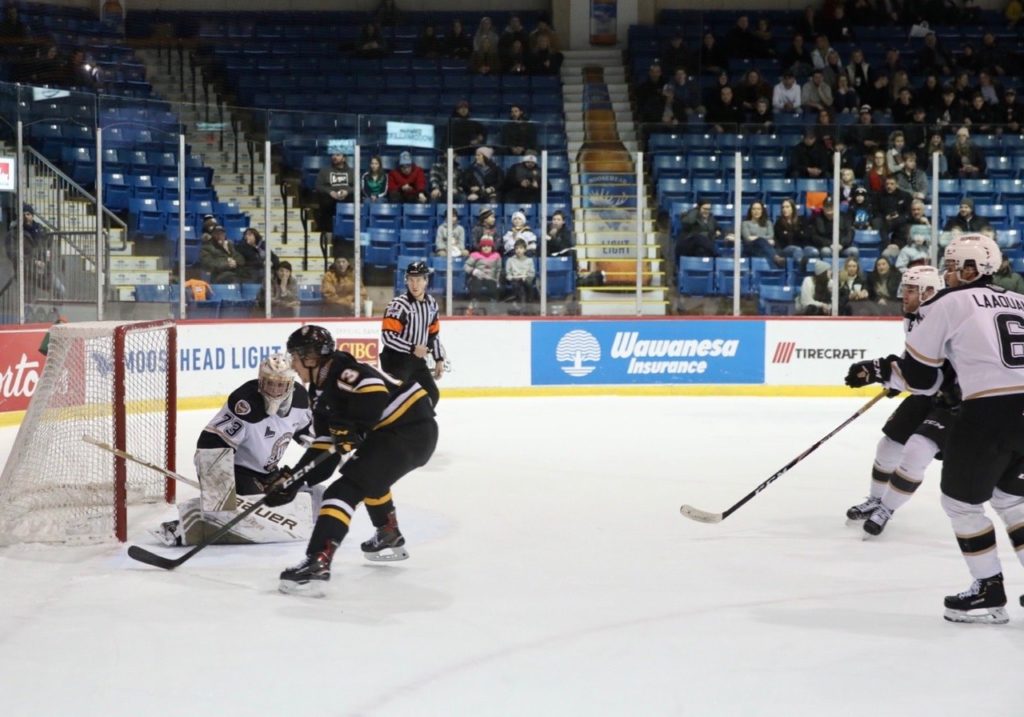 The Cape Breton Eagles broke their tie in the standings with the Charlottetown Islanders in the first of a two game set on PEI on Friday night. The Eagles topped the Islanders 5-2 to move two points clear of their rivals from another island in the Maritime Division.

The Eagles thought they had the breakthrough goal when Félix Lafrance tipped a point shot by Adam McCormick by Matthew Welsh, but it was waived off due to a high stick. Then the Eagles had a four on three opportunity- originally the Eagles were going to be short handed, but the Islanders sent too many players on the ice when Welsh went to the bench for the extra attacker. Liam Peyton was then sent off for hooking but the visitors couldn’t capitalize on the opportunity.

Instead it was the home team that struck first, as a nice individual effort saw Peyton come up the right wing and lifted the puck over Kevin Mandolese for the game’s opening goal. Charlottetown had a chance to double their lead with their first man advantage, but it was the Eagles that scored short handed. Welsh was caught misplaying the puck twice on the power play and the second time the puck ended up on the stick of Shawn Element. Element fired the puck towards the empty goal, Islanders defenseman Brendon Clavelle attempted to clear it away, but instead directed it into the open net and it was tied at one after 20 minutes.

The Eagles assumed control early in the middle stanza as Mathias Laferrière put the puck just under the crossbar before the two minute mark. The lead doubled when when Egor Sokolov made a cross crease pass to Shawn Boudrias, who tapped it in for a 3-1 advantage.

The Eagles penalty kill was tested later in the frame when, with Connor Trenholm in the box for four minutes for high sticking, Tyler Hinam put the puck out of play for delay of game. Zachary Beauregard cashed in on a rebound at the side of the net early in the two man advantage to make it 3-2 but the Eagles stood tall on the rest of the penalty kill and held the lead going into the third period.

Just as was the case in the second, the Eagles scored early in the third- this time Sokolov beating Welsh. The goal was a milestone for Cape Breton forward Shawn Boudrias, who drew the assist for his third point of the night, and 200th point of his career. The Eagles defence held, not allowing Charlottetown any shots for the first 14 minutes of the final period.

Charlottetown would have a pair of opportunities- two cross bars- within a minute late in the third period. The Islanders were unable to cash in however and Shawn Element would put the game on ice with his second goal of the game with under four minutes to play.

Mandolese stopped 25 of 27 shots in the victory, while Welsh allowed five goals on 39 shots in taking the loss.

Cape Breton’s Ryan Francis and Charlottetown’s Lukas Cormier were both expected to play in Friday’s game, but both were unable to make the game due to travel issues. The two players took part in the CHL Top Prospects Game Thursday night in Hamilton and were aboard a flight there was redirected back to Ontario- both hope to play for their respective teams tomorrow.

The same two teams will go at tomorrow night in Charlottetown at 7 PM. You can hear all the action beginning with the pre-game show at 6:30 on 1270 CJCB or online at cjcbradio.com.

Final Shots On Goal: 39-27 in favour of Cape Breton