Eagles Return To Home Ice To Take On Islanders 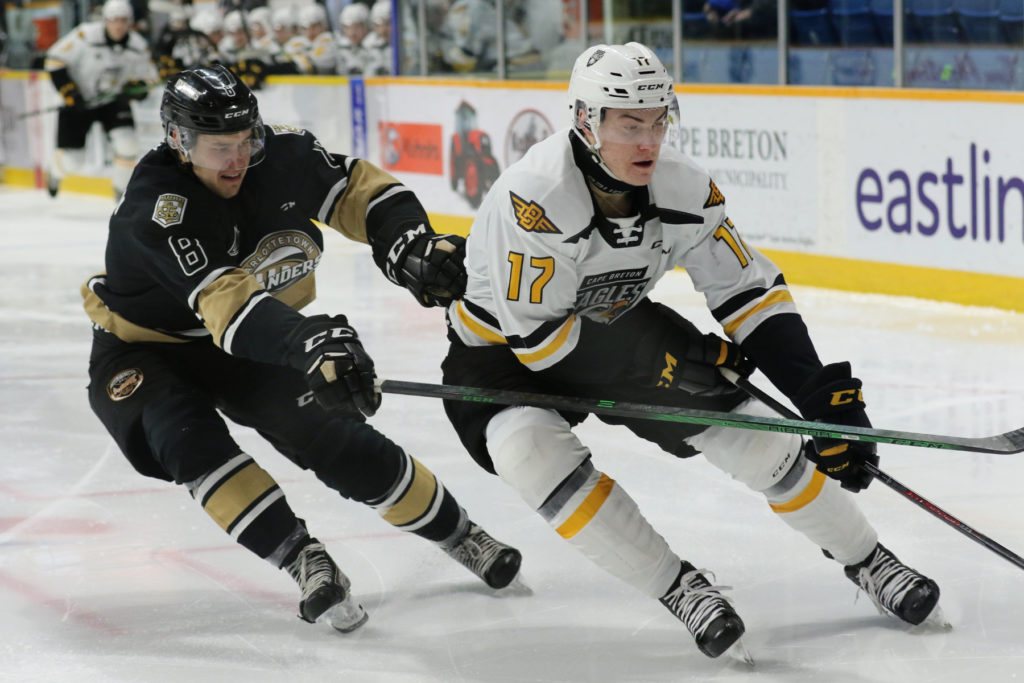 The Cape Breton Eagles will conclude the most recent portion of the QMJHL schedule as they complete a home and home series with the Charlottetown Islanders. It marks the Eagles first home game since March 24th.

The two clubs tangled on Sunday in Charlottetown, a game that was tied at 3 with eight seconds remaining in the the middle period. A late goal from Cédric Desruisseaux put the Islanders en route to a 7-3 victory.

Charlottetown was also in action on Tuesday, scoring a decisive 8-1 victory at home over Halifax. The Islander depth was on full display as eight different players scored in the win, and all but two skaters registered points. However, it was a victory that came at a cost in relation to tonight’s game, as a line brawl led to three Charlottetown players getting suspended. Forwards Patrick Guay and Bailey Peach, primarily second line forwards after coming over in a deal with Sherbrooke, and second pair defenseman Oscar Plandowski will miss tonight’s game.

The Islander top line continues to click on all cylinders with Cédric Desruisseaux, Thomas Casey, and Brett Budgell currently placing 1, 2, 3 in league scoring. Desruisseaux and Casey have 74 & 71 points respectively, while no one else in the league has reached 60.

The Eagles are hoping to build off of having a more healthy lineup, having returned forwards Félix Paré and Matthew MacDonald along with defensemen Jérémy Langlois and Logan Kelly-Murphy last game in Charlottetown. (Langlois scored in his return to the lineup.) While Nathan Larose is unlikely return to action tonight, it is expected to be the first time the Eagles dress 18 healthy skaters from the team’s regular roster on home ice in the year 2021.

Even if not playing, Larose will be a key part of this evening’s festivities as the Eagles honour him, Paré, and captain Jarrett Baker as outgoing 20 year olds in what could potentially be their final home regular season game.

Tonight’s game begins at 7 PM. There is now limited availability to purchase tickets for Eagles home games- full details can be found at https://bit.ly/3jmSmML. The game will be broadcast on Eastlink Television and you can also hear all the action beginning with the pre-game show with Patrick McNeil at 6:30 PM on 1270 AM CJCB or online at www.cjcbradio.com