Eagles To Finish Three In Three in Drummondville 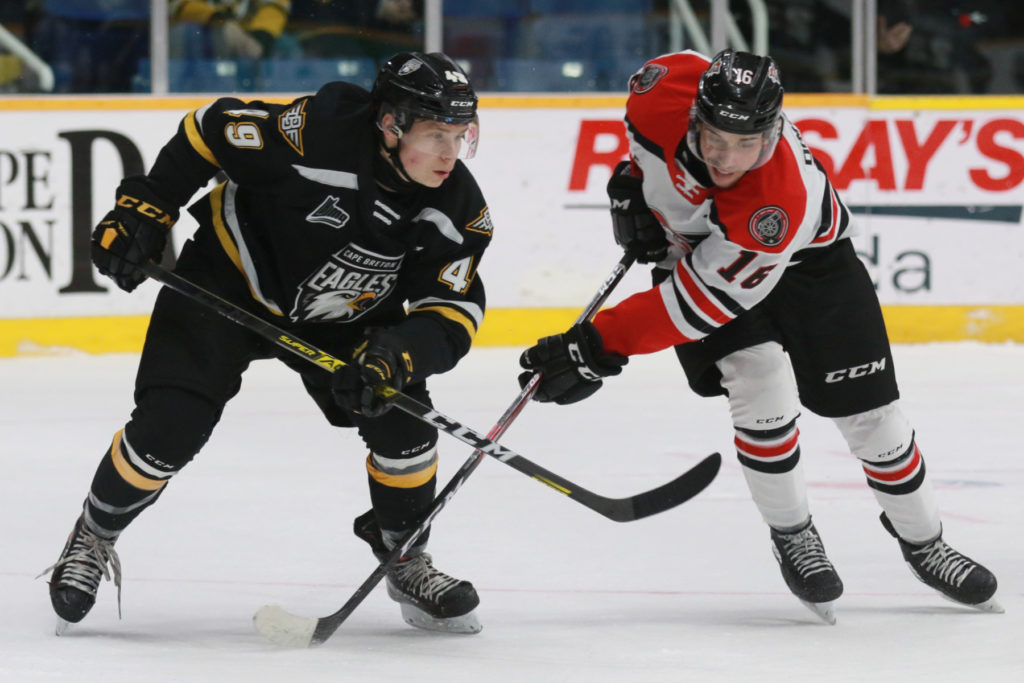 The Cape Breton Eagles will hit the halfway mark of a six game road trip, and conclude a three game in three nights stretch, as the club visits the Drummondville Voltigeurs this afternoon. The Eagles road trip hit a snag to start with a 3-0 loss in Quebec on Friday but the team rebounded with a 5-1 win in Blainville-Boisbriand on Saturday.

Coming into today’s game, the Eagles are fourth in the Eastern Conference with a record of 32-15-3 (12-9-2 on the road). Drummondville is third in the Western Conference with a record of 28-21-2, playing 15-10-1 at home. It’s the second and final meeting between the two sides as the Eagles routed the Volts 8-3 on November 10th in Sydney. Drummondville has consistently been in a home ice playoff position in the Western Conference this year but has a losing record since the second half of the season began, and the team parted ways with Team Canada player Dawson Mercer.

The Eagles jumped back into the win column yesterday in Blainville-Boisbriand thanks to a hat trick from Mathias Laferrière. Egor Sokolov added three assists, getting back on the scoresheet after a 15 game point streak ended on Friday night.

Today will be a special day for a pair of Eagles players: for captain Derek Gentile, it will be his 300th regular season game in the QMJHL. For defenseman Jarrett Baker, it’s a homecoming of sorts. Although from Cape Breton, the blueliner was chosen in the fifth round by Drummondville in the 2016 draft and spent three years with the Voltigeurs before being dealt to Cape Breton this past June. This season Baker has 30 points in 49 games with a +27 rating.

Thus far this season Voltigeurs captain Xavier Simoneau has led the way for his side, with 65 points in 50 games. (Former Eagle Isiah Campell has also added 22 goals to the Drummondville attack in 2019-20). Going the other way in the Mercer swap was first round draft pick William Dufour, and he has 32 points in 47 games in his 17 year old campaign and is a key part of Drummondville’s future.

Puck drop for today’s game is 4 PM Atlantic time, and you can hear all the action beginning with the pre-game show with Patrick McNeil at 3:30 PM on 1270 AM CJCB or online at www.cjcbradio.com. Go Eagles Go!