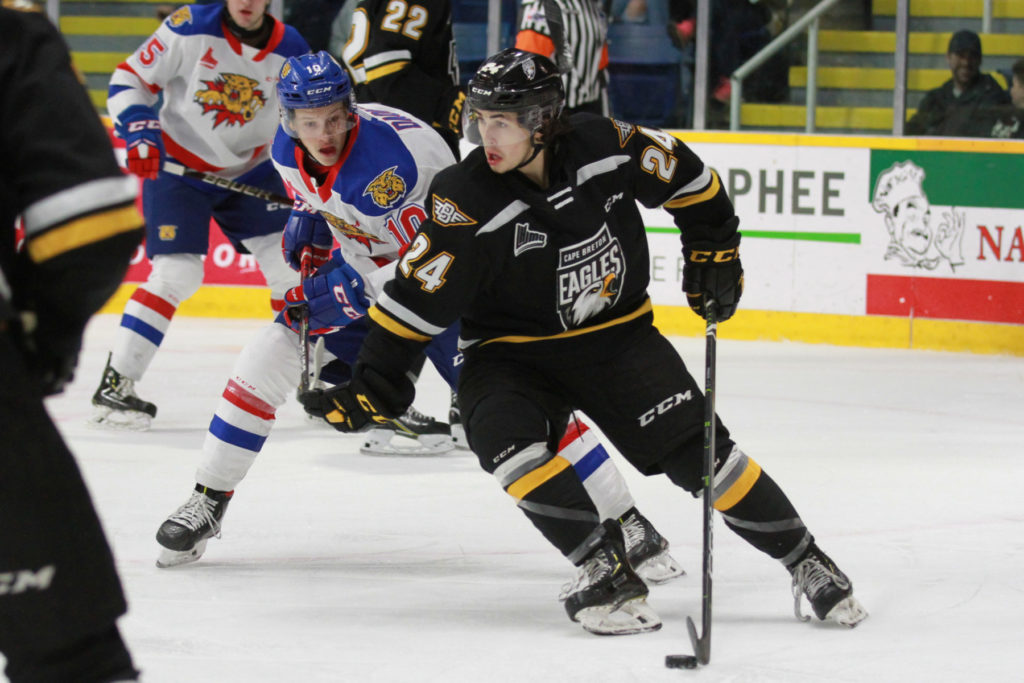 It was a Halloween night to forget for the Cape Breton Eagles in a 10-4 loss to the Moncton Wildcats.

The game started fast with both teams scoring early- Jeremy McKenna for the visitors finding himself alone in front of the net, putting a backhand over William Grimard. Ryan Francis tied the game with a shot low along the ice but the rest of the period belonged to Moncton.

Christian Huntley gave the Cats a lead they wouldn’t lose with a shot through traffic, and then Jakob Pelletier made it 3-1 before the halfway mark. The second half of the period would offer more Wildcats offence.

Alexander Khovanov, like McKenna earlier, scored during 4 on 4 play by coming off the wing and sweeping around Grimard to make it 4-1. Grimard’s night would appear to end as Tristan DeJong finished a passing play in front of the goal to make it 5-1.

Kevin Mandolese came into the Eagles goal and was welcomed with a tricky shot off the boards by Mark Rumsey. Mika Cyr added to the lead and it was 7-1 by the end of the first frame.

Both teams scored twice in the middle stanza. Kyle Foreman converted a pass at the side of the goal from Ozzie King to make it 8-1. The Eagles would show some pushback with a pair of goals- Félix Lafrance with the Eagles second of the night, and Shawn Boudrias scored with a shot from above between the circles. But prior to the end of the period, Khovanov got the goal back for Moncton on a play in which Kevin Mandolese appeared to have some difficulty getting up.

Grimard came back into the game to open the third period, but was welcomed by an early goal from Pelletier. Egor Sokolov would score after the 12 minute mark to cut the lead to 10-4, and conclude the night’s scoring.

Olivier Rodrigue stopped 30 of 34 shots in the win. Grimard took the loss, allowing six goals on 19 shots, while Mandolese allowed four goals on 20 shots during his sting in relief.

The back end of the home and home between these two teams will take place on Saturday night when the Eagles visit the Wildcats on Saturday at 7 PM. You can hear all the action beginning with the pre-game show with Patrick McNeil at 6:30 PM on 1270 AM CJCB or online at www.cjcbradio.com