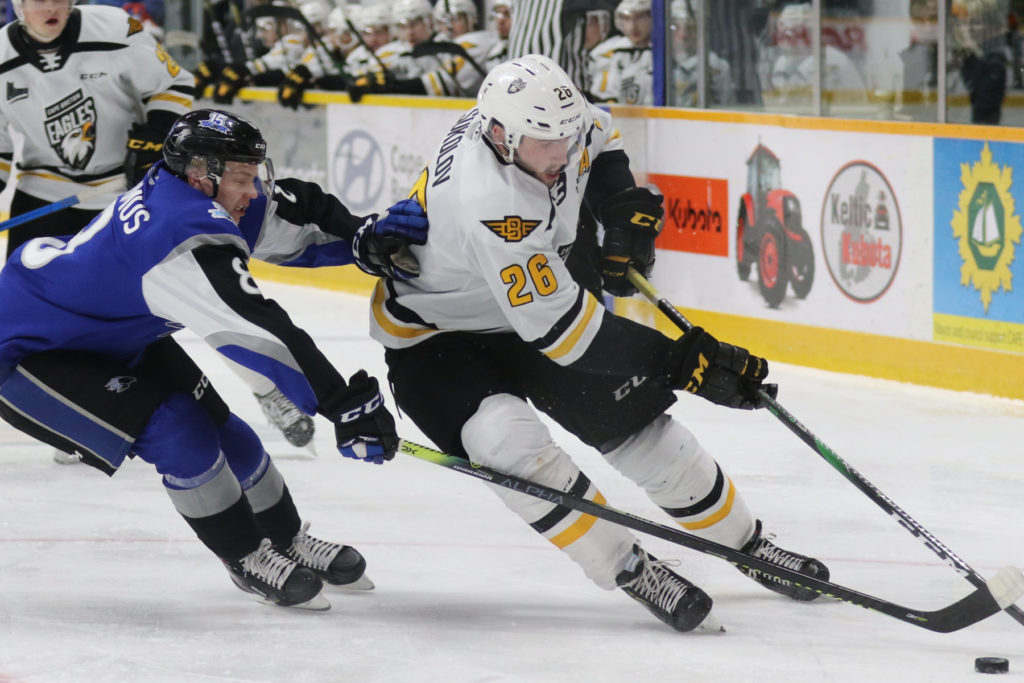 Four goal outbursts in the second and third period were the difference as the Cape Breton Eagles smashed the Saint John Sea Dogs 8-2 on Friday night in Sydney. With the victory the Eagles stretched a winning streak to seven games.

The Eagles offence was actually held off the board in the early going: the only goal of the opening period went to the visitors, as a William Villeneuve shot from the blueline bounced off Nicholas Deakin-Poot and by Kevin Mandolese.

Saint John’s lead lasted past the five minute mark in the middle period when Egor Sokolov blasted a low wrister past Zachary Bouthillier. The Sea Dogs looked to have an opportunity to take the lead when Matt Gould was on a breakaway, but Eagles defenseman Jeremy Langlois chased back to get the puck from him before he could take a shot.

The Eagles then took control of the game- Shawn Boudrias cashed in on a pass from Derek Gentile. Then, mere seconds after Anderson MacDonald (making his Sea Dogs debut) fanned on a nice deke, play went the other way and Gentile fed a one timer to Boudrias who finished to produce a two goal lead.

Julian Vander Voet got one back for the visitors with a shot off the right wing past Mandolese, but in the final three minutes Ivan Ivan buried a pass from Mathias Laferrière. That completed the scoring for the second period.

Saint John was unable to score on a power play that came late in the second period- amazingly, the first of the game after the first 38:37 was played at even strength. The Sea Dog discipline would fade in the third period as the Eagles drew power plays.

Sokolov found the back of the net for a second time to open the third period, as his shot bounced off of Saint John defenseman Charlie DesRoches and by Bouthillier. Then before the four minute mark Boudrias completed his hat trick on an odd man rush- Boudrias came up the right wing, passed to Gentile who found the big winger again for his third of the night.

Shawn Element, the third man on the line with Boudrias and Gentile, converted the touchdown to make it 7-2 and the final goal of the night came on a pinpoint top corner shot from Nathan Larose on the power play.

Gentile recorded five assists after being named the Eagles captain earlier in the afternoon. With it being a home game, Kyle Havlena, Egor Sokolov, and Jarrett Baker wore “A”s as alternate captains. The home alternates were announced this afternoon, in addition to announcing that Nathan Larose, Adam McCormick, and Shawn Boudrias will wear letters on the road.

Mandolese stopped 29 of 31 in the victory, while Bouthillier allowed eight goals on 48 shots in the loss.

The Eagles will now head to Moncton to take on the Maritime leading Wildcats on Sunday afternoon. You can hear all the action beginning with the pre-game show with Patrick McNeil at 3:30 PM on 1270 AM CJCB or online at www.cjcbradio.com

Final Shots On Goal: 48-31 in favour of Cape Breton