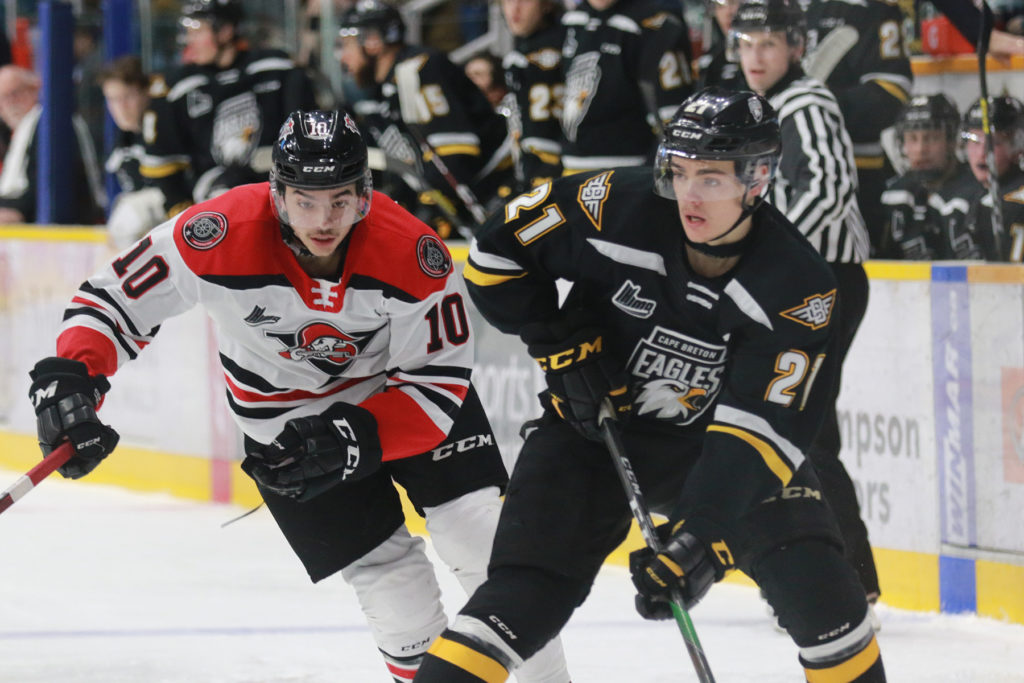 The Cape Breton Eagles snapped a three game losing streak in a big way with an 8-3 rout over the Drummondville Voltigeurs on Sunday afternoon- snapping a three game winning streak for the Volts.

It was the power play that would get the parade started for the Eagles in the opening period. Egor Sokolov started the scoring before the halfway mark as a centring pass on the power play bounced back to him and he put the puck by goaltender David Bowen.

The next goal would be crucial as the game unfolded. With under five minutes to play in the period, Brandon Skubel was given two minor penalties. Drummondville would not allow much in the way of scoring chances through four minutes of power play time- but with one second left in the man advantage and less than 40 seconds to go in the period, Nathan Larose received a pass at the top of the crease and put it by Bowen. The Eagles took a two goal lead and momentum to the break.

Period two would start with two Eagles goals again- but this time, at even strength. This time Drummondville would have its turn at a four minute power play as Shawn Boudrias took a double minor for high sticking in the opening minute. Cape Breton would not just kill the penalty, but Ivan Ivan was able to find Boudrias coming out of the box to beat Bowen on the breakaway.

What unfolded next was a a statistical anomaly for a November game- back to back first career goals. Connor Trenholm, the rookie Eagles forward, was denied on a big scoring chance looking for his first marker but fellow rookie linemate David Doucet was able to convert to put the Eagles up 4-0 with his first major junior goal.

Drummondville would get the goal back when freshman blueliner Noah Wilson ripped a shot through traffic by William Grimard for his first. However the Eagles restored the four goal margin as Derek Gentile put a shot over the shoulder of Bowen. It was 5-1 heading into the break.

In the first five minutes the Eagles further added to the lead- Sokolov with his second of the night, followed by Kyle Havlena who picked up a rebound after Félix Lafrance hit the post. Then it was Drummondville’s turn to score a pair- former Eagle Isiah Campbell stuffed one in on the power play in tight, and then Thomas Pelletier finished a pass from behind the net from Xavier Simoneau.

The Eagles now will head on their second Quebec road trip of the season, and it starts with a bang against the league leading Sherbrooke Phoenix on Thursday night. You can hear all the action beginning with the pre-game show with Patrick McNeil at 7:30 PM (Atlantic time)on 1270 AM CJCB or online at www.cjcbradio.com

Final Shots On Goal: 39-26 in favour of Cape Breton