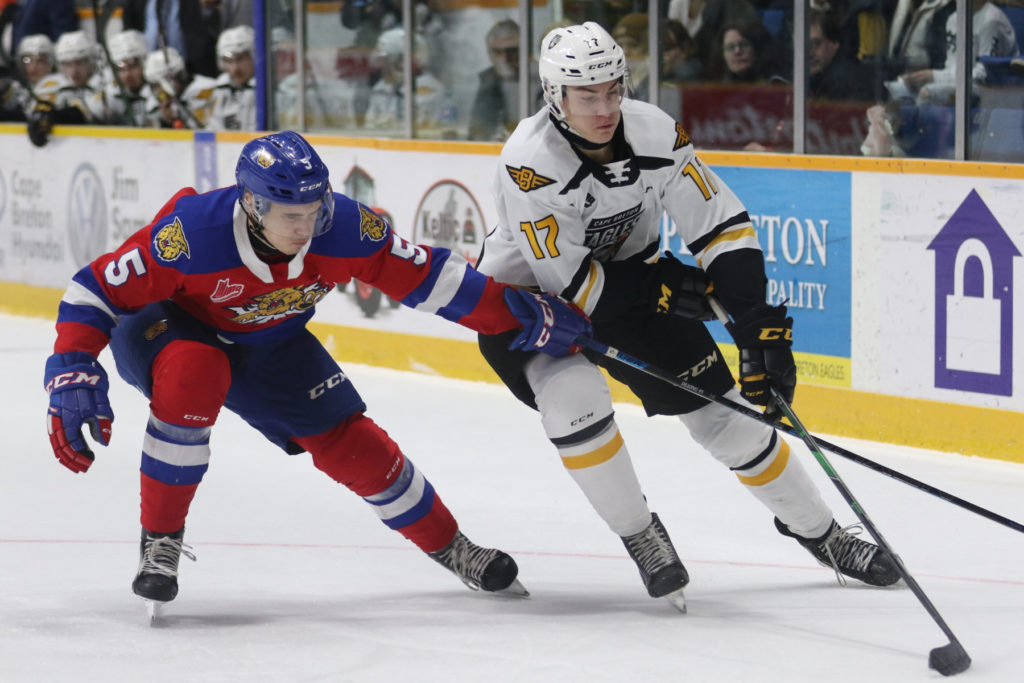 The Cape Breton Eagles took control early and shut down the Moncton Wildcats in a 5-0 win Saturday night at Centre 200. The victory pushed the Eagles win streak to five games and marked the end of a four game home stand.

After the seven minute mark it was Shaun Miller who began the scoring, converting a pass from behind the net from Liam Kidney. The second goal of the evening would be similar, with Adam McCormick ripping a shot off the end boards, Shawn Boudrias picking it up behind the net and feeding it out in front to Ryan Francis who slid it under Dakota Lund-Cornish to double the lead.

While Moncton gained control of the shot clock in the middle period, the result was the same: two Eagles goals. Félix Lafrance scored before the four minute mark on a tic-tac-toe play that started with Xavier Bouchard and finished with a pass from Derek Gentile. Less than three minutes later, Mathias Laferrière jabbed at the puck in a goal mouth scramble and pushed it over the goal line. It was 4-0 going into the third period.

Moncton did carry the play in the third, but couldn’t find a way to solve Mandolese and break the goose egg. After a sequence of Wildcats chances, the Eagles took the play the other way and Boudrias bounced the puck off and over Lund-Cornish to complete the scoring.

There were some fire works towards the game’s end when Derek Gentile took exception to hit a by Tristan DeJong on Liam Kidney. While the initial hit was not penalized, the skirmish in the aftermath resulted in Gentile and Bouchard, along with Moncton’s Jacob Stewart, all receiving ten minute misconducts.

While Mandolese picked up the shutout, Lund-Cornish allowed five goals on 25 shots. With William Grimard still out due to injury, Seth Crowe of the Kameron Jr. B Miners served as Mandolese’s backup netminder.

The Eagles will hit the road now for their first visit of the season to TD Station in Saint John to play the Sea Dogs. You can hear all the action beginning with the pre-game show with Patrick McNeil at 6:30 PM on 1270 AM CJCB or online at www.cjcbradio.com

Final Shots On Goal: 31-25 in favour of Moncton