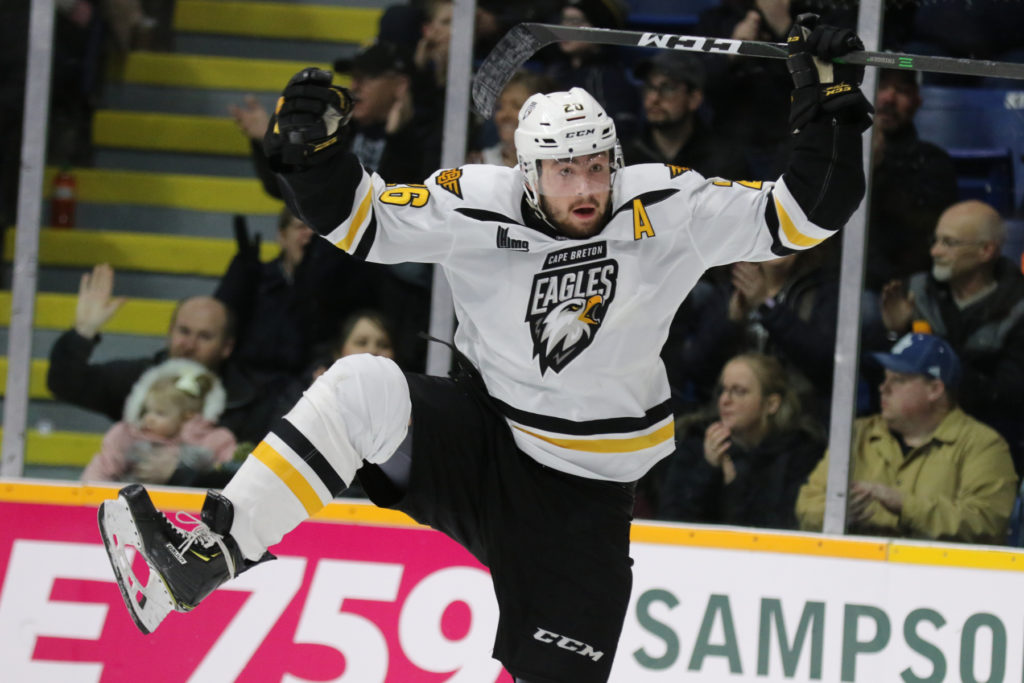 The Cape Breton Eagles delivered in front of a sellout crowd with a 4-2 victory over the Rimouski Océanic on Saturday night at Centre 200.

The Eagles got off to a fast start, with Egor Sokolov cashing in on a Shawn Boudrias rebound to give the home side a 1-0 lead. Sokolov’s line came through again past the halfway mark, as Mathias Laferrière put it through the legs of Colten Ellis to make it 2-0. Aside from the two Eagles goal, it was tough to create scoring chances on both sides, with Rimouski outshooting the Eagles 7-6.

Rimouski would hold the advantage on the shot clock again in the middle frame, outshooting the home club 11-5, but the Eagles were able to kill off both minor penalties in the second period and the keep the opposition scoreless. After holding the visitors at bay, in the final minute of the second period, Sokolov lit the lamp for the second goal of the evening to push the lead to 3-0.

With all the hype around the #1 pick to be in the NHL draft in 2020, Alexis Lafrenière, it was Rimouski’s fourth line that broke Kevin Mandolese’s shutout. Ludovic Soucy was given credit for the goal early in the third period in a choppy sequence. Former Eagle forward Olivier Bourret, playing his first game against the Eagles after three years with Cape Breton, didn’t get a point but was on the ice for the goal.

Lafrenière drew the ire of many of the Centre 200 fans- and a four minute penalty- getting a high sticking call against Xavier Bouchard to put the Eagles on the penalty kill. The Eagles penalty kill, having killed all three minors, were able to kill off the first half of the penalty but Justin Bergeron flipped a puck through the legs of Mandolese to cut the lead to 3-2 on the second half of the man advantage.

The Eagles finally received their first power play of the night in the second half of the period, but couldn’t capitalize with Nathan Ouellet in the box for interference. Still within a goal, Rimouski coach Serge Beausoleil elected to lift Ellis for an extra attacker with 68 seconds remaining.

Rimouski was pressing in the final minute and the puck was sent back to the blueline defenseman Walter Flower. The former Moosehead wound up but his stick exploded on the shot, and he wasn’t able to keep the puck in the zone without his twig. There was a race between Flower and Derek Gentile for the puck, with Flower having to grab a stick from the bench. With the head start Gentile won the race to the puck, and put it into the empty net to secure the win.

The Eagles were able to hold Lafrenière scoreless in the victory- the Rimouski captain would finish the night -3.

Mandolese picked up the win, stopping 33 of 35 shots. Ellis allowed three goals on 17 shots, in addition to the empty netter, in the loss.

The Eagles will now head out on the road for a pair of weekend games, beginning Friday night in Charlottetown. Puck drop is at 7:30 PM and you can hear all the action beginning with the pre-game show with Patrick McNeil at 7 PM on 1270 AM CJCB or online at www.cjcbradio.com

Final Shots On Goal: 35-18 in favour of Rimouski