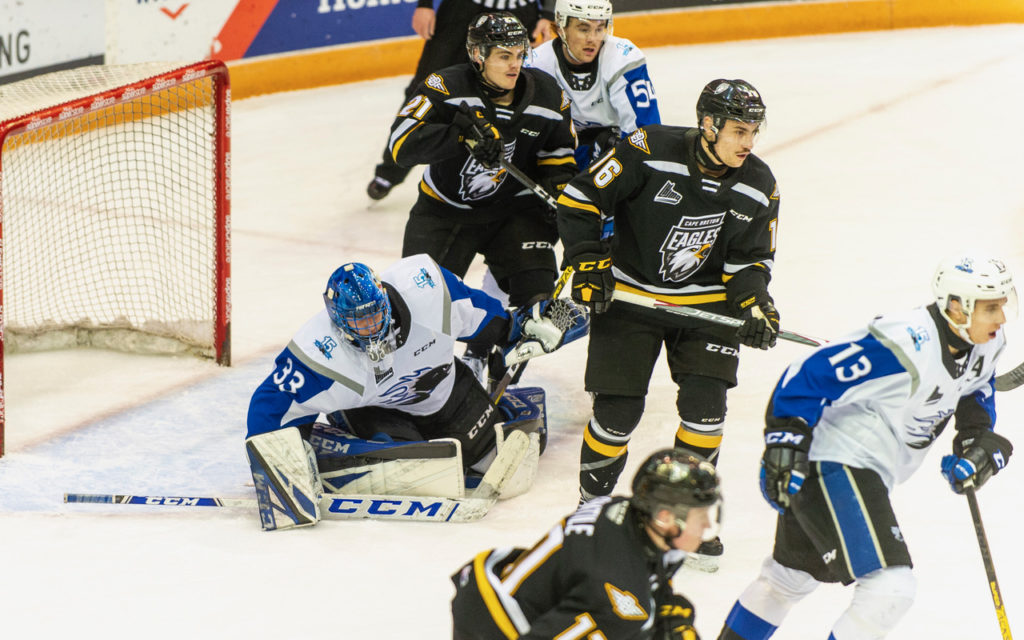 The Cape Breton Eagles stretched a winning streak to six games with a 7-2 victory in Saint John on Wednesday night. It was the first road game of the season for the Eagles in 2020.

The Eagles wasted little time opening the scoring, doing so in the first three minutes. After Saint John’s Maxim Cajkovic was inadvertently hit by a puck, Ivan Ivan solved Zach Bouthillier. It looked like it could be a long night for both goalies as Josh Lawrence quickly countered with a goal of his own, beating Kevin Mandolese after he was found alone in front of the Eagles net.

But the rest of the period belonged to the Eagles. Adam McCormick gave the visitors a lead that wouldn’t relinquish when he put a shot just over the shoulder of Bouthillier. The rest of the period was all Egor Sokolov in his first game since coming back from World Juniors.

First Sokolov would use Ryan Francis as a decoy on a 2 on 1, putting the puck through Bouthillier’s legs to make it a 3-1 game. For an encore in the opening frame, he dangled the puck from all the way over the centre line and into the Saint John net for his second of the night, marking the end of the night for Saint John’s goaltender.

It was 4-1 to begin the second period, but the Eagles didn’t take long getting to goaltender Noah Patenaude as Nathan Larose scored before the three minute mark. Before period’s end Sokolov finished his hat trick on a nice passing play from Ryan Francis and the Eagles led 6-1 heading into the final stanza.

With the game’s fate seemingly decided, both teams would add one to the tally in the third period. Dawson Stairs stuffed one in on the side on Mandolese, then Shawn Element would finish a wrap around pass from Derek Gentile to make it 7-2 in favour of the Eagles and finish scoring for the night.

The game marked the Eagles debut of forward Tyler Hinam, acquired in a trade from Rouyn-Noranda. He had an assist, was +2, and registered five hits.

Bouthillier took the loss, allowing four goals on nine shots. Patenaude stopped 23 of 26 in relief, while Mandolese picked up the win stopping 23 of 25.

The same two teams will do battle Friday night at Centre 200. Puck drop is at 7 PM, and tickets can be purchased at the Centre 200 box office, by phone at 902-564-2200 or online at https://tickets.capebreton.ca/Online/default.asp

Final Shots On Goal: 35-25 in favour of Cape Breton