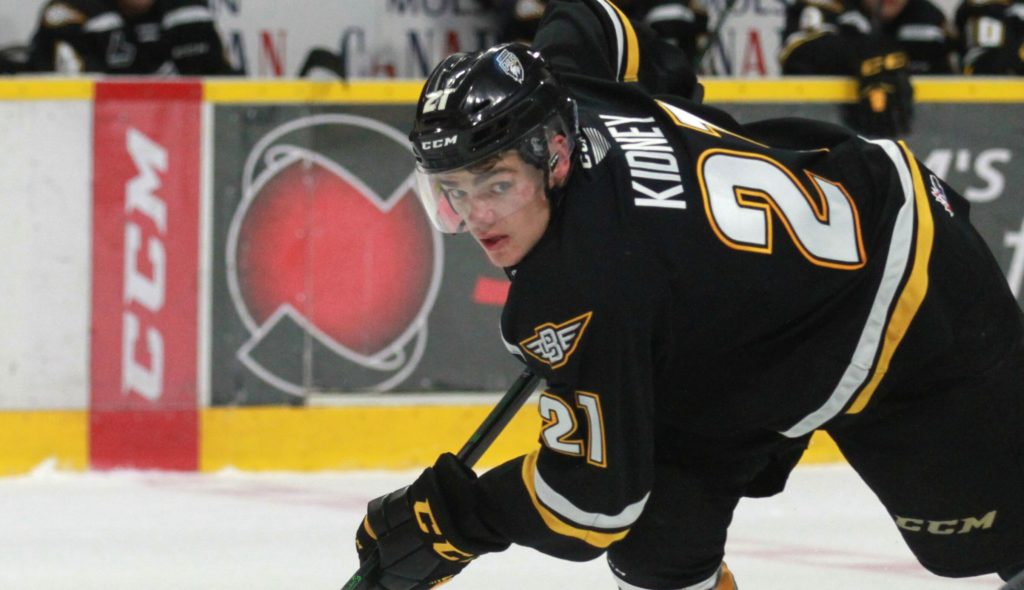 The Cape Breton Eagles put on a dominant offensive display in a 8-2 thrashing over the Charlottetown Islanders in PEI on Saturday. The Eagles swept a two game set with the Isles, having won Friday night 5-2.

It started with a short handed marker in the game’s first four minutes- some nifty stickhandling led Shawn Element to score his second short handed goal in as many nights to open the scoring. Then it was the Eagles power play that would go to work, as Mathias Laferrière made a nice backhand deke to move the puck to Ryan Francis for a one timer goal.

Special teams became even more of a story in the opening period with a sequence of penalties. Charlottetown’s Max-Antoine Melançon was given a five minute major and a game misconduct for a hit to the head on Nathan Larose. (Larose would not appear on the power play but was back for the second period). The Eagles thought two minutes of their power play was gone when Tyler Hinam was sent off, but soon after Charlottetown’s Noah Laaouan found himself in the box.

Playing with a 4 on 3 advantage, Egor Sokolov blasted a heavy shot over Matthew Welsh to make it 3-0. The Eagles then received some bonus power play time, as when the five minute major came to an end there was no one in the box serving the penalty for Charlottetown. The Eagles didn’t take advantage of the extra “power play” time but did leave the period leading 3-0.

The teams traded goals in period two. Liam Kidney pushed the lead to 4-0 when he jabbed a puck over the line in a scramble in the opening minutes. William Trudeau broke the shutout with a shot through Kevin Mandolese’s legs, but 41 seconds later Félix Lafrance put the puck by Welsh to spell the end of the night for Charlottetown netminder. The second period scoring concluded when Justin Gill converted a cross-crease pass from Drew Elliot to make it 5-2.

Jacob Goobie replaced Welsh and was unable to hold the Eagles off the scoresheet as Derek Gentile flipped a sharp angle shot off and over the goaltender early in the third period. After the halfway mark of the period Jarrett Baker ripped a shot along the ice to push the score to 7-2.

Fireworks would come in the later stages of the period. After Connor Trenholm took a penalty, Charlottetown’s Thomas Casey came flying in to charge at the Eagles forward, earning a five minute major and a game misconduct. Three players from each team picked up penalties, with Trudeau and Cape Breton’s Cole Fraser also getting misconducts. The Eagles ended up on the power play as a result and Liam Kidney concluded the scoring with a goal on the man advantage.

Mandolese turned aside 34 in 36 in the win, while Welsh took the loss allowing five goals on 15 shots. Goobie stopped 15 of 18 shots in relief.

The Eagles will now return home to take on the Blainville-Boisbriand Armada on Thursday night- the only appearance the Armada will make this season. Puck drop is at 7 PM and tickets can be purchased at the Centre 200 box office, by phone at 902-564-2200 or online at https://tickets.capebreton.ca/Online/default.asp

Final Shots On Goal: 36-34 in favour of Charlottetown