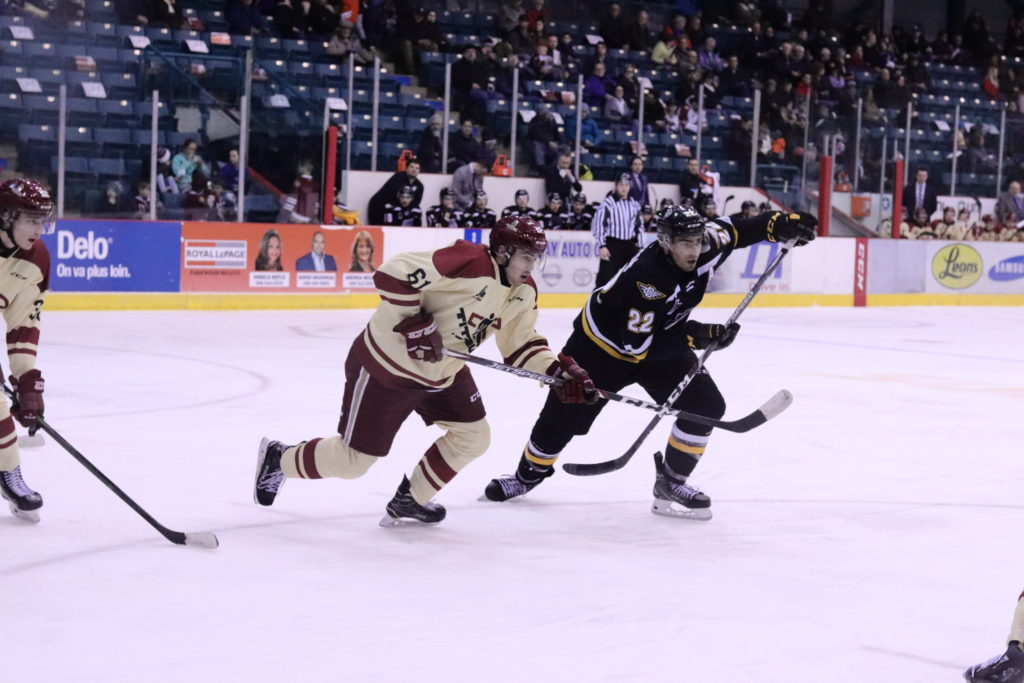 The Cape Breton Eagles finished a two win weekend with authority after a 7-1 rout in Bathurst on Sunday afternoon.

Bathurst outshot the Eagles in the opening 20 minutes, but it was the visitors getting the higher quality chances and the jump on the scoreboard. In the opening moments of the game Félix Lafrance was taken down behind the play but it didn’t stop Derek Gentile from getting a breakaway, zooming in and beating Félix-Anthony Ethier. Before the period ended the lead would double, as Shawn Boudrias raced up the right wing and flipped a cross-ice pass to Egor Sokolov to make it a 2-0 score. William Grimard helped hold the lead with a tremendous stop on Logan Chisholm on a 2 on 1 before the first horn sounded.

Just as was the case in the opening period, the Eagles scored a pair of goals. Matthew Gordon converted a pass from Logan Camp for the first goal of his QMJHL career to make it 3-0. Before period’s end, Nathan Larose sprung Ryan Francis with a tremendous pass and it was a 4-0 game with six minutes to go in the middle stanza.

After a scoreless first half of the final frame, the offensive onslaught would continue, first with Derek Gentile’s second of the night and then a goal to make it 6-0 by Shawn Boudrias.

Noah Delemont snapped Grimard’s shutout in the third period with a point shot through traffic, but the Eagles would get one back in the final six minutes when Nathan Larose scored the final goal of the evening to make it a 7-1 final.

With the victory, the Eagles ensured they will finish no lower than fourth in the QMJHL’s Eastern Conference and will have home ice advantage in the opening round of the playoffs.

Grimard turned aside 33 of 34 shots in the win, while Ethier. allowed seven goals on 32 shots in taking the loss.

The Eagles will be back on the road on Wednesday night take on the Maritime Division leading Moncton Wildcats. Puck drop is at 7 PM and you can hear all the action beginning with the pre-game show with Patrick McNeil at 6:30 PM on 1270 AM CJCB or online at www.cjcbradio.com