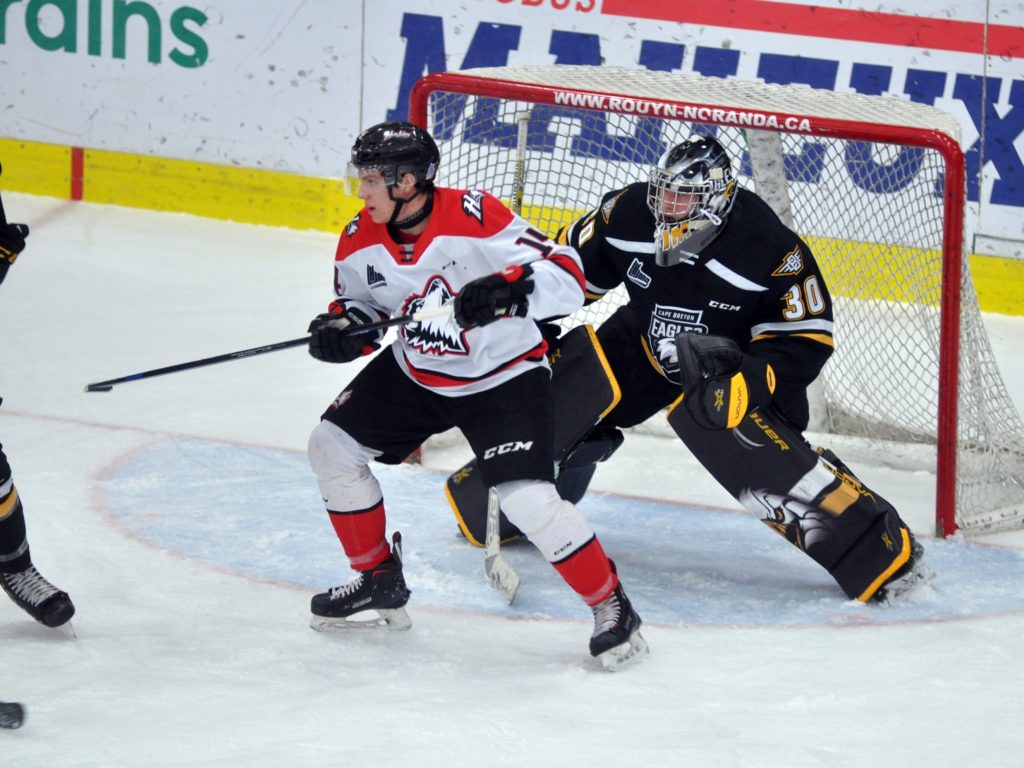 A third period rally fell short for the Cape Breton Eagles in a 3-2 loss to Rouyn-Noranda on Thursday night.

Goals were hard to come by in the opening 39 minutes as both Cape Breton’s William Grimard and Rouyn-Noranda’s Samuel Richard delivered strong performances. The only goal in the opening period came when penalty trouble caught up to the Eagles- Charles-Edouard Drouin scored on the third Huskies power play of the period. Drouin was all alone in front of the net and put the puck over Grimard to give the Huskies the lead at the rink.

There were no goals at all in the middle period until the final 23 seconds, which would change the complexion of the game. Alex Beaucage hammered a one timer on a pass from Drouin, putting the puck just inside the post. 16 seconds later, Olivier-Luc Haché sent a cross-ice pass deep in the Eagles zone that Mathieu Gagnon would finish. The Huskies carried a 3-0 lead into period three.

The Eagles fought back in the final period. Mathias Laferrière and Shawn Boudrias worked magic on a 2 on 1, making three passes finishing with a Laferrière goal to put the visitors on the board. The press continued at 13:25 when Shawn Boudrias converted a pass from behind the net from Félix Lafrance to cut the lead to 3-2.

With just over two minutes to play, Jake Grimes would elect to lift Grimard for an extra attacker. While the Eagles would get their chances- including a potential buzzer beating shot by Shawn Element- the comeback was not to be and the Huskies skated away with a 3-2 win.

Eagles captain Derek Gentile left the game in the first period and didn’t return to the game. His status is unknown for the rest of the road trip.

The Eagles will finish the season long road trip on Saturday night in Gatineau when they take on the Olympiques. Puck drop is at 8 PM. You can hear all the action beginning with the pre-game show with Patrick McNeil at 7:30 PM on 1270 AM CJCB or online at www.cjcbradio.com

Final Shots On Goal: 40-27 in favour of Rouyn-Noranda