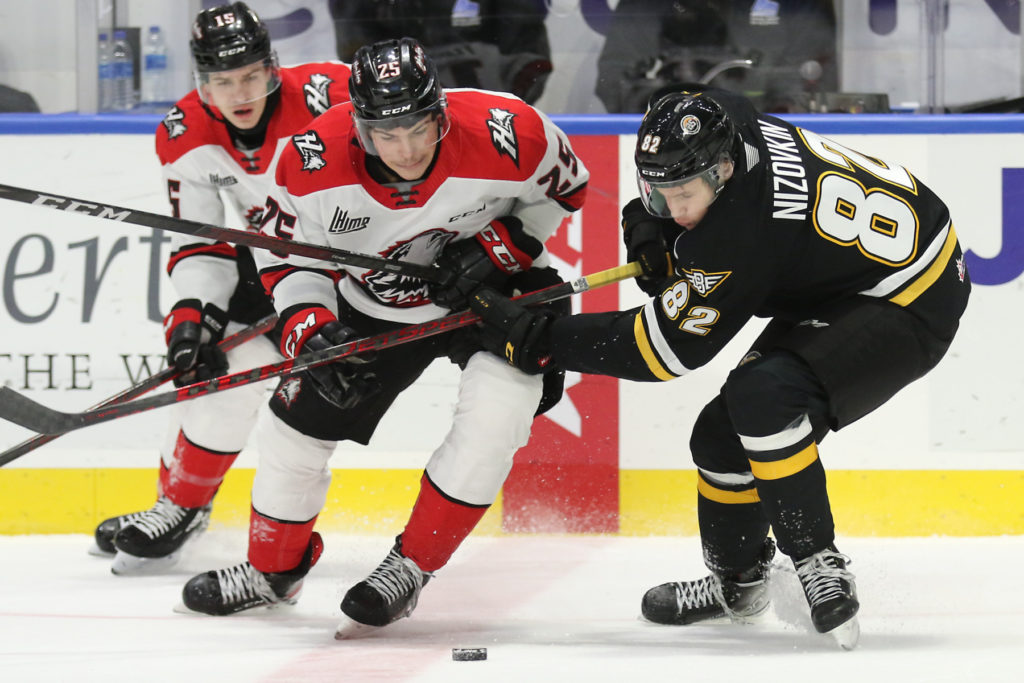 A good start and a frantic rally wasn’t enough to carry the Eagles to victory in a 6-4 loss to the Rouyn-Noranda Huskies on Sunday afternoon in Sydney.

The Eagles had the opening they were looking for, striking before the five minute mark: Jack Campbell flipped a diagonal pass to Jérémy Langlois at the blueline, and his shot was tipped by Logan Camp past Samuel Richard to give the home team a 1-0 lead.  The Huskies countered less than three minutes later when an Emeric Gaudet power play shot was twice tipped- first by Samuel Johnson and then Alex Arsenault, and it was 1-1.

Just after the halfway mark of the opening period, the Eagles reclaimed the lead when Dawson Stairs fed a cross-ice backhand pass to Ivan Ivan who put the Eagles in front 2-1.  However, the Huskies tied the game with seven seconds to play in the opening frame.  Mathieu Gagnon won the draw to Johnson who found Daniil Bourash at the side of the net and he tied the game before the horn.

Period two belonged to the visitors.  The power play came through again when Gagnon jabbed a loose puck over the line in blue paint.  With just over five to play in the second stanza, Gagnon scored from the same spot, this time through the legs of Nicolas Ruccia.  Then, prior to period’s end, Bourash lifted it over the shoulder of the Eagles keeper to make it 5-2 at the second intermission.

Rémi Delafontaine came in in relief of Ruccia to start the third period, but neither he or Richard would face many tough shots in the early part of the frame.  The action picked up in the second half of the third period though, as the Eagles attempted to charge back into the contest.

It began when Luke Patterson, making his QMJHL debut for the Eagles, drew a penalty on Thomas Belzile.  The Eagles cashed in just 15 seconds into the man advantage when Cam Squires deked around Richard.  Moments later at even strength, Squires was denied by a Richard on a breakaway.

With almost three full minutes remaining Eagles coach Jake Grimes lifted Delafontaine for an extra attacker.  Persistance paid off when, with 59 seconds to go, Stairs beat Richard to pull the Eagles within a goal.  Delafontaine went back into the net, and was quickly back out of the net as the Eagles pushed hard for the tying goal.

It was not to be and when the Huskies cleared the zone, Gagnon completed his hat trick into the open goal with nine seconds left to seal a 6-4 win.

Richard picked up the win, stopping 31 of 35 shots.  Ruccia took the loss, allowing five goals on 20 shots, while Delafontaine stopped all seven shots in relief in addition to the empty netter.

Patterson registered one hit and won six of 14 faceoffs in his QMJHL debut.  Preston Pattengale, who debuted for the Eagles on Friday, remained with the club on Sunday and recorded one shot on goal.

The Eagles will now hit the road for a pair of games in Bathurst beginning with Thursday’s night game. Puck is at 7 PM. The game is available for purchase online at https://watch.chl.ca. You can also hear all the action beginning with the pre-game show with Patrick McNeil at 6:30 PM on 1270 AM CJCB or online at www.cjcbradio.com

Final Shots On Goal: 35-28 in favour of Cape Breton