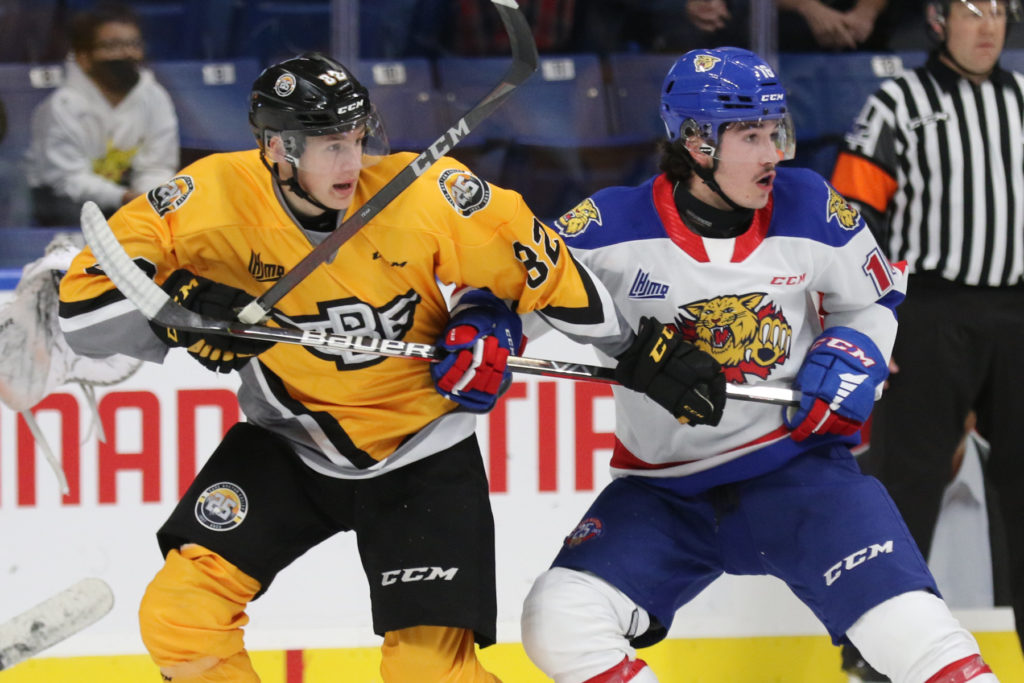 The Cape Breton Eagles rallied but were unable to complete the comeback in a 4-2 loss to the Moncton Wildcats Sunday afternoon.

The Eagles carried the play in the early portion of the game, including a power play in the opening minute when Anthony Hamel was sent off for tripping. But it was the Wildcats who scored first when Ethan Dollemont snapped a shot by Rémi Delafontaine.

Moncton thought they had their own power play to build on the lead late in the period when Conor Shortall was sent to the box, but a video review determined that his stick didn’t make contact with Thomas Auger. The rest of the period was played even strength and the period finished 1-0 for Moncton.

Moncton’s lead did double in the second period though after the five minute mark, as Vincent Labelle sped through the netural zone and finished a feed from Francis Langlois to beat Delafontaine. And at 13:53 of the middle stanza, Yoan Loshing scored a power play goal for the second straight game to give the visitors a 3-0 edge.

A late power play gave the Eagles a chance to get back in the game. Moncton did kill of the minor but as the penalty ticked down, Connor Trenholm sped up the left wing, flipped the puck into traffic on a sharp angle and the deflection beat Thomas Couture to get the Eagles on the board. Moncton led 3-1 going into the third period.

The scoreline got tighter after the eight minute mark of the the third period when Jérémy Langlois ripped a shot through traffic and pulled the Eagles within one. Despite a number of quality scoring chances on Couture, the Eagles could get no closer and the task became more difficult after an Alexis Daniel backhand shot found its way by Delafontaine to make it a 4-2 scoreline.

With just over three minutes to play, Eagles coach Jake Grimes lifted Delafontaine for the extra attacker. While the Eagles would keep the puck in Moncton’s end for most of the balance of the game, there would be no more scoring and the Wildcats skated away with a 4-2 victory.

Couture picked up the win, stopping 32 of 34 shots, while Delafontaine allowed four goals on 21 shots.

The Eagles will be right back in action tomorrow afternoon as they host the Acadie-Bathurst Titan in a special Thanksgiving matinee. It’s the first appearance at Centre 200 by the Titan in 2021. Puck drop is 2PM and tickets can be purchased at https://www.ticketmaster.ca/cape-breton-eagles-tickets/artist/891825. They are also available for purchase in person at the Centre 200 box office and by the phone during box office hours at 902-564-2200

Final Shots On Goal: 34-21 in favour of Cape Breton