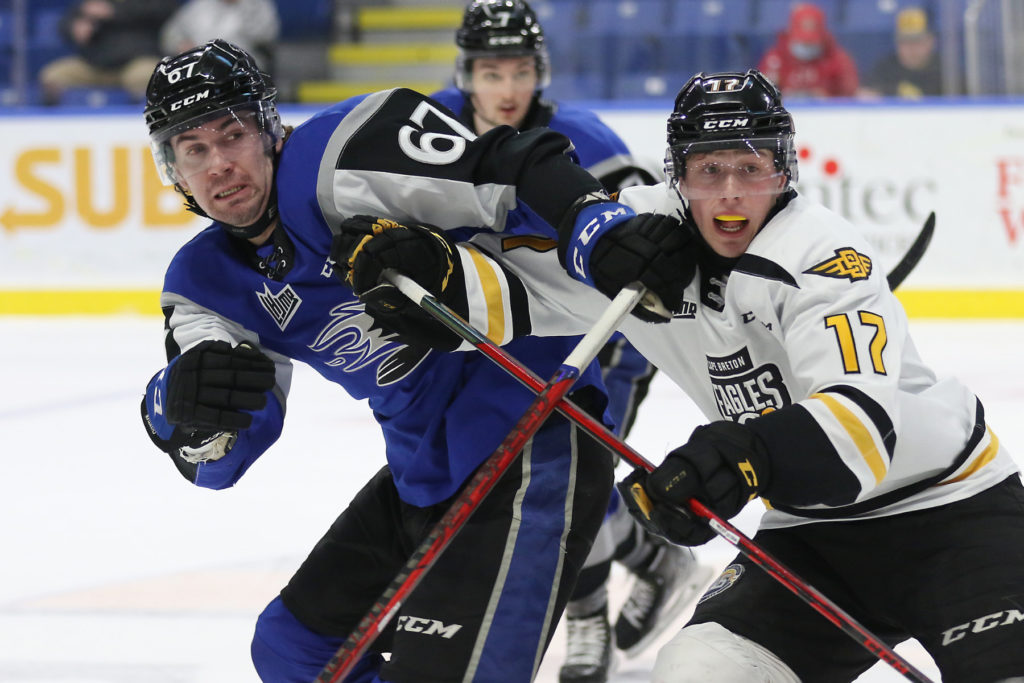 The Cape Breton Eagles will finish their road schedule for the 2021-22 season tonight as they play the back end of a two game set against the Saint John Sea Dogs.

Saint John struck first in the series with a 4-1 victory on Thursday night in a game that got off to an evenly paced start.  Saint John took a 1-0 lead into the dressing room after the opening period, outshooting the Eagles 13-12.   The difference in the game was a six minute stretch in the second period where the Sea Dogs broke things open with three goals, beginning with a goal scored on 5 on 3.  Brady Burns came through with a big night, scoring a pair of goals in the middle stanza.

Former Sea Dog Carter McCluskey was the lone marksmen for the Eagles.  This week the Eagles have received top notch goaltending against their top Maritime foes, as Rémi Delafontaine stopped 42 of 46 shots against Charlottetown on Tuesday while on Thursday night Nicolas Ruccia stopped 40 of 44 against Saint John.

With last night’s result the Sea Dogs extended their QMJHL season long winning streak to 13 games.  Tonight will be the final home game of the year for Saint John, who is certain to finish the season in third place in the Eastern Conference- facing either Rimouski or Halifax in the first round.

Tonight will be the final road game for Eagles 20 year old forwards Nicholas Girouard and Émile Hegarty-Aubin.  Girouard played his 19 year old campaign with Saint John, notching 26 points in 31 games while this year he has collected 38 points in 46 contests for the Eagles.  Thursday night marked the end of a four game point streak for Hegarty-Aubin and a five game point streak for defenseman Romain Rodzinski.

Tonight’s game will be broadcast on Eastlink Television, and also is available for purchase online at https://watch.chl.ca. You can also hear all the action beginning with the pre-game show with Patrick McNeil at 6:30 PM on 1270 AM CJCB or online at www.cjcbradio.com