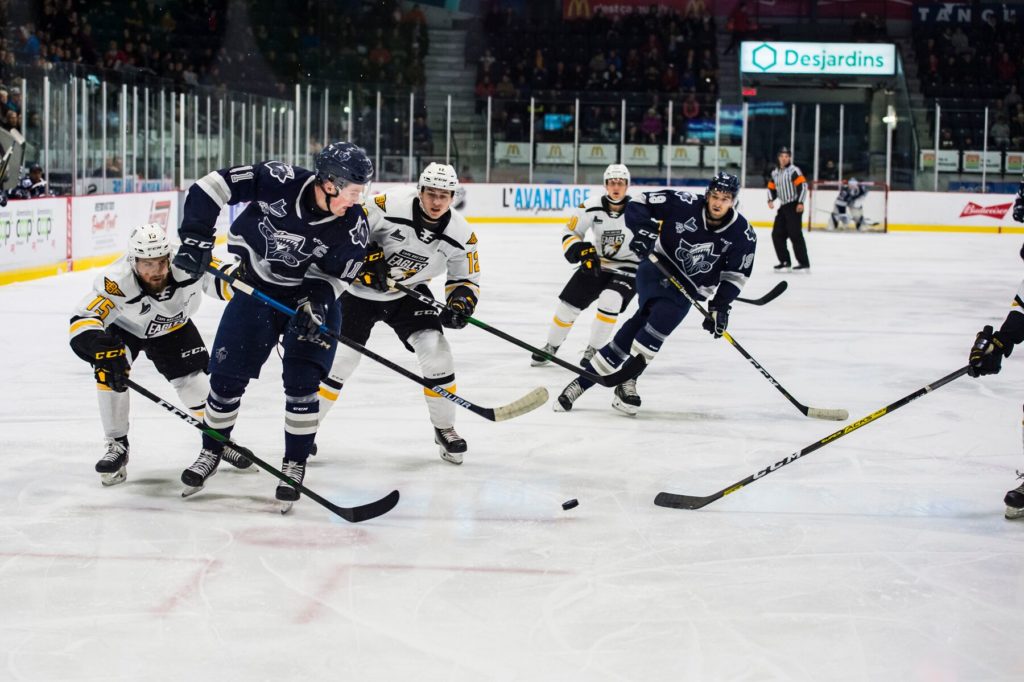 The Cape Breton Eagles perfect start to the season came to a halt in a 9-2 loss to the Rimouski Océanic on Wednesday.

The home team came out of the gate quickly, as Cole Cormier scored on a rebound after a wraparound just 29 seconds in. The Océanic recorded the first eight shots of the game.

However the Eagles would show some pushback, generating the bulk of chances in the next sequence. The pressure would pay off when Félix Lafrance scored on a power play to tie the game at 1. Unfortunately for the Eagles they could not escape the period tied as Dmitry Zavgorodniy gave Rimouski a 2-1 edge before the first buzzer.

It was a slow start to the middle stanza that would cause the most damage to the Eagles. In the opening minute Cédric Paré finished a one timer on a feed from Alexis Lafrenière to push the lead to 3-1. Less than 30 seconds later Adam Raska found himself in front of the net and lifted it over William Grimard to add the Rimouski edge. And then prior to the five minute mark Isaac Belliveau ripped a shot through a Jeffrey Durocher screen on the power play for his first QMJHL goal, and a 5-1 lead for Rimouski.

Cape Breton had a chance to get back into the game when back to back hooking calls against Rimouski gave the Eagles a 64 second 5 on 3 advantage. However the Océanic penalty kill would stand tall, killing off both minors. The kill did come with an interruption though: following an Adam McCormick shot from the top of the left circle, the glass behind the Rimouski goal shattered and required replacing, causing a lengthy delay as both teams went back to their dressing rooms.

Before period’s end the teams would trade goals- Zavgorodniy netting his second of the night on a power play feed from Lafrenière. The Eagle struck next as in the final minute of the frame Egor Sokolov blasted a high shot over Colten Ellis.

Just like earlier in the night, Rimouski would get goals not long apart- before the halfway mark Paré muscled his way to the front of the goal for his second of the night, and then 15 seconds later Lafrenière slipped a backhand Grimard to make it an 8-2 game. Ludovic Soucy would conclude the night’s scoring with a short handed goal.

Ellis picked up the win, stopping 30 of 32 shots. Grimard took the loss, allowing nine of 54 shots.

The Eagles will now continue the road trip on Friday night with a visit to Baie-Comeau to take on the Drakkar. You can hear all the action beginning with the pre-game show with Patrick McNeil at 8 PM on 1270 AM CJCB or online at www.cjcbradio.com

Final Shots On Goal: 54-32 in favour of Rimouski