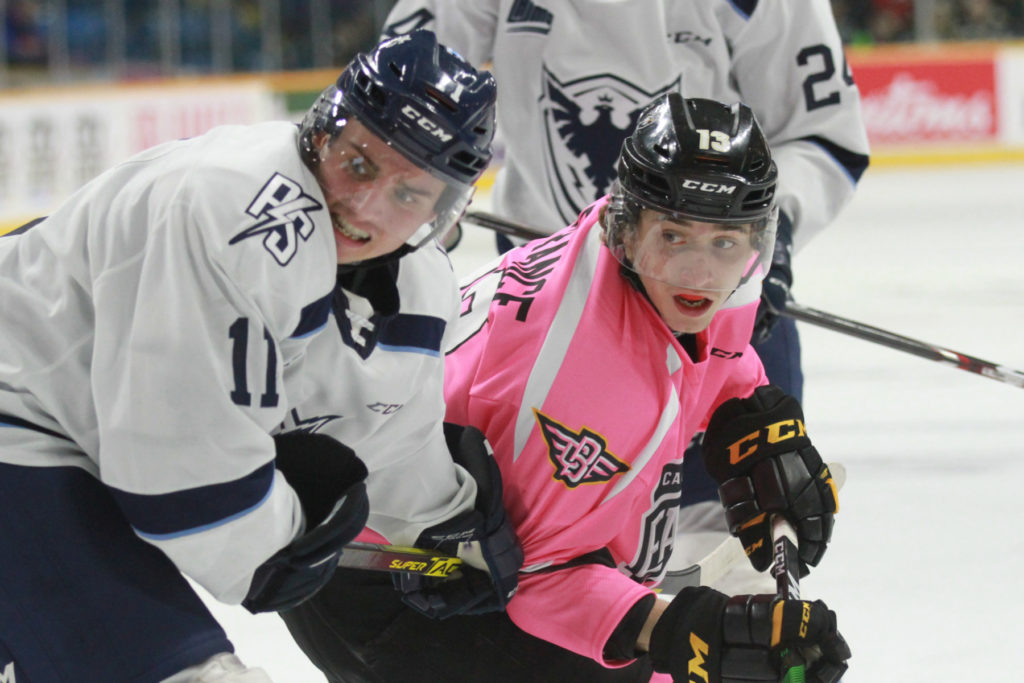 The Cape Breton Eagles are ready to begin a three game, three day road swing through the province of Québec against the toughest opponent: the league leading Sherbrooke Phoenix.

Sherbrooke is red hot coming into tonight’s game, with a record of 17-1-2. They are 13-0-1 in their last 14 contests and this season they are a perfect 10-0 at home. They were tested during the one meeting against Cape Breton this season, eking out a 3-2 victory on a late game winning goal back on October 26th in Sydney. Tonight is the second and final time the two sides will play during the regular season.

The Eagles are coming off an impressive performance of their own, an 8-3 victory over Drummondville. Seven different players scored in the victory (including David Doucet’s first career goal) and 14 different players notched points.

Tonight’s game is a battle between the league’s two highest scoring teams: Sherbooke has scored 94 goals, Cape Breton 92. (The Phoenix also have the least goals against with 46.). For the Sherbrooke a big key to the offence has been an eye popping power play (36.6% efficiency) and an electrifying top line.

Alex-Olivier Voyer, Samuel Poulin, and Félix Robert are all in the top ten in league scoring, and all are in the top five of shots on goal. Robert is on the longest current point streak in the league at 16 games (no other player is on a streak longer than ten games) while Voyer has five game winning goals (no other player in the league has four.) There isn’t a shortage of secondary scoring either, as Benjamin Tardif (11 points in 7 games) has returned to the lineup after not playing in the first game between the Eagles and Phoenix.

Curiously, the league leading Phoenix are also the league’s most penalized team. The Eagles will look to capitalize and may continue to use a to the formation of five forwards on the top power play unit, which has gone 3/9 over the last two games with that alignment.

The Eagles continue to be without goaltender Kevin Mandolese who will not be on the trip with the team. Defenseman Adam McCormick is also out of the lineup, while Jérémy Langlois has returned to the Eagle blueline after the World Under 17s.

Puck drop for tonight’s game is at 8:00 PM, and you can catch all the action beginning with the pre-game show at 7:30 (Atlantic time) with Patrick McNeil on 1270 CJCB (or online at cjcbradio.com). Go Eagles Go!