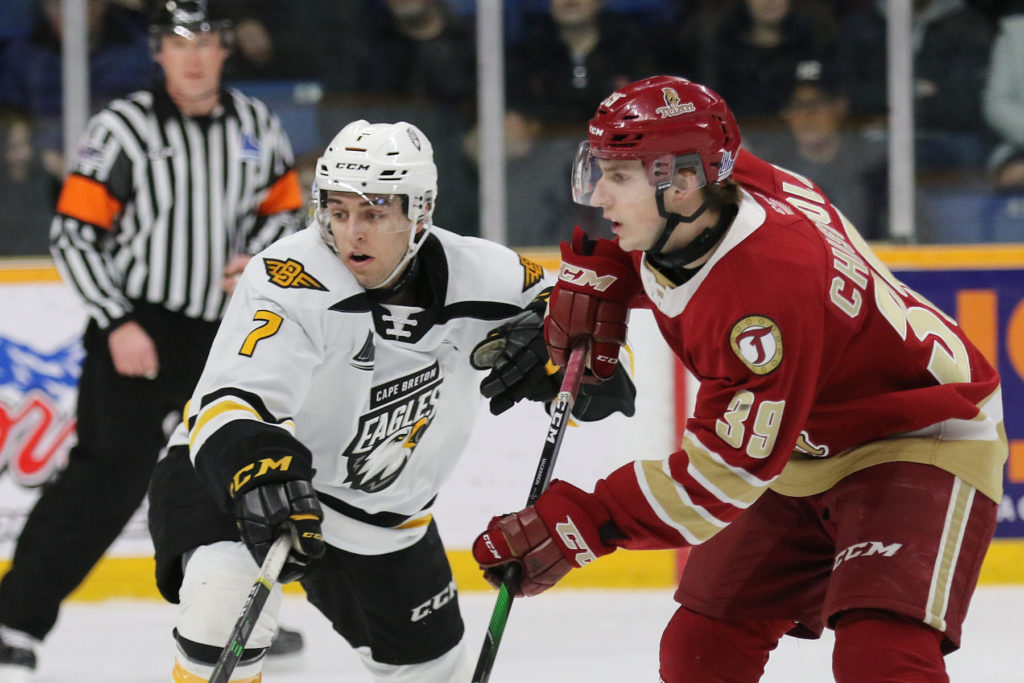 As the QMJHL playoffs quickly approach, the Cape Breton Eagles will finish up a season series with a long time Maritime Division rival this afternoon.

It’s the eighth and final meeting of the regular season between the Eagles and Titan, and Bathurst will be the first divisional foe the Eagles finish playing in the 2019-20 campaign. Heading into tonight’s game the Eagles hold a 5-2 edge in the season series, with one of the wins coming in a shootout. It’s the first visit of the Eagles to Bathurst in the year 2020, and this season the Eagles have won two of three meetings in New Brunswick.

The Eagles have the opportunity to do two significant things in the QMJHL standings this afternoon. With a point they can officially clinch home ice advantage for the first round of the 2020 playoffs. Also, trailing Rimouski by one point heading into today, they could tie or pas the Océanic for third place in the Eastern Conference depending on today’s results. (Rimouski visits Shawinigan at 5 PM Atlantic time). Heading into this afternoon’s contest the Eagles hold a record of 39-19-3 (16-12-2 away from Centre 200).

In Bathurst the rebuild continues as the Titan were officially eliminated from post-season contention with a 6-5 overtime loss to Drumondville on Friday night. It’s the second straight season the Titan will miss the playoffs following their Memorial Cup victory in 2018. However, there are positive signs going forward for a Bathurst club who hasn’t made it easy on opposition: excluding Baie-Comeau and Gatineau, no team in the league has played in more one goal games. Bathurst also has more extra time losses than any other team in the QMJHL this season.

As part of the rebuild, Bathurst parted ways with captain Shawn Element, sending him to Cape Breton over the holidays. Today will be Element’s last game at the rink he called home for half a season and he’ll come in with plenty of momentum, having recorded a hat trick in the Eagles’ 5-1 win in Halifax last night. His current captain, 20 year old Eagle Derek Gentile, also had a fine showing last night with four assists against the Mooseheads.

Today will mark the final time the Eagles see the three Titan 20 year olds who will conclude their major junior careers later this month. Goaltender Tristan Bérubé has posted a 4-4 record against the Eagles in his junior career, in addition to a 3-2 mark in the playoffs when he was with Gatineau in 2017. Defenseman Yan Aucoin is the lone five year player of the trio, finishing up a career that saw him spend four years in Baie-Comeau (including three being teammates with Element and Eagles defenseman Xavier Bouchard).

While Aucoin and Bérubé were acquired in the off-season, Rémy Anglehart arrived in Bathurst during the season after being caught in the numbers game in Drummondville. The 20 year old has been productive with 41 points in 46 games since arriving in Bathurst. In recent games he’s received support from Mathieu Desgagnés- the 19 year old who has 16 points in nine games, including a two goal game at Centre 200 during that stretch.

Puck drop for tonight’s game is at 3:00 PM, and you can catch all the action beginning with the pre-game show at 2:30 with Patrick McNeil on 1270 CJCB (or online at cjcbradio.com). Go Eagles Go!