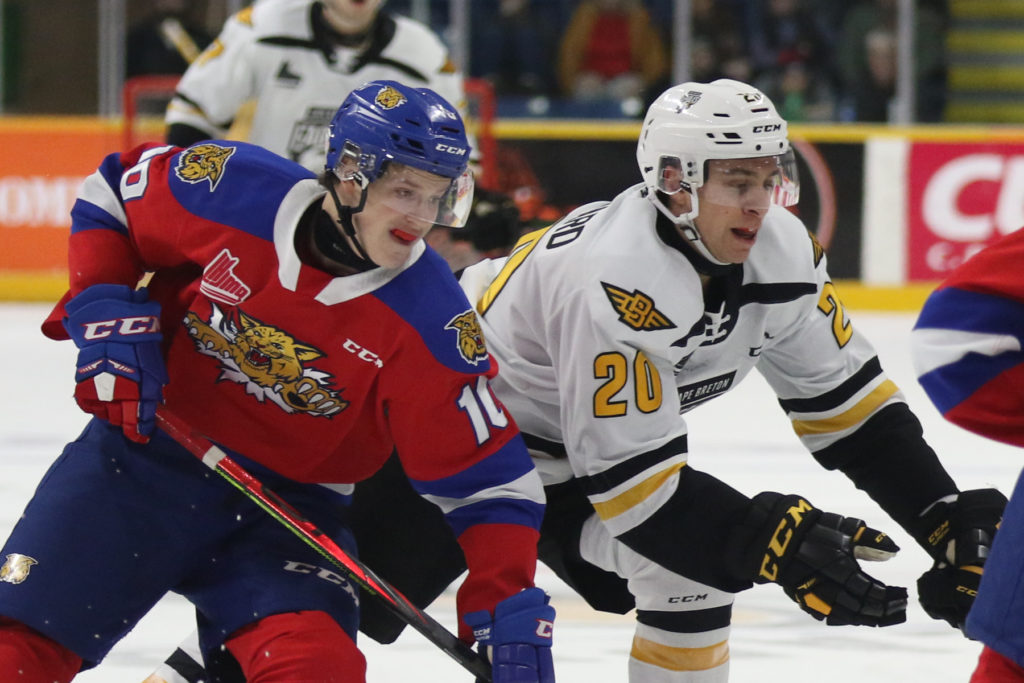 The top two teams in the QMJHL’s Maritime Division will do battle tonight in Moncton as the Cape Breton Eagles make their final visit of the 2019-20 regular season to New Brunswick’s Hub City.

Coming into tonight’s game, the Eagles are in fourth place in the Eastern Conference with a record of 40-19-3 (17-12-3 on the road) while Moncton holds the top spot at 49-19-1 (27-4-0 at home). Moncton has clinched the top spot in the Maritimes, with the Eagles unable to catch them, but Moncton is still working on clinching first overall over Chicoutmi. Cape Breton can move up though, and can do so tonight- the Eagles are just one point back of Rimouski for third place and will play one of their two games in hand tonight. This season Moncton has won five of eight meetings, with each team holding an overtime win, and Moncton winning all four games at the Avenir Centre (one in overtime).

The Eagles come into tonight’s game on a three game winning streak, having allowed just one goal in each of the three wins over Quebec, Halifax, and Bathurst. Eagle captain Derek Gentile has been helping to lead the charge in recent outings, with twelve points in his last eight games.

Both teams possess a Russian from this past winter’s World Junior team chasing a milestone. Cape Breton’s Egor Sokolov leads the league with 46 goals, and is scoring at a pace that would put him over the 50 goal mark. (The last Eagle to achieve it was Giovanni Fiore in 2016-17, the year before Sokolov came to the QMJHL.). On the Moncton side of the equation, Alexander Khovanov is on the league’s longest current point streak (17 games), averaging two points a game, and is just two points away from hitting the century mark.

A pair of Eagle blue liners are also looking to carve a bigger spot in the team’s history books. Adam McCormick is currently tied for second all time in career points for a defenseman by an Eagle with 121, while Nathan Larose is tied for second in goals in a single season with 17. (Larose could also tie or pass Jérémy Beaudry’s record of 19 by year’s end).

Each side will hope to get healthier. It’s likely the Eagles will only regain the services of Mathias Laferrière and perhaps Jarrett Baker having also missed Tyler Hinam and Jérémy Langlois on this past weekend’s two game road trip. For Moncton, overage blueliner Christian Huntley has missed the past two games, and defenseman Axel Andersson (who recently had his rights traded Boston to Anaheim) hasn’t been in the Moncton lineup since the calendar turned to March.