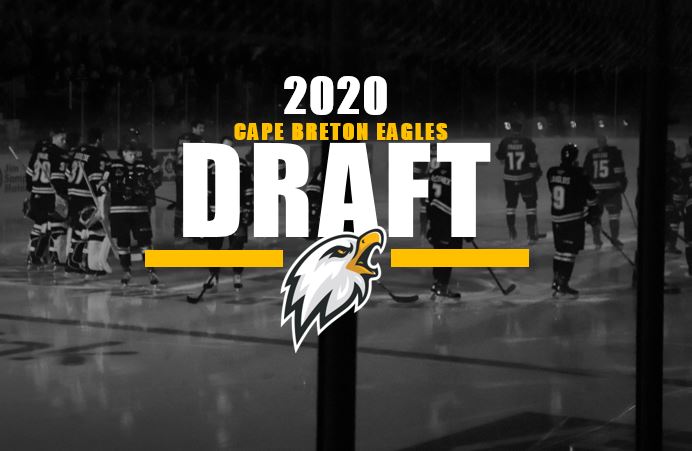 The Cape Breton Eagles drafted 17 players and made multiple trades as the QMJHL draft unfolded over two days this past weekend.

The Eagles first dove into the pool of defensemen in round five, drafting François-James Buteau of Collège Esther-Blondin in the Quebec midget AAA league and Jacob Long of Fredericton in the New Brunswick/PEI midget AAA league. By the draft’s conclusion the Eagles selected nine forwards, six defensemen, and two goaltenders. Cape Breton took two Cape Bretoners with its final two choices: defenseman Liam Trenholm of Cape Breton and forward Reese Allen of Sydney, both teams in the Nova Scotia Major Midget Hockey league.

In total the Eagles picked seven players from Nova Scotia, six from Quebec, and two from each New Brunswick and PEI. With the exception of forward Davis Cooper (2003), all draft picks were 2004 born players.

A series of trades led to the Eagles adding 17 year old defenseman Jacob Squires for the coming season. Last year the 6’1, 173 pound defenseman collected three assists in 52 games with the Rouyn-Noranda Huskies.

Prior to acquiring Squires, the Eagles moved the 49th overall pick (in the third round) to Shawinigan in exchange for the 54th (also in the third round) and 89th (fifth round) choices. The 54th pick was then sent to the Huskies along with Sherbrooke’s 8th round selection in 2021, in return for Squires.

The QMJHL will hold a separate draft for American players this coming Monday, June 8th at 11 AM Atlantic time. The Eagles will choose 15th and 33rd in the two round event. Teams are not allowed to trade their choices in the American draft.

Please find below the list of players selected by the Eagles in the 2020 QMJHL draft. The list includes the round and pick the player was chosen with, the player’s name, position, prior club and league, height and weight, and statistics from the 2019-20 season.

*Denotes 2003 born player. All other selections are 2004 born players.