Eagles Kick Off Road Trip Tonight In Quebec Vs. Remparts 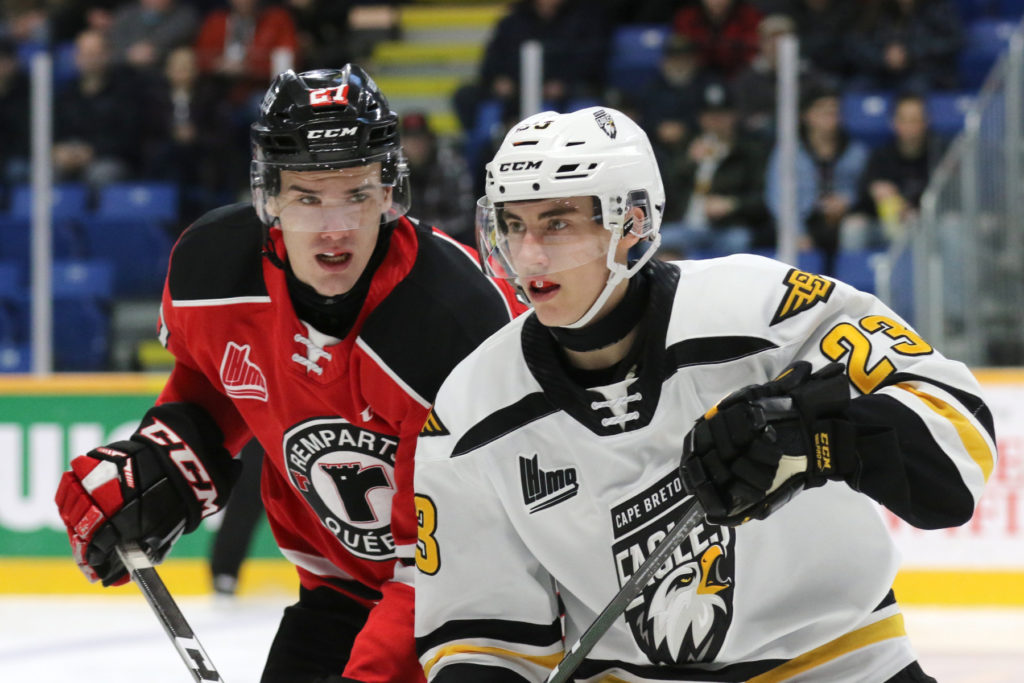 The Cape Breton Eagles begin their second Quebec road trip of the season tonight with a visit to one of the top dogs in the QMJHL- the Quebec Remparts, coached by Patrick Roy. It’s the first of a three game in three nights stretch for the Eagles.

The Eagles were able to snap a losing streak with a 4-3 overtime win against Moncton on Tuesday. Émile Hegarty-Aubin stretched his point streak to three games as he was the overtime hero, and Nicolas Ruccia was excellent in goal, stopping 31 of 34 shots. Ivan Ivan also scored in the win, continuing a torrid stretch that has seen him score in ten of his last 11 games.

The Eagles were victorious in the absence of forwards of Nicholas Girouard & Connor Trenholm along with captain Sean Larochelle on the blueline. The status of Trenholm & Larochelle is unknown for this evening but both players did make the trip to Quebec City.

Tonight will be a homecoming for Eagles defenseman Romain Rodzinski who spent the last two seasons with Quebec before coming to the Eagles in an off-season deal. In total, Rodzinski played 91 games with Quebec over three years.

He arrived in Cape Breton after a swap for forward Davis Cooper, who tonight will play the Eagles for the first time. (Cooper played 28 games for the Eagles last season.) It’s the first of two meetings between the Eagles & Remparts this season.

There is no shortage of star power on a Remparts team that ultimately lost their Memorial Cup hosting bid to Saint John. In total, the Remparts have five NHL drafted players, including St. Louis first round draft pick Zachary Bolduc who has 20 points in 17 games. Also drafted are forwards James Malatesta (Columbus) & Viljami Marjala (Buffalo) along with defensemen Evan Nause (Florida) & Louis Crevier (Chicago). The Eagles will also have to keep their eye on Remparts overage captain Théo Rochette, who is tied for fifth in QMJHL scoring with 27 points in 18 games.

Tonight’s game is available for purchase online at https://watch.chl.ca and will also be televised in French on TVA Sports. You can also hear all the action beginning with the pre-game show with Patrick McNeil at 7:30 PM on 1270 AM CJCB or online at www.cjcbradio.com