Eagles In Saint John For Return Matchup With Sea Dogs 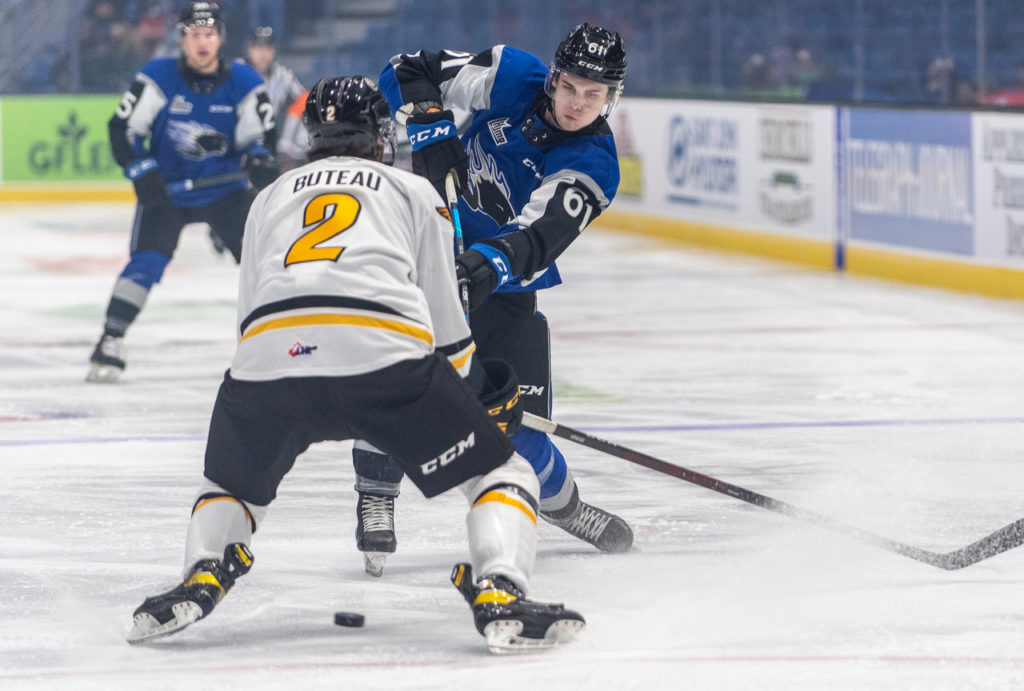 The Cape Breton Eagles will look to sweep a two game set against the Saint John Sea Dogs as the club finishes a stretch of six games over nine nights on Saturday. The Eagles were victorious on Friday night, topping Saint John 5-4 in a shootout. It was the third consecutive game for that Eagles that went to overtime, following losses to Bathurst & Shawinigan at home.

Last night was a big homecoming for both Dawson Stairs & Nicholas Girouard, who were playing their first games since being dealt from Saint John to Cape Breton (Stairs in the middle of last season, Girouard in the off-season.) Girouard recovered from missing a penalty shot in the first period to collect two points, while Stairs had a three point night. Girouard is now on a five game goal scoring streak, currently the longest in the QMJHL. From the backend, Jérémy Langlois also notched three points including his first goal of the season. Ivan Ivan’s shootout winning goal was his third shootout goal in three attempts this season.

For Saint John, an issue this year has been getting secondary scoring and in the early part of last night’s game the theme continued as both goals came from William Dufour, playing on the top line with Brady Burns and Josh Lawrence. But the breakthrough came in the third period when Carter McCluskey & Cam MacDonald were able to hit the back of the net. Saint John will look to keep the pressure up from last night’s third period when they put 20 shots on the Cape Breton goal.

The Sea Dogs could opt to make a change in goal as well. Jonathan Lemieux has started all six games this year, but was relived by Noah Patenaude in last night’s game and the dual citizen Swiss-Canadian was named first star of the game. Patneaude has a 941 save percentage through his two relief appearances this season.

Coming into this evening, the Eagles hold a record 2-2-3 (2-0-1 on the road) while the Sea Dogs are 1-3-2 (0-1-2 at home). Tonight’s game is available for purchase online at https://watch.chl.ca. You can also hear all the action beginning with the pre-game show with Patrick McNeil at 6:30 PM on 1270 AM CJCB or online at www.cjcbradio.com