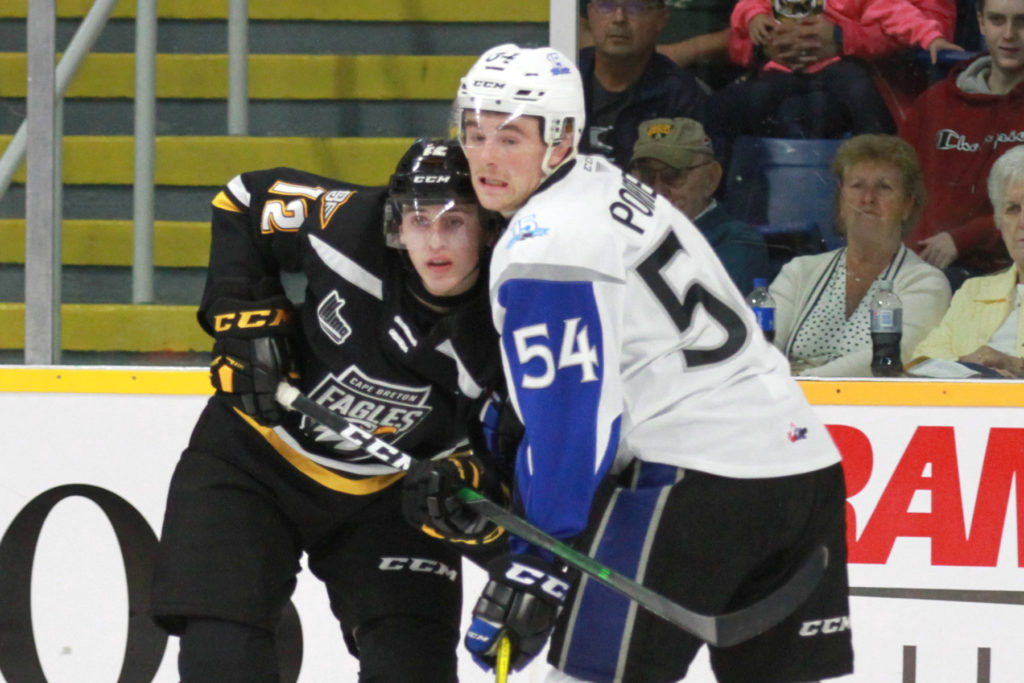 The Cape Breton Eagles continue their most recent homestand, and tonight it’s a return to divisional play as they take on the Saint John Sea Dogs. It’s the third meeting of the season between the two teams- with all three thus far taking place at Centre 200. All eyes will be on the Nest, as the Eagles/Sea Dogs game is the only one on the calendar in the QMJHL on Wednesday night.

The Eagles got the better of Saint John in the opening two meetings: Cape Breton’s home opener was one of the most memorable in team history, a rally from down 5-0 for a 6-5 victory. The following day the Eagles completed the opening weekend sweep with an 8-3 rout.

William Grimard has been given the ball in the Eagle net in the absence of Kevin Mandolese and seems to be getting better with more starts based on play over the weekend. In a 2-1 shootout win over Baie-Comeau and a 2-1 loss to Chicoutimi, the Eagles goaltender stopped 79 of 82 shots.

Tonight the Eagles will almost certainly be without forward Shaun Miller, likely to be suspended after receiving a game misconduct for slashing on Sunday. This season the 20 year old forward has 20 points through 25 games. Also, the Eagles are not expected to receive any relief from injuries that have sidelines forward Cole Fraser, defenseman Adam McCormick as well as Mandolese.

One player who should be in the lineup is Saint John forward Maxim Cajkovic, a draft pick of the Tampa Bay Lightning. Cajkovic missed the first two games between the two clubs due to injury. In the month of November, he has a point in every game, with 15 points in total over eight matches.

While goaltender Zachary Bouthillier (Toronto) is the only other NHL drafted player on the Dogs, that will certainly not be the case next season as three different Saint John players were listed on NHL Central Scouting’s recent players to watch list. Defenseman Jérémie Poirier was given an “A” ranking, which projects as a first round pick- he’s collected 26 points in 26 contests thus far this year.