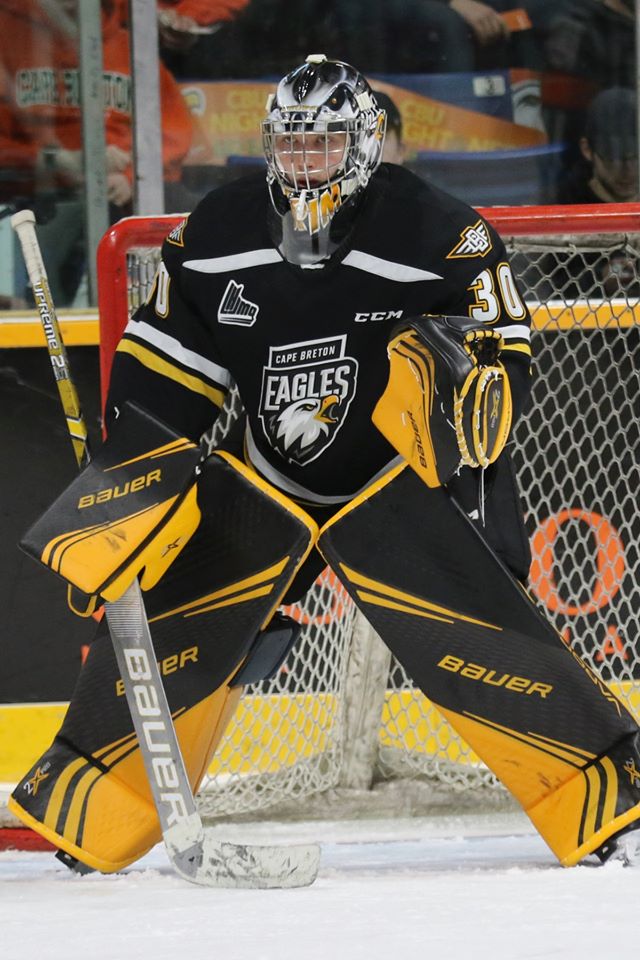 The five home game stand for the Cape Breton Eagles continues this afternoon at Centre 200 with a visit from another East Division opponent- the division leading Chicoutimi Saguenéens.

It’s the only visit the Sags will make to Centre 200 this year. The Eagles will look for the season sweep, having defeated Chicoutimi 6-3 on October 5th. The victory came at the conclusion of a three game trip through Quebec for the Eagles, while today’s game marks the end of a three game Maritime swing for Chicoutimi.

Chicoutimi opened the trip with a 4-0 loss in Moncton on Thursday, before bouncing back with a 5-4 victory in Saint John on Friday. They did not play last night while the Eagles topped Baie-Comeau 2-1 in a shootout.

The Eagles will hope for another strong showing from William Grimard, who will likely be starting his ninth straight game due to an injury to Kevin Mandolese. Last night against Baie-Comeau Grimard was sensational, stopping 46 of 47 shots

It’ll be a special day at the Nest for Shawn Boudrias, as the Eagles forward plays in his 250th regular season game in the QMJHL. Thus far 48 of those games have been played with Cape Breton, and he’s notched 42 points during his tenure as an Eagle.

A star-studded Chicoutimi club contains four NHL drafted players: forwards Rafaël
Harvey-Pinard (Montreal), Samuel Houde (Montreal), Vladislav Kotkov (San Jose) along with defensemen Artemi Kniazev (San Jose). All three forwards are producing at over a point per game clip thus far this season. Another scoring threat, overage Justin Ducharme (7 goals in 16 games), may have a familiar last name to Eagles fans as his brother Xavier is an Eagles prospect (drafted in the seventh round this past June). Unfortunately Chicoutimi will be missing forward Hendrix Lapierre, who suffered a concussion in Moncton on Thursday.

This afternoon’s game goes at 4 PM. Tickets can be purchased at the Centre 200 box office, by phone at 902-564-2200 or online at https://tickets.capebreton.ca/Online/default.asp Go Eagles Go!