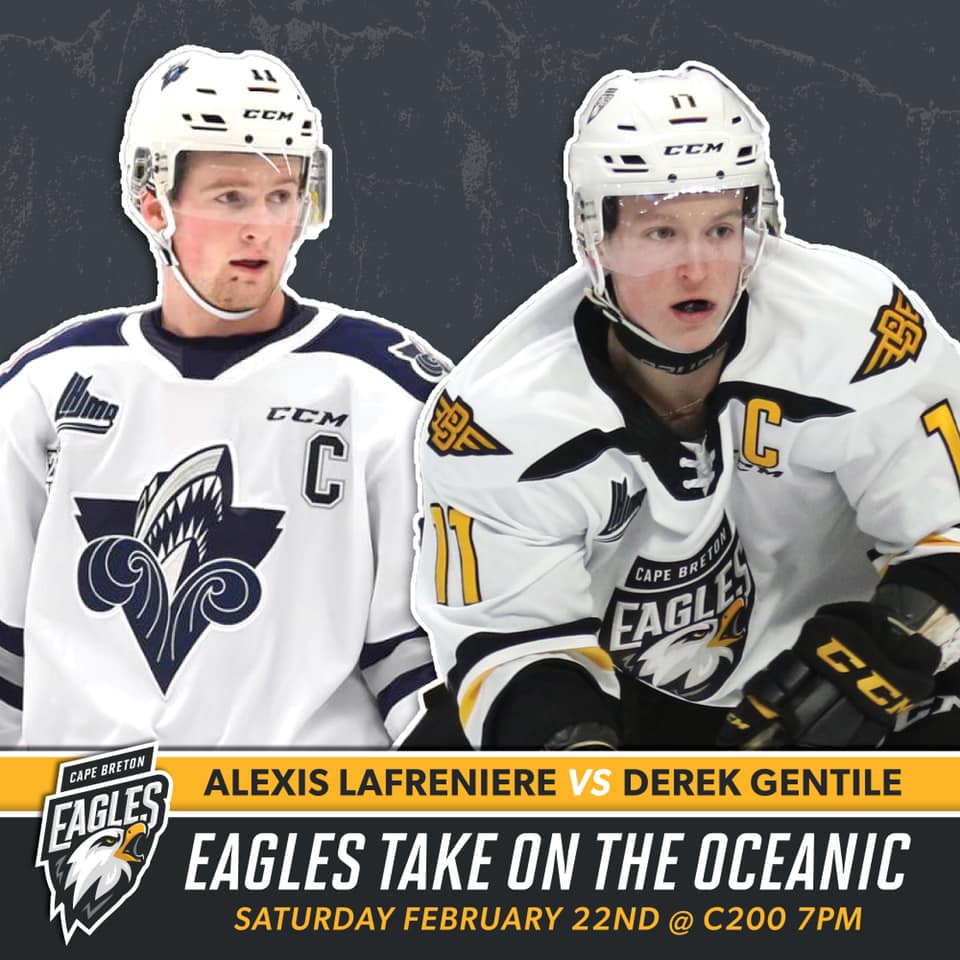 The most anticipated game of the season comes this evening at Centre 200, with potentially big implications on the QMJHL playoff picture.

Tonight is the lone visit the Rimouski Océanic will make to Sydney this season, and the lone visit of superstar forward Alexis Lafrenière. Lafrenière is the consensus #1 pick for the upcoming NHL draft, almost certain to be in the big league next year, and should he go #1 as expected he’ll be the first Quebecer to do since Cape Breton’s Marc-André Fleury in 2003.

While there is plenty of buzz around the play of Lafrenière, this is also a critical game for the QMJHL standings. Currently Rimouski is three points ahead of Cape Breton, but the Eagles have two games in hand. It’s the final time the Eagles and Océanic will meet this season.

Sokolov had missed three games with injury, but after a goal last night leads the league with 41 red lights. Despite missing the last ten games, Larose still ranks 22nd among QMJHL defensemen in points- but only fourth on his own team, behind Jarrett Baker, Xavier Bouchard, and Adam McCormick.

Lafrenière is the key figure in the Rimouski offense- leading the league with 101 points while no other player had 90. Having won the gold with Canada at the World Juniors, the Océanic stud has 17 points in seven games in the month of February.

He, along with the rest of his teammates, was shut down in 1-0 loss to Halifax on Thursday. It was the first regulation loss for Rimouski since January 17th. Following a twelve game winning streak, the Océanic were topped 4-3 in overtime in Moncton on Wednesday night prior to the loss in Halifax.

Much as the Eagles made additions during the QMJHL’s trade window, so did Rimouski. Up front the Océanic added former 40 goal man Nicolas Guay along with Andrew Coxhead. On the backend, Rimouski picked up one of the most coveted defensemen in Rouyn-Noranda’s Justin Bergeron, as well as Halifax’s Walter Flower. Rimouski also added netminder Creed Jones from Gatineau, and a very familiar face to Eagles fans- forward Olivier Bourret.

The 19 year old Bourret played 179 games with the Eagles and is playing against Cape Breton for the first time in his QMJHL career. He has seven points in 24 games since moving to Rimouski.

Another Rimouski player the Eagles didn’t see in October is Zachary Bolduc. Rimouski’s first round pick this year originally elected to play in the USHL, but reported to the QMJHL shortly after the game against the Eagles and is fourth in rookie scoring- only three points behind the leader in that department, his teammate defensemen Isaac Belliveau.

Saturday will be a busy at Centre 200 for Eagles fans. From 2 PM to 3 PM, Eagles owner will be holding a public owner update in the main concourse, talking with Eagles fans about the changes in the last year and what fans can expect in the future.

This evening’s game goes at 7 PM. Tickets, which are going fast, can be purchased at the Centre 200 box office, by phone at 902-564-2200 or online at https://tickets.capebreton.ca/Online/default.asp Go Eagles Go!