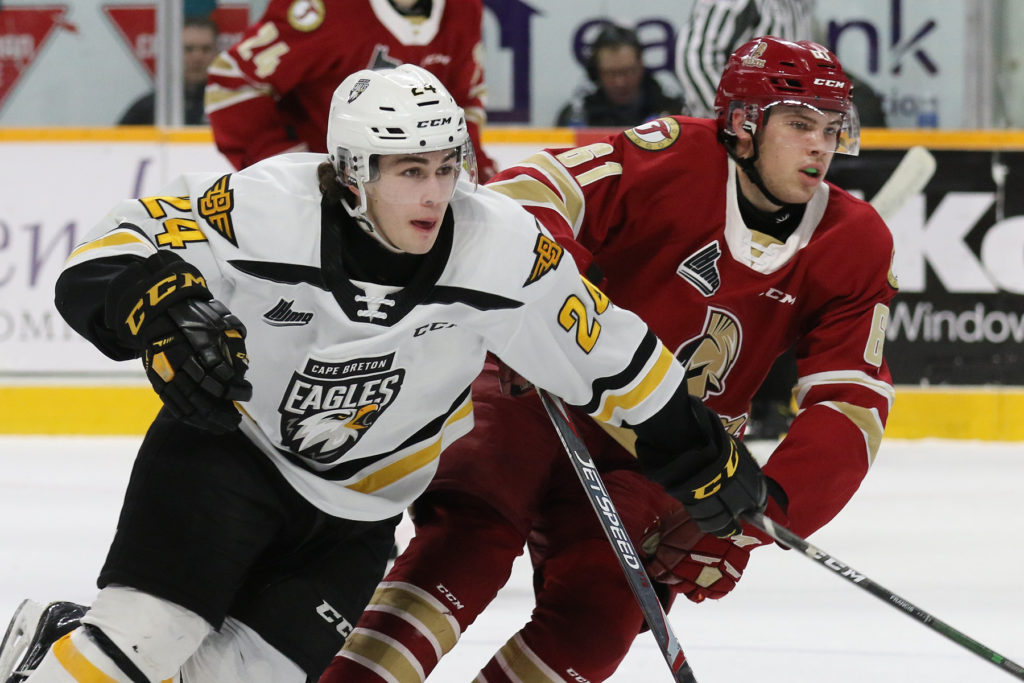 The Cape Breton Eagles team record home winning streak came to an end at 12 games on Wednesday following a 4-2 loss to the Acadie-Bathurst Titan. In the first game following a long road trip the Eagles were doubled up in a game that saw no shortage of discussion points regarding the officiating.

Special teams was the story of the opening period as the Titan earned five straight power plays, putting the Eagles short handed for six minutes and 21 seconds in succession, including two separate instances of 5 on 3 play. But it was the Eagles who would leave that sequence with the lead.

Derek Gentile took a double minor for high sticking, sandwiched between minor penalties. With Tyler Hinam in the box for tripping, Gentile was back on the ice and deked around Tristan Bérubé to beat the Bathurst goaltender with a backhand and give the home side a 1-0 lead.

While the Titan were unable to capitalize on their power plays, Bathurst did find a goal at even strength prior to period’s end. Olivier Coulombe passed the puck down the right side of the boards to Rémy Anglehart. Anglehart put a backhand shot on William Grimard, and the rebound came out to Mark Rumsey who tied the game at one.

The fans at Centre 200 had more opportunity to voice their displeasure with the officials in the second period when Matthew Gordon and Jérémy Langlois were both given minor penalties at the same time, opening the door for a full two minute 5 on 3. It was negated when Cole Huckins was sent off and neither team scored when those players were in the box.

There were goals to come in the middle stanza though- on more special teams play. With Eagles forward Shawn Element in the box, the Bathurst power play finally connected as Logan Chisholm finished a cross-crease pass. Grimard came across and got a piece of the puck but it was a ruled a goal on the ice with no review. In the aftermath, Tyler Hinam took a ten minute misconduct and a minor penalty, which the Eagles killed off.

The Eagles did get their first full power play before period’s end, but the Titan would end up adding to their lead while short handed. After miscommunication between Grimard and Ryan Francis behind the net, Mathieu Desgagnés rushed behind the net, picked up the puck and put it into the open cage to make it 3-1, which is how the period would finish.

There was not much in the way of special teams play in the third period- two power plays, both going to Cape Breton although one coming in the final 15 seconds. It was at even strength the Eagles would get closer as Shawn Boudrias whipped a shot from the left face-off circle by Bérubé.

With over 90 seconds to play, Eagles coach Jake Grimes lifted Grimard for an extra attacker. The Eagles had some chances but Desgagnés hit the empty net to clinch a 4-2 victory for the visitors.

Bérubé picked up the win, stopping 38 of 40. Grimard stopped 22 of 25 in the loss in addition to the empty netter.

The Eagles played the game with 17 skaters as Nathan Larose, Egor Sokolov, Connor Trenholm, and Mathias Laferrière all missed the game to injury.

Final Shots On Goal: 40-26 in favour of Cape Breton