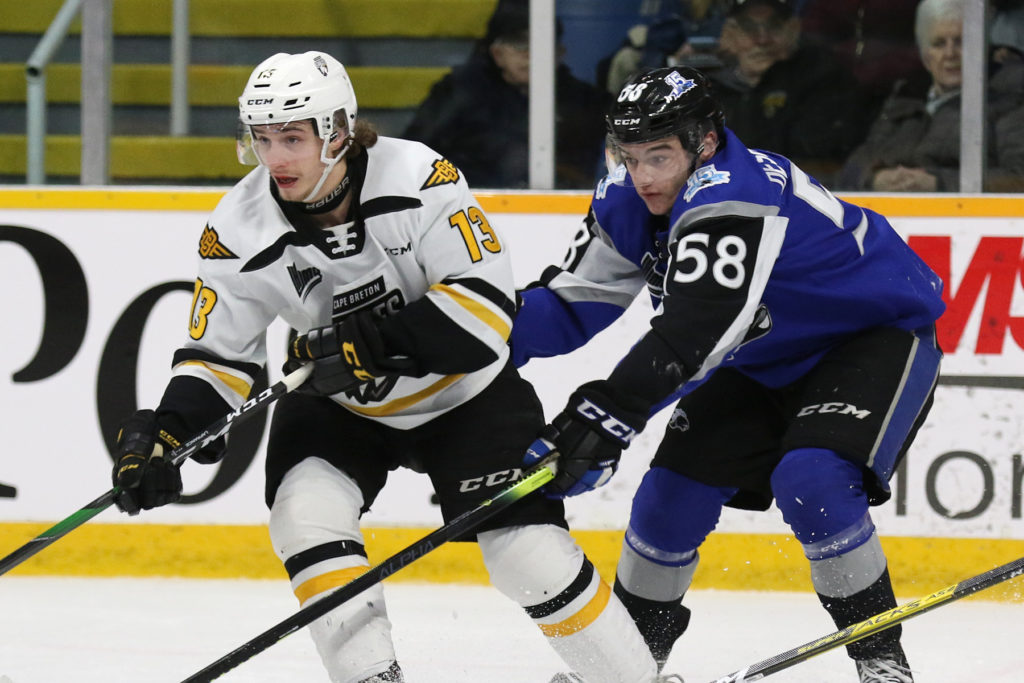 The Cape Breton Eagles are back in the win column after a 5-4 victory over the Saint John Sea Dogs.

Saint John gained the early jump on the Eagles, as Joshua Roy took advantage of traffic in front of the Eagles goal to make it a 1-0 score. Before the nine minute mark, the lead doubled: in a 2 on 1 situation, Adam McCormick was able to take away the passing option but Anderson MacDonald put the puck precisely in the top corner to make it a 2-0 lead.

Maxim Cajkovic had an opportunity to put the visitors up by three, coming in alone past the hashmarks but was denied by Kevin Mandolese. Some good work by Cajkovic then earned the Sea Dogs a power play- however, it was the Eagles that would take advantage.

Coming into the zone short handed, Shawn Element caught netminder Zachary Bouthillier out of the net. Earning the puck in the corner he sent the it in front to Derek Gentile, who put the puck by the Sea Dogs netminder to make it a 2-1 game. (Gentile was honoured prior to the game for having played his 300th game in the QMJHL on the recent trip- Eagles principle owner Irwin Simon and QMJHL Giles Courteau were on hand for the ceremony). The period would end with the score at 2-1.

Mandolese and Bouthillier were both dialled in to start the second period, as the game wouldn’t see any more goals for the first 16 minutes of the second stanza. When the goals did come, the game changed on a pair of goals involving Cape Breton’s Ivan Ivan.

Ivan jumped into the play to create a 3 on 2, and while Bouthillier turned aside his original shot, Liam Kidney was there to push the rebound over the goal line. Then with 73 seconds left in the period, Ivan took advantage of some work along the boards by Félix Lafrance, firing a puck just inside the post to give the Eagles a 3-2 edge heading into the third period.

In the final frame it was time for the Eagles to earn their first two goal lead of the night, thanks to some nice work from Ryan Francis. Francis circled the net, getting Bouthillier out of position and firing the puck in front to Egor Sokolov who wired it into an open goal.

It was the 41st goal of the season for Sokolov, who was making his return after missing three games with a facial injury. The Eagles also regained the services of defenseman Nathan Larose, who had missed ten games with illness.

The teams would continue to trade goals before period’s end. Maxim Cajkovic pulled Saint John back within one just past the halfway mark as he bounced the puck up and over Mandolese. The two goal margin was restored when Boudrias scored in a similar fashion, setting up in front of the net and over Bouthillier to make it 5-3.

Saint John would give one final push with a power play in the final four minutes of the period. Coach Jeff Cowan waited to pull his goaltender, and it would pay off- still playing 5 on 4, MacDonald finished a pass from Roy to cut the lead to 5-4.

With 65 seconds left, Cowan lifted his goaltender Bouthillier for an extra attacker. But the visitors were unable to find a tying goal and the Eagles picked up a 5-4 victory.

Mandolese turned aside 31 of 35 shots in the win, while Bouthillier stopped 35 of 40 in the loss.

Tomorrow is a big night at Centre 200 as the concensus #1 pick in the 2020 NHL draft Alexis Lafrenière makes his lone regular season appearance as the Eagles host the Rimouski Océanic. Puck drop is at 7 PM, and tickets can be purchased at the Centre 200 box office, by phone at 902-564-2200 or online at https://tickets.capebreton.ca/Online/default.asp

Final Shots On Goal: 40-35 in favour of Cape Breton