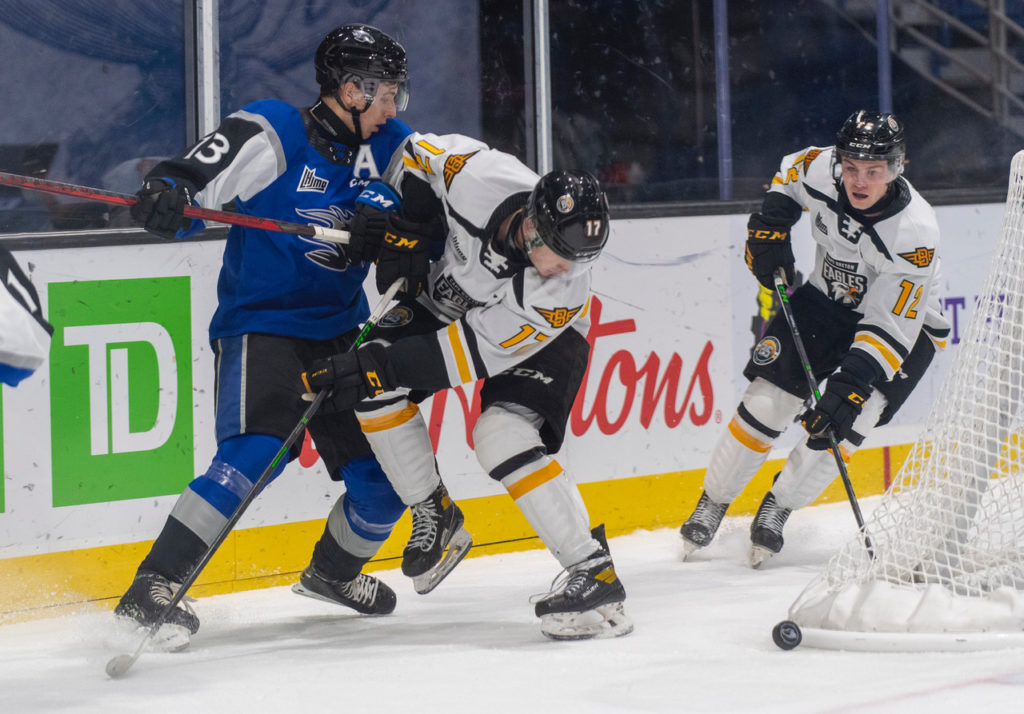 The third time was the charm as the Eagles held off a Saint John rally to win 5-4 in a shootout in New Brunswick Friday night. It was the third straight game that the Eagles had gone to overtime against a President’s Cup contender, having dropped overtime games to Bathurst & Shawinigan earlier this week.

The first period was dominated by the visitors, even after Nicholas Girouard failed to score on a penalty shot. He’d factor into the scoring before the period was over- as a nifty cross-ice pass set up Connor Trenholm for a tap-in on the opening goal.

Saint John’s penalty trouble allowed the Eagles to establish a greater edge before period’s end. With the Eagles already on the power play and another delayed penalty called, Dawson Stairs hammered a shot by Jonathan Lemieux to push the edge to 2-0. While Saint John would kill off the second minor in that sequence, the Eagles added another power play goal before period’s end when Girouard tipped a Stairs shot by the Saint John netminder to make it 3-0.

Gordie Dwyer opted to change goaltenders, lifting Lemieux for Noah Patenaude. It seemed to spark his team immediately- just 52 seconds after the Girouard goal, William Dufour cashed in on a one timer and it was 3-1 at intermission.

Dufour scored on another one timer in the opening 30 seconds of the middle stanza and it was a one goal game. But the next goal belonged to the Eagles, a high Jérémy Langlois shot after the halfway mark of the period, and it was 4-2 for the Eagles heading Into the third period.

Just like in the second period, Saint John was quick to score in the third- Carter McCluskey finishing a nice feed from Charles Savoie at the side of the goal to cut the edge to 4-3. This time Saint John completed the comeback, as with just over five minutes left in regulation, Cam MacDonald found the equalizer. In total Saint John put 20 shots on the Eagles goal in the third, but Rémi Delafontaine held the fort to send the game to overtime.

It was the Eagles who dominated the shot clock in the extra session, in part due to yet another power play opportunity as Charlie DesRoches was sent off for interference. But Patenaude stood tall and the game headed for a shootout.

Neither team could ting the twine in the first round, as Saint John’s Brady Burns and Cape Breton’s Girouard were both denied. In round two, Dufour completed his unofficial hat trick, but Stairs countered for the Eagles. After a miss from Evgeny Sapelnikov, it was all in the hands of Ivan Ivan- who put it through the legs to Patenaude to secure the win for the Eagles.

Delafontaine stopped 44 of 48 shots in picking up the win. Patneaude turned aside 23 of 24 in the loss, while Lemieux allowed three goals on 12 shots in his 17:06 of playing time.

The same two teams will do battle tomorrow night in Saint John. Puck drop on Friday is at 7 PM. The game is available for purchase online at https://watch.chl.ca. You can also hear all the action beginning with the pre-game show with Patrick McNeil at 6:30 PM on 1270 AM CJCB or online at www.cjcbradio.com

Final Shots On Goal: 48-36 in favour of Saint John