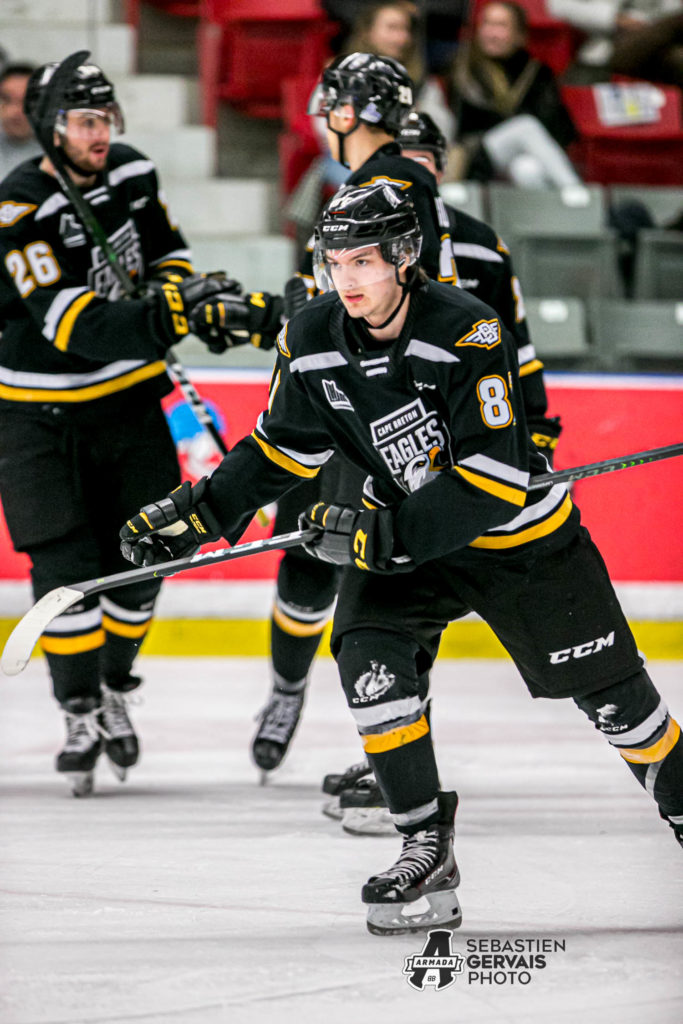 The Cape Breton Eagles jumped back into the win column on the second game of a six game road trip. Mathias Laferrière’s first career hat trick led the Eagles to a 5-1 win over the Blainville-Boisbriand late Saturday afternoon.

It was a fast paced period with plenty of action on both sides of the ice. At the 8:25 mark the Eagles opened the scoring with some nice passes that criss-crossed the ice. Egor Sokolov sent the puck to the blue line for Xavier Bouchard, who in turn set up a Laferrière one timer to make it 1-0. Before period’s end, the score was tied as Yaroslav Likhachev set up in front of the net to get the puck by Kevin Mandolese.

There was just one goal in the second period but no shortage of action, beginning with an energetic punch up between Cape Breton’s Shawn Element and Blainville-Boisbriand’s Nathan Lavoie. Both players threw several heavy rights with Element gaining the advantage.

The middle frame also saw the Eagles find the go ahead goal, this time staying in the lead. The sequence actually started after Cape Breton iced the puck and coach Jake Grimes elected to call a time out. It proved to be effective as a rested group was able to get the puck out and the Eagles took control in the Armada zone. As Blainville-Boisbriand netminder Emile Samson went down to play the puck, Egor Sokolov circled the net and fed it to Laferrière out in front who put it above the netminder to give the Eagles the lead.

A third period power play would help the Eagles put the game out of reach, with goals less than two minutes apart. With just seven seconds left in a minor to Justin Gosselin, Tyler Hinam masterfully redirected a point shot from Bouchard by Samson. Then at even strength Laferrière completed the hat trick. After driving the net for a quality scoring chance, Laferrière fired a sharp angle rebound that went off Simon Lavigne and in the net. A video review deemed it a good goal.

Blainville-Boisbriand had one last gasp, when Shawn Boudrias was sent to the box with six minutes left. The Eagles kept the Armada at bay. In the later stages of man advantage Bruce Richardson lifted Samson for an extra attacker. But Boudrias stayed on the ice after coming out of the box and hit the open goal to seal a 5-1 victory.

Mandolese stopped 33 of 34 shots in the win, while Samson turned aside 33 of 37 in addition to the empty netter.

The Eagles will finish their three in three stretch tomorrow afternoon as they visit the Drummondville Voltigeurs. Puck drop is 4 PM Atlantic time, and you can hear all the action beginning with the pre-game show with Patrick McNeil at 3:30 PM on 1270 AM CJCB or online at www.cjcbradio.com. Go Eagles Go!

Final Shots On Goal: 38-34 in favour of Cape Breton