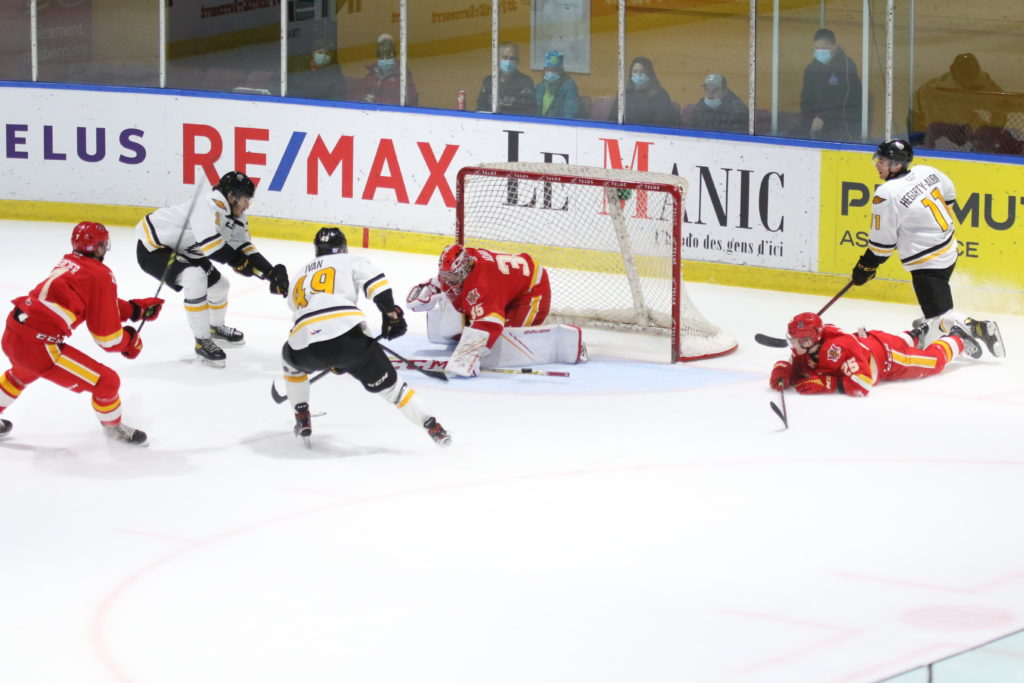 The Cape Breton Eagles’ road trip through Quebec ended quietly as the club was shut out 5-0 in Baie-Comeau on Sunday afternoon.

The story of the game would be Baie-Comeau’s top line, and the scoring started when Raivis Ansons in the opening five minutes.  The lead doubled when Andrew Belchamber sent a pass to Xavier Fortin in the slot and he hammered the one timer home to make it 2-0.  (Fortin would unfortunately not finish the game as he left the game in the second period with an apparent knee injury.)

Baie-Comeau’s top line was at it again in the second period, as Ansons and Jacob Gaucher scored less than two minutes apart before the seven minute mark of the middle stanza.  There were some fireworks in the second period also as during one sequence, both Squires brothers were sent off along with Baie-Comeau’s Nathan Baril & Felix Gagnon, and not long after Mikhail Nizovkin missed the second half of the period with a ten minute misconduct.

There was not much in the way of opportunity in the third period, as the teams combined for just 13 shots but there was a goal as  Belchamber jammed the puck over the line in a goalmouth scrum to finalize the scoring at 5-0.

Olivier Adam stopped all 23 shots in picking up the shutout for the Drakkar, while Nicolas Ruccia allowed five goals on 29 shots in goal for Cape Breton.

The Eagles played the game with 17 skaters as forward Matt MacDonald and defenseman Emile Perron were late scratches due to injury and illness, respectively.  Perron is scheduled to temporarily leave the Eagles to participate in the Capital Hill Challenge Series, featuring three teams of Canada’s top under 17 players along with the Canadian national women’s team.

The Eagles are next in action on Friday night when the host the Blainville-Boisbriand Armada at 7 PM. Tickets can be purchased at https://www.ticketmaster.ca/cape-breton…/artist/891825. They are also available for purchase in person at the Centre 200 box office and by the phone during box office hours at 902-564-2200

Final Shots On Goal: 29-23 in favour of Baie-Comeau