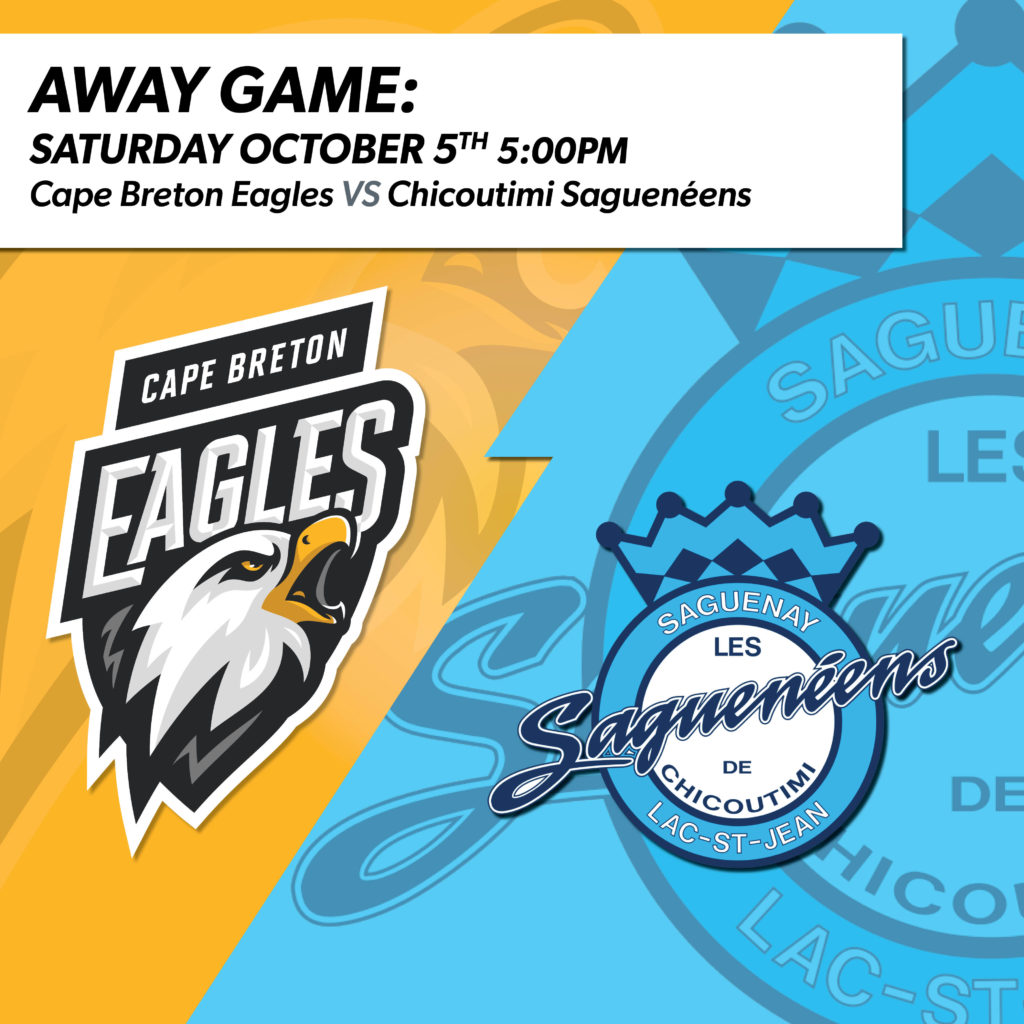 The two division leaders of the Eastern Conference will go head to head tonight as the Cape Breton Eagles finish a three game swing through Quebec with a battle in Chicoutimi against the the Saguenéens. Both teams were victorious last night: the Eagles won 7-2 in Baie-Comeau while Chicoutimi topped Halifax 4-1.

It was an incredible night for the Eagles top line in Baie-Comeau. Shawn Boudrias, Egor Sokolov, and Ryan Francis were all on the ice for all seven goals for the Eagles and for neither of the Baie-Comeau goals. Sokolov’s two goals put him in sole possession of second place in the QMJHL scoring race while five point outings from Francis and Boudrias have placed them in the top ten in scoring. The Eagles also possess the league’s leading scorer among defensemen, Jarrett Baker.

While the Eagles will be without defenseman Alex Falardeau as he serves the second game of a two game suspension, the club welcomed back goaltender Kevin Mandolese who picked up the victory last night, pushing his record on the season to 2-0. Thus far this season Cape Breton has a record of 5-1, while Chicoutimi has a record of 4-0-1. The Saguenéens are one of just two QMJHL teams to have not lost in regulation yet this season.

Chicoutimi’s impressive record comes despite playing the first four games of the season on the road. Last night the Sags received a boost- not just from playing at home for the first time this season, but with the return to the lineup of import Vladislav Kotkov from the San Jose Sharks organization. The Russian had 34 goals last year and two in his season debut last night.

Kotkov is one of four NHL drafted players on the Sags- Chicoutimi’s other Russian, blueliner Artemi Kniazev, was also tabbed by the Sharks this past June. Up front there are a pair of Montreal draft choices- Samuel Houde and Rafaël Harvey-Pinard, the latter whom is the Sags’ captain and captained Rouyn-Noranda to the Memorial Cup last season.

Hendrix Lapierre, who already has six assists this season and was chosen #1 in the 2018 QMJHL draft, will almost certainly be added to the NHL draftee list as most experts expect Lapierre to be a first round selection this June. Unfortunately, Chicoutimi’s other first round pick from 2018, Théo Rochette, is out for at least a month with mono.

This will be the only visit the Eagles make to Chicoutimi during the regular season. Each of the last two seasons the Eagles have swept the season series with the Saguenéens, winning the last four meetings between the clubs.

Puck drop for tonight’s game is at 5:00 PM AST, and you can catch all the action beginning with the pre-game show at 4:30 with Patrick McNeil on 1270 CJCB (or online at cjcbradio.com). Go Eagles Go!