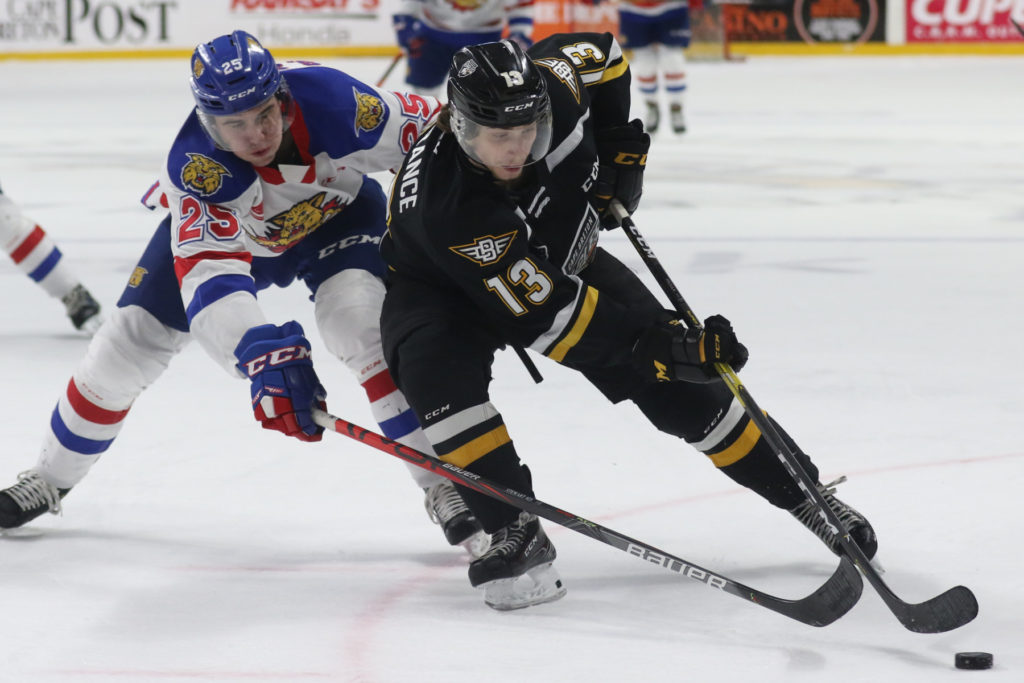 In a back and forth game featuring plenty of high end scoring chances, the Cape Breton Eagles topped the Moncton Wildcats 5-4 at Centre 200 on Sunday.

The Eagles struck first as a change to the club’s top line paid immediate dividends. Shawn Boudrias and Mathias Laferrière were placed on the same trio, and the duo hit the scoresheet before the halfway mark of the first period- two passes on a two on one saw Boudrias score the opening goal. Before period’s end, Moncton would equalize when Zachary L’Heureux passed up on an opportunity to shoot and passed to Jakob Pelletier at the side of the net who tied the game.

The teams traded goals again to start the second period- the Eagles went ahead once more when Brooklyn Kalmikov placed a shot in the top corner over Olivier Rodrigue. Pelletier tied the game on an interesting sequence- he was knocked to the ice after a hit by Laferrière, but got up in time to receive a pass from Alex Khovanov and tie the game.

There would be a big response from the Eagles though before period’s end, perhaps fittingly starting with Laferrière. Jarrett Baker was denied on a 2 on 1 by Rodrigue, who in turn also stopped Boudrias on a rebound. But Laferrière jumped into the play to put another go ahead goal by the Moncton keeper. Before period’s end, Ryan Francis jab in a loose puck in a goal mouth scramble and the Eagles had the first two goal lead of the day.

Francis was at it again to start the final period, putting a shot under the arm of Rodrigue to push the lead to 5-2. By the halfway mark, Moncton got the goal back when L’Heureux scored on his own rebound.

Moncton would inch even closer on the the first power play of the third period for either side (after no power plays in the second). Twelve seconds into the man advantage, Pelletier slid the puck from the blue line to Jeremy McKenna at the side of the goal, and Mika Cyr converted a cross-crease pass to put the Cats within one.

The visitors would get no closer, however. After Moncton called a timeout, the Eagles continued to press in the Moncton zone, not allowing Rodrigue to get the bench. As the Wildcats pressed to the game, there were fireworks- Khovanov and Laferrière were each sent off with just under a minute to go. While the 4 on 4 created more open ice for the Wildcats, they were also without one of their top stars as they persued the tying goal.

There was just 48 seconds left before Rodrigue got to the bench for the extra attacker. The Eagles held the fort in the 5 on 4 situation, ending a five game home stand on a winning note.

William Grimard picked up the win for the Eagles, stopping 36 of 40 shots in the win. Rodrigue allowed five goals on 33 shots in taking the loss.

The Eagles will now head out on the road to begin a home and home with the Halifax Mooseheads. Puck drop is at 7 PM on Friday night, and you can hear all the action beginning with the pre-game show with Patrick McNeil at 6:30 PM on 1270 AM CJCB or online at www.cjcbradio.com

Final Shots On Goal: 40-33 in favour of Moncton