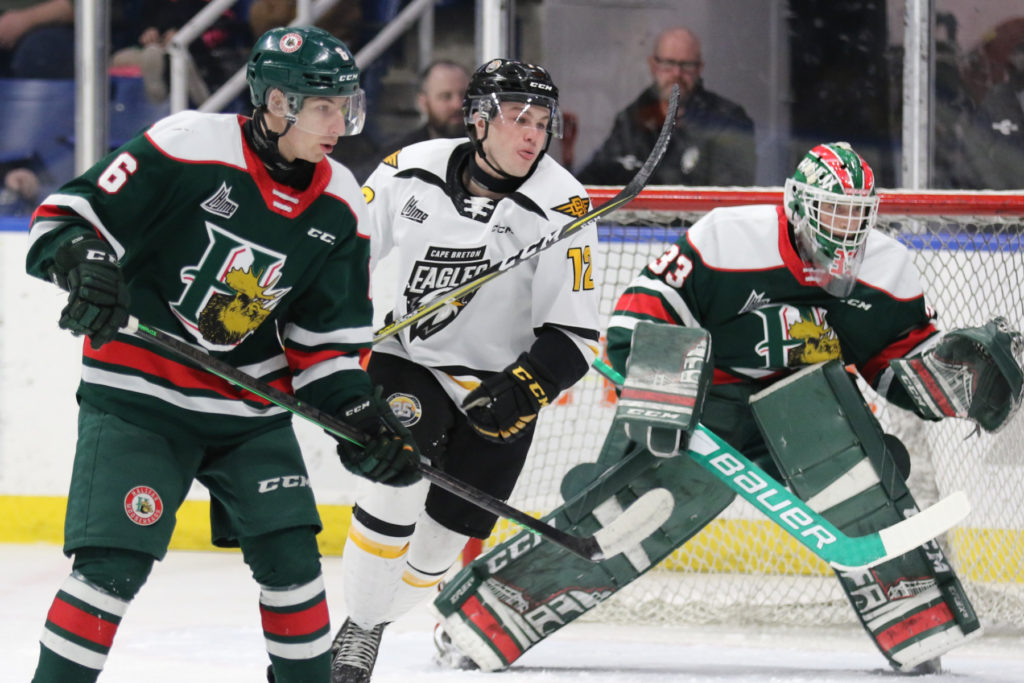 For only the third time in the club’s 25 year history, the Eagles will not qualify for the playoffs this season.  Halifax is still battling for positioning, and can clinch fifth place in the Eastern Conference with a win or a loss in overtime or a shootout.  Should the Eagles defeat Halifax in regulation time, the Moooseheads would fall to sixth in the conference if Rimouski defeats Québec later this afternoon.

Halifax comes to town on a six game winning streak.  One key to Mooseheads success has been the electrifying play of the top line of Mathieu Cataford, Elliot Desnoyers, and Jordan Dumais.  The 17 year old Dumais has skyrocketed to third place in the QMJHL’s scoring race, in part due to an absurd 11 game stretch in which the Moosehead forward has averaged three points a game.

Desnoyers, who represented Team Canada at the World Juniors, will almost certainly be playing his final QMJHL regular season game today as the Philadelphia Flyers draft choice has already signed an NHL contract. (Halifax forwards Zachary Beauregard & Zack Jones, along with defenseman David Lafrance, will not be back in the league next season as they are overage players.)

Today will be an emotional day for Eagles forwards Émile Hegarty-Aubin & Nicholas Girouard, as well as defenseman Sean Larochelle.  This afternoon will make the end of the careers for the three overage players, although unfortunately, Larochelle will likely not be able to play due to injury.

Hegarty-Aubin will be wrapping up a four year career, split with two seasons in Gatineau & two in Cape Breton.  Girouard & Larochellle both came to Cape Breton this off-season in deals.  Larochelle spent the prior three seasons with Victoriaville, winning the President’s Cup in 2021 while Girouard spent two seasons in Drummondville & and a year in Saint John before making his way to Sydney.  The three 20 year old players will be honoured before the game.

Due to the usual turnover that comes with the end of a major junior hockey season, it’s likely a number of other players will be playing their final games as Eagles, if not in the QMJHL.  19 year old import Ivan Ivan is not NHL drafted but has no doubt turned heads with his 31 goal, 32 assist season through 64 games in addition to representing the Czech Republic at the World Juniors, and he could have pro opportunities in either North America or Europe.

Season tickets are asked to use their February 3rd ticket for tonight’s game. Additional tickets for all Eagles home games can be purchased at https://www.ticketmaster.ca/cape-breton-eagles-tickets/artist/891825. They are also available for purchase in person at the Centre 200 box office and by the phone during box office hours (Mon-Fri, 11AM to 4 PM) at 902-564-2200