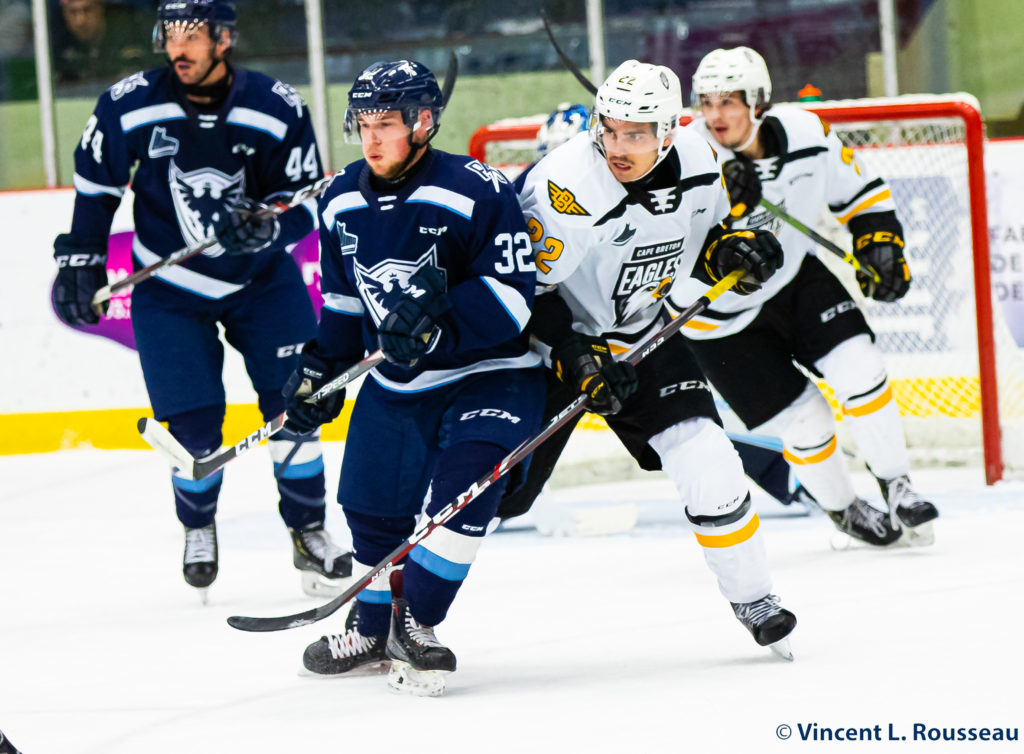 The Cape Breton Eagles generated their chances but couldn’t find a way to finish in a 6-1 loss to the league leading Sherbrooke Phoenix.

The Eagles fired the first six shots on goal of the game and would actually outshoot Sherbrooke in all three periods, but couldn’t find the first goal. Sherbrooke opened the scoring after the halfway mark of the opening period when Benjamin Tardif finished a cross ice pass from Xavier Parent. The Phoenix lead would double late in the corner, when Israel Mianscum fired a shot from the corner by William Grimard. It looked as though Mianscum was trying to centre the puck, but ended up bouncing it off Grimard’s pads and over the goal line. It was 2-0 after the first siren.

Mianscum would factor into the scoring again in the second period. With a face-off in the Eagles zone, Julien Anctil won the draw and flipped it right back to Mianscum who lifted it over Grimard’s shoulder to push the lead to 3-0. However, the Eagles would push back this time: Brooklyn Kalmikov hammered home a one timer from Ryan Francis on the power play, and it was 3-1 at period’s end.

Unfortunately for the Eagles, Sherbrooke would get their power play break through in the third period. Samuel Poulin deked his way to the front of the net and left the puck for a trailing Xavier Parent who would get the puck by Grimard to push the lead to 4-1.

The Eagles had opportunities with the extra man to get into the game, drawing back to back power plays in the second half of the period. (Both teams finished the night 1/4 on the man advantage.). The Eagles best opportunity came late in the first one of those power plays when Francis ripped a shot off the post, and it bounced off Samuel Hlavaj’s back before being cleared away from the crease. During the second of those two man advantages, the Eagles played the bulk of the power play without Shawn Boudrias after he took a shot off the arm, and didn’t return to action.

Having not scored on either power play Cape Breton coach Jake Grimes elected to keep a man advantage by pulling Gimard for an extra attacker. But Sherbrooke was able to clear their zone, and Parent scored his second straight goal of the period. Just 13 seconds later, and with under three minutes remaining, Samuel Poulin completed a highlight reel play from his back to put Sherbrooke up 6-1 and finish the scoring.

Prior to the game both teams had make a last minute alteration to their lineup with key forwards missing: Cape Breton’s Mathias Laferrière and Sherbrooke’s Félix Robert each missed the game with an illness.

Hlavaj was spectacular in the victory, stopping 42 of 43 shots. Grimard took the loss, allowing five gaols on 28 shots in addition to the empty netter.
The Eagles will continue their road trip through Quebec with a visit to Shawinigan to play the Cataractes Friday night. Puck drop is at 8:30 Atlantic time, You can hear all the action beginning with the pre-game show with Patrick McNeil at 8 PM on 1270 AM CJCB or online at www.cjcbradio.com

Final Shots On Goal: 43-29 in favour of Cape Breton