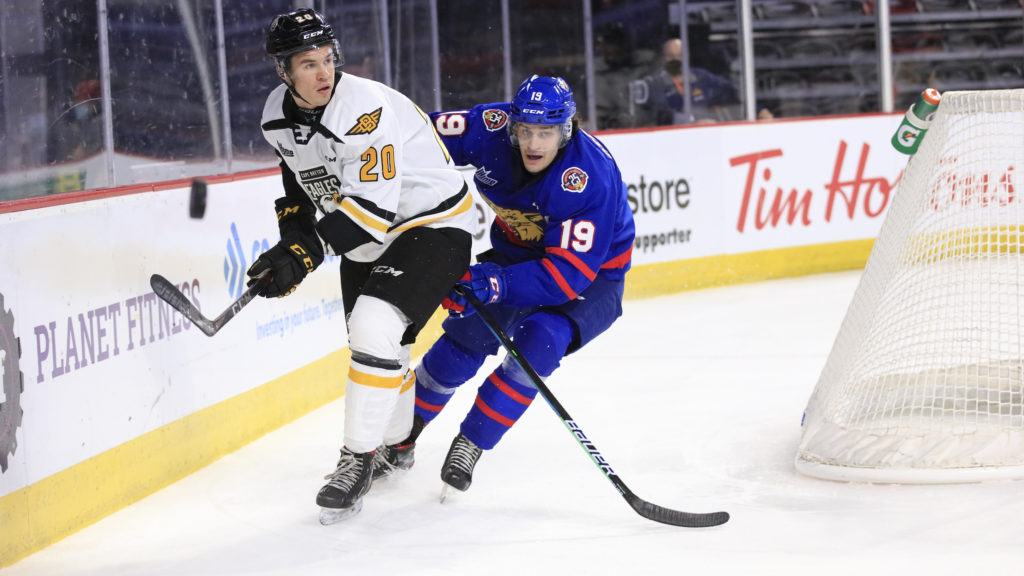 The Cape Breton Eagles picked up a point but couldn’t hold on to the lead in a wild 6-5 shootout loss in Moncton on Friday.

The Eagles got the scoring started in the opening period, as a Dawson Stairs top corner shot successfully converted the first power play of the night for either side. That was the only score in the opening twenty minutes, but the floodgates opened in the second stanza.

The period began with the Eagles killing the balance of a Jacob Squires penalty, and then doubling the lead to 2-0 as veteran Nicholas Girouard scored his first goal in Eagles colours. Just 21 seconds later, Moncton halved the advantage when Jacob Stewart completed a wrap around and put the puck over goaltender Nicolas Ruccia.

But the Eagle response to that goal was swift- two goals 70 seconds apart before the five minute mark. A miscue involving Moncton defenseman Anthony Hamel led to the third goal- the blueliner lost his stick, and tried to push the puck into goaltender Vincent Filion’s gear. But the Moncton keeper couldn’t hold the puck, it came out in front to Kian Bell who deked his way to the Eagles third goal. Next up it was Ivan Ivan zapping his first of the season by Fillion and it was 4-1.

Jacob Squires was next to get in on the action- the first career goal for the Eagles defenseman came through traffic after the halfway mark of regulation, and it was a 5-1 score. The Eagles would hit some penalty trouble late in the second period that allowed Moncton back into the game. Defensemen Conor Shortall & FJ Buteau were both given holding penalties at the same time, and Yoan Loshing ripped a shot from the right face-off circle to cut the lead to 5-2. The second penalty was killed and it was a three goal margin at the second break.

Moncton made a change to begin the third period, with Thomas Couture coming in to replace Filion in goal. Perhaps it helped spark a rally as Maxim Barbashev scored before the period was 100 seconds old. And then after the five minute mark, Jérémy Langlois was stripped off the puck behind the net, and it came out to Francis Langlois who moved around to beat Ruccia and make it 5-4.

In the final five minutes of the period, the Eagles had a sense of deja vu- another 5 on 3 opportunity for Moncton, albeit not for a full two minutes. But it was enough to allow the home side to tie the game, as a Charles-Antoine Pilote shot redirected off an Eagle skate in front of the goal to even the score. The second penalty was killed off, and the game went to overtime.

The two sides traded chances in overtime- Moncton outshooting Cape Breton 4-3- but there no game winner to be found and a shootout was needed to settle it. Both teams scored in the opening round: first Thomas Auger for Moncton, countered by Ivan for the Eagles. Then Loshing and Stairs failed to score for their clubs, sending it to the sudden death portion. Vincent Labelle put the home side in the driver’s seat with a goal, and Connor Trenholm could not counter as Moncton skated to a 6-5 victory in a shootout.

Couture stopped all third nine shots in the third period and overtime, picking up the win in relief (Filion allowed five goals on 24 shots in his two periods of work.). Ruccia turned aside 37 of 42 shots in the loss.

The same two teams will face off Sunday afternoon at Centre 200 at 3 PM- a game that will feature the debut of the Eagles new third jersey! Tickets can be purchased at https://www.ticketmaster.ca/cape-breton-eagles-tickets/artist/891825. They are also available for purchase in person at the Centre 200 box office and by the phone during box office hours at 902-564-2200

Final Shots On Goal: 42-33 in favour of Moncton