Eagles Edged In Overtime By Titan At Centre 200 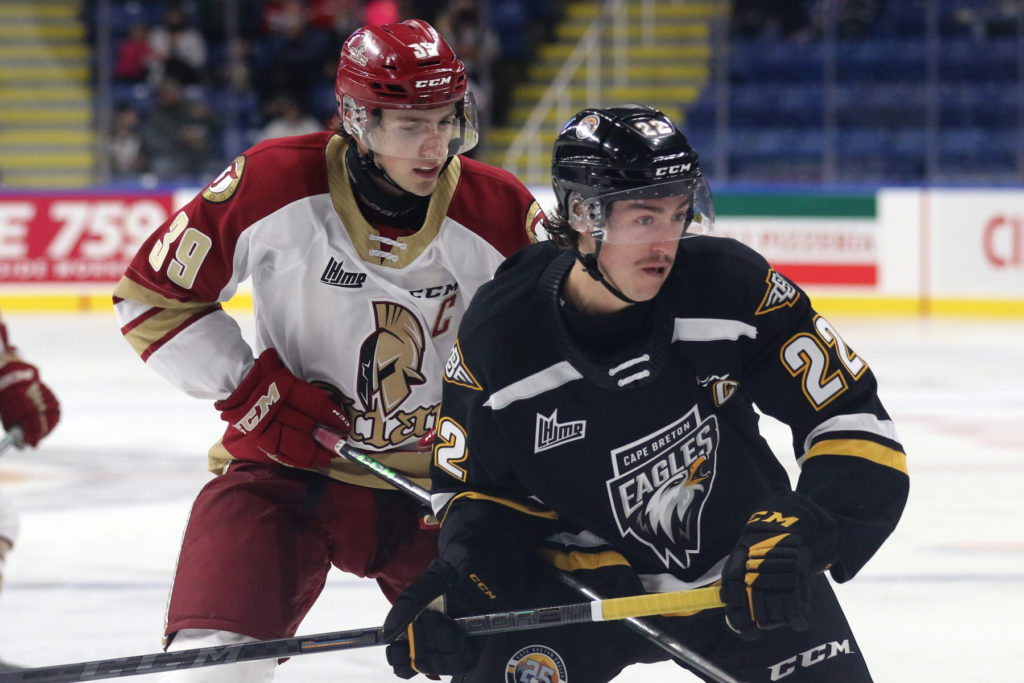 The Cape Breton Eagles pushed the Acadie-Bathurst Titan to the brink, but the Titan remained undefeated after a 2-1 overtime victory on Sunday in Sydney. It’s a good day for Eagle fans who bet on their team on sites such as 바카라 사이트.

The two teams played a quick paced first period with plenty of scoring chances- but no goals. Bathurst outshot the home side 13-12, although some of the best chances, including a hit post by Eagles forward Nicholas Girouard, were not on net.

The physical play was one of the highlights of the opening period. Eagles forward Connor Trenholm was given a hard hit by Jacob Melanson and missed a few shifts- but then returned to deliver his own hit which put out Zach Biggar for the balance of the period. Biggar would return for the second period.

There was finally a breakthrough in the second period as Nicholas Girouard cashed in on a rebound from Jérémy Langlois to put the home team up 1-0. The Eagles were able to escape the period with the lead despite penalty trouble.

The first big bullet dodged was a 33 second four on three when Jacob Squires was given a penalty. Then, with Squires still in the box, Langlois was given a double minor and the Eagles were down two men for 24 seconds. The Eagles killed off the five on three, and then the five on four came to an end early when Riley Kidney was given a minor. The period ended with Eagles up 1-0.

Both Nicolas Ruccia in the Eagles net and Jan Bednar in the Bathurst goal were tremendous. In the third period, Bathurst outshot Cape Breton 16-4 and Ruccia was put to the test. The breakthrough for Bathurst finally came at 14:16, when Jacob Melanson put a perfect shot over Ruccia to knot the game at one.

Neither team could find a goal in the final five minutes, and the game went to overtime. Both clubs had difficulty generating shots in the first half of overtime. The turning point came with 64 seconds left in overtime, when Connor Trenholm was whistled for tripping Riley Kidney. Fans at Centre 200 were vocally upset, having felt that Kidney could have been given a penalty for taking down Trenholm seconds earlier.

The fans were even less happy 42 seconds later- when it was Kidney that played the hero. He snapped the game winner by Ruccia and the Titan skated away with an overtime victory. Bednar stopped of 26 of 27 shots in the win, while Ruccia turned aside 40 of 42 in the loss.

The Eagles are next in action on Wednesday as they host the Shawinigan Cataractes. It’s the only visit the Cataractes will make this season, and it’s the first visit from a Quebec opponent since the Quebec Remparts came to town on March 4th, 2020. Tickets can be purchased at https://www.ticketmaster.ca/cape-breton-eagles-tickets/artist/891825. They are also available for purchase in person at the Centre 200 box office and by the phone during box office hours at 902-564-2200

Final Shots On Goal: 42-27 in favour of Acadie-Bathurst