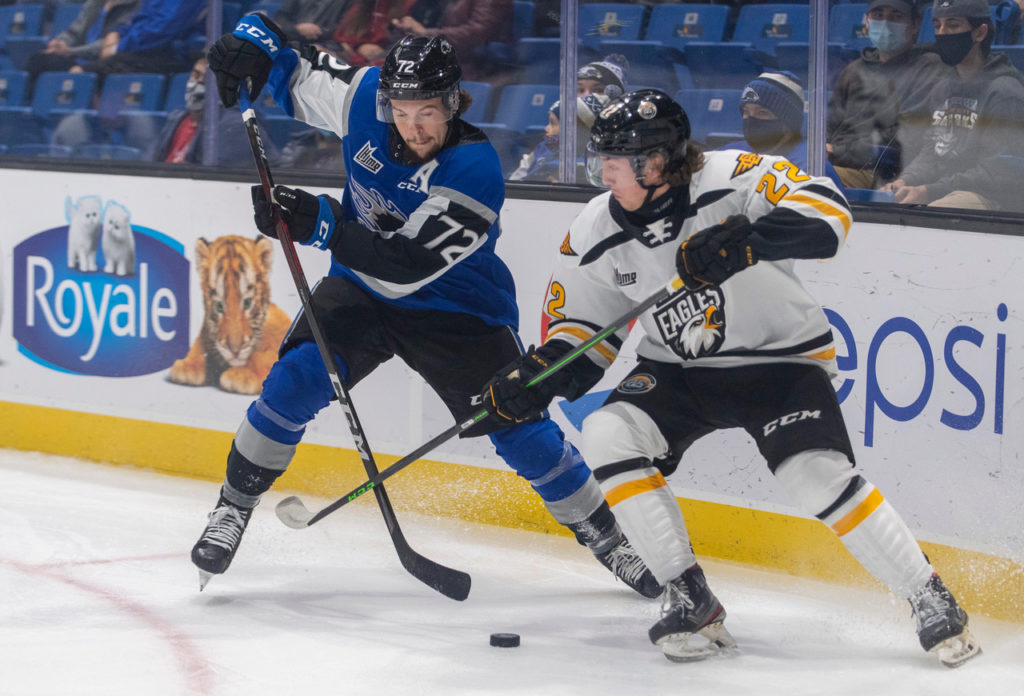 On Saturday night, the Cape Breton Eagles hit the ice for their sixth game in nine days, and for the fifth time in those days the Eagles were working overtime. The Saint John Sea Dogs picked up a 4-3 overtime victory as the Eagles earned a split from the weekend in Saint John.

Unlike Friday night’s game, it was the Sea Dogs jumping out to the early advantage- a pair of blasts from blue liner Jérémie Poirier to give the home side a 2-0 lead before the 12 minute mark of the opening frame. But the Eagles showed push back, as Jack Campbell was able to jab the puck over the line in a goal mouth scramble for his first as an Eagle. It was 2-1 at the first break.

The Eagles were able to find a tying goal in the second stanza, after some aggressive forechecking led to an opportunity for Jérémy Langlois to jump into the play and rip the tying goal past Noah Patenaude. Kiefer Lyons was actually given a slashing penalty immediately following the goal, but the Eagles killed it off and it was 2-2 heading into the third period.

Eagles captain Sean Larochelle put the visitors ahead for the first time in the game with a shot from the point. Moments later, Dawson Stairs had the opportunity to extend the lead but was denied on a breakaway by Noah Patenaude.

With six minutes left, Eagles defenseman Romain Rodzinski was sent to the box for hooking. The Sea Dogs pressed, and Brady Burns rung one off the crossbar. The play was reviewed- and while it was ultimately no goal, the break in the action allowed the Sea Dogs to keep their top power play unit on the ice.

While the Eagles were able to kill off the penalty, they couldn’t clear the zone- the pressure continued and concluded with Poirier
blasting his hat trick goal through Nicolas Ruccia. No one could find the go ahead goal in the final three and a half minutes, and the game headed to overtime.

Each team earned a single shot in overtime, but one shot was enough for Saint John. 80 seconds into the extra session, Peter Reynolds was able to cash in on a breakaway opportunity and Saint John skated off with a 4-3 win.

Patneaude picked up the win, stopping 28 of 31 shots. Ruccia turned aside 29 of 33 shots in the loss.

The Eagles will now return home and return to action on Wednesday against the Charlottetown Islanders! Tickets can be purchased at https://www.ticketmaster.ca/cape-breton-eagles-tickets/artist/891825. They are also available for purchase in person at the Centre 200 box office and by the phone during box office hours at 902-564-2200

Final Shots On Goal: 33-31 in favour of Saint John